A. EXTENSION OF DUE DATES

In view of the COVID-19 pandemic and the large-scale disruption caused as a consequence of it, the Finance Ministry has decided to extend the due dates for Income Tax Returns, Tax Audit Report, and GST Compliances. The revised due dates are as follows:

CBDT, on The Recommendation of ICAI, Extends the Last Date for Updating UDIN in all Income Tax Forms to 15th February 2021

The Central Board of Direct Taxes, on the recommendation of the Institute of Chartered Accountants of India, has extended the last date for updating UDIN in all Income Tax Forms to 15th February 2021, for treating these forms as valid.

It has been communicated by various taxpayers and professionals that the Income Tax Portal is charging a late fee u/s 234F in spite of the extension announcement dated 31st December 2020.

Several taxpayers and professionals experienced difficulty in the receipt of Aadhaar based OTP on the Income Tax Portal while filing their Income Tax Return. In this regard, the department has issued a clarification.

The Income Tax Department, via their official Twitter handle has reminded taxpayers to file their Income Tax Return, amid the request for due date extension.

The Income Tax Department carried out search and seizure action on a number of hawala operators engaged in the activity of routing and handling unaccounted cash in the Delhi region. The search action has resulted in the unearthing of incriminating evidences revealing various shell entities being used for raising bogus purchase/sale bills and routing of unaccounted funds through several layers of bank accounts. Such shell entities are closed after two months, and new ones are formed.

The search action has resulted in the seizure of unaccounted cash of Rs. 1 crore and jewelry worth Rs. 1.42 crores.

Income Tax Dept does paid promotion of #ITRFileKaroJhatpat on Twitter

The Income Tax Department recently introduced "Jhatpat Processing" for easy filing and processing of ITRs. The process has started for ITR 1 and 4. Now, the department, in order to promote the initiative, did a paid promotion on the Social Networking Site Twitter.

The Institute of Chartered Accountants of India has decided to allow one-time condonation to its members for their earlier missed or late generated UDINs. In this regard, certain decisions have been taken. To read the same, click here.

Till now, Jewelry to the tune of Rs. 9.79 lakh has been seized. The sources of acquisition of remaining jewelry found exceeding Rs. 2 crores are under verification. Cash of Rs 2.95 crore has also been seized. Overall, undisclosed income to the tune of approximately Rs. 100 crores have been unearthed so far during the Search and Survey operation. One locker has been found, which is yet to be operated.

Rs. 1,15,174 crores gross GST revenue collected in December. Revenues for December 2020 are 12% higher than the GST revenues in the same month last year

The Confederation of All India Traders has raised strong objections against the new GST provisions, especially the introduction of Section 86B which they feel are detrimental to trade. Thus, they have written a representation letter to the Union and Finance Minister Smt. Nirmala Sitharaman requesting to roll back this provision immediately.

A facility of 'Communication Between Taxpayers' has been provided on the GST Portal, for sending a notification by recipient (or supplier) taxpayers to their supplier (or recipient) taxpayers, regarding missing documents or any shortcomings in the documents or any other issue related to it. This facility is available to all registered persons, except those registered as TDS, TCS, or NRTP.

CBIC makes changes in the Tariff Value of Certain Goods

The above said firms had cumulatively taken Input Tax Credit fraudulently of Rs. 12.90 crores involving invoice value approximating Rs. 72 crores on the strength of invoices issued by non-existent firms without the actual receipt of material with an ulterior motive to defraud the government exchequer.

The Central Board of Indirect Taxes and Customs has amended the Courier Imports and Exports (Electronic Declaration and Processing) Regulations, 2010. Read the official announcement and amendments made here.

The Central Board of Indirect Taxes and Customs, via their official Twitter handle, has bewared the taxpayers on not falling prey to fraudulent calls, SMS or emails, and has clarified that the Indian Customs never calls or sends messages for paying duty in a personal bank account.

CBIC makes amendments in the Exchange Rate of Turkish Lira

CBIC has made an amendment in the Notification of the Central Board of Indirect Taxes and Customs No.113/2020-CUSTOMS (N.T.), dated 17th December 2020 with effect from 31st December 2020

In the SCHEDULE-I of the said Notification, for serial No. 18 and the entries relating thereto, the following shall be substituted, namely: 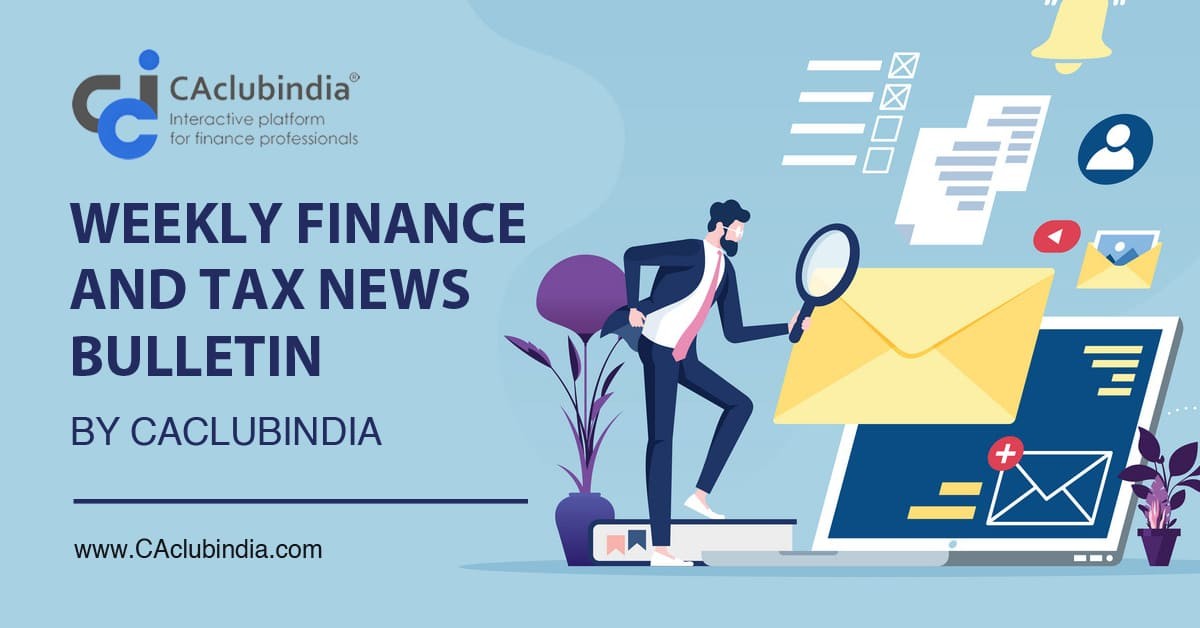 The GST Portal, via their official Twitter handle, has made the taxpayers aware of the New Rule 86(B) on 1% cash payment of the liability. Read the poster released on the same, here.

The Central Board of Indirect Taxes and Customs, via their official Twitter handle, has bewared the taxpayers of Fake Matrimonial Alliances and clarified that the Indian Customs never calls or sends messages for paying duty in a personal bank account.

9th Instalment of Rs.6,000 crore released to the States as back to back loan to meet the GST compensation shortfall

A total amount of Rs.54,000 crore released so far to all States and UTs with legislation. This is in addition to additional borrowing permission of Rs.1,06,830 lakh crore granted to the States.

CBIC releases "Misconceptions Vs. Reality" under Rule 86B

The Central Board of Indirect Taxes and Customs, via their official Twitter handle, has released "Misconceptions Vs. Reality" under Rule 86B. Read the misconceptions about the 1% payment of tax liability in cash in GST under Rule 86B here.

The Central Board of Indirect Taxes and Customs, via their official Twitter handle, has bewared the taxpayers of Free Gifts and Huge Discounts and clarified that the Indian Customs never calls or sends messages for paying duty in a personal bank account.

The Ministry of Corporate Affairs has decided to allow companies to conduct their EGMs through VC or OAVM or transact items through the postal ballot in accordance with the framework provided in the below-mentioned circulars up to 30th June 2021.

The Ministry of Corporate Affairs has clarified that there will be no change in the additional fee logic eForm MGT-7 and AoC-4/AOC-4 XBRL/AOC-4 CFS/AOC-4 NBFC for the FY 2019-20 w.e.f 01 January 2021, since the extension was provided to all the companies for conducting AGM and not for filing the form.

The Ministry of Corporate Affairs has made the Field 'SRN of the application filed for extension' (GNL-1) in eForm MGT-7 optional for FY 2019-20 w.e.f. 1st January 2021 due to blanket extension provided for all companies to conduct AGM.

The Ministry of Corporate Affairs has clarified that the last date for filing DIR-3 KYC for the Financial Year 2019-20 has expired on 31st December 2020. Consequently, the process of deactivating the non-compliant DINs is in progress and will be completed shortly.

ICAI announces regarding extension of time period, of the name reserved through SPICE+ under Rule 9, upon payment of certain fees

With regard to MCA's announcement dated 24th December 2020, wherein, the Companies (Incorporation) Third Amendment Rules, 2020 were released by the competent authority, the Institute of Chartered Accountants of India has announced regarding extension of the time period, of the name reserved through SPICE+ under Rule 9, upon payment of certain fees.

The Ministry of Corporate Affairs has made an announcement that they are likely to revise eForm SH-7 on the MCA21 Company Forms Download page w.e.f 25th December 2020.

The Competition Commission of India (CCI) approves acquisition by Jamnalal Sons Private Limited ("JSPL/Acquirer“) of 51% of the equity share capital of Mukand Sumi Special Steel Limited ("MSSSL/Target“) under Section 31(1) of the Competition Act, 2002.

Taking a major step to boost exports, the Government has decided to extend the benefit of the Scheme for Remission of Duties and Taxes on Exported Products (RoDTEP) to all export goods with effect from 1st January 2021.

The Reserve Bank of India has constructed a composite Digital Payments Index (DPI) to capture the extent of digitization of payments across the country.

To improve the Ease of Doing Business in the country, the emphasis has been on simplification and rationalization of the existing rules and the introduction of information technology to make governance more efficient and effective. Check out the entire report  here.

This report presents the performance of the banking sector, including co-operative banks, and non-banking financial institutions during 2019-20 and 2020-21 so far. The broad theme of this year's report is the impact of COVID-19 on banking and non-banking sectors, and the way forward.

The Quality Review Board of India has released a Report on Audit Quality Review wherein, they have reviewed all the aspects of how an audit was performed in entities selected on a risk-based approach and have now, published their findings on the same. To download the report, click here.

The Institute of Chartered Accountants of India is inviting comments on Exposure Drafts of Forensic Accounting and Investigation Standards. The Last Date for Submitting Comments is January 28, 2021.

The Insolvency and Bankruptcy Board of India has prepared the Provisional List of IPs prepared during the period January 1, 2021 - June 30, 2021.

The benefit of RoDTEP would be available subject to the conditions, restriction, exclusions, ineligibility, and fulfillment of the procedural requirements as notified.