The Institute of Chartered Accountants of India has decided to allow one-time condonation to its members for their earlier missed or late generated UDINs. In this regard, certain decisions have been taken. Read the official announcements and decisions taken, below:

To reinvigorate the Profession of Accountancy in this fast changing digitalized World and to curb the prevalent malpractice of fake certificates forged by non CAs, an innovative concept of Unique Document Identification Number (UDIN) was introduced by the Council of ICAI as mandatory Council Guidelines in phased manner from 1st Feb., 2019 onwards for Certificates, GST/Tax Audit & all other Attest, Assurance and Audit functions.

The UDIN Portal facilitates the Regulators / Stakeholders to check the authenticity of the report/certificates / documents on real-time basis. Gradually many Regulators / Stakeholders like SEBI, RERA, CBDT, RBI & Banks are insisting upon UDINs on all documents issued by CAs. Recently, CBDT has made mandatory validation of UDIN in all their IT Forms and Reports which are issued by members of ICAI.

ICAI has been receiving representations from its Members that they have unintentionally missed to generate UDINs on their Audit and Assurance Reports and Certificates due to prolonged lockdown, closure of offices, non-availability of human resources in offices and therefore, allow them to generate UDIN after the expiry of the permissible time limit as a one-time measure. Few members have also requested to condone the delay in generation of UDIN due to unawareness or inadvertent error. 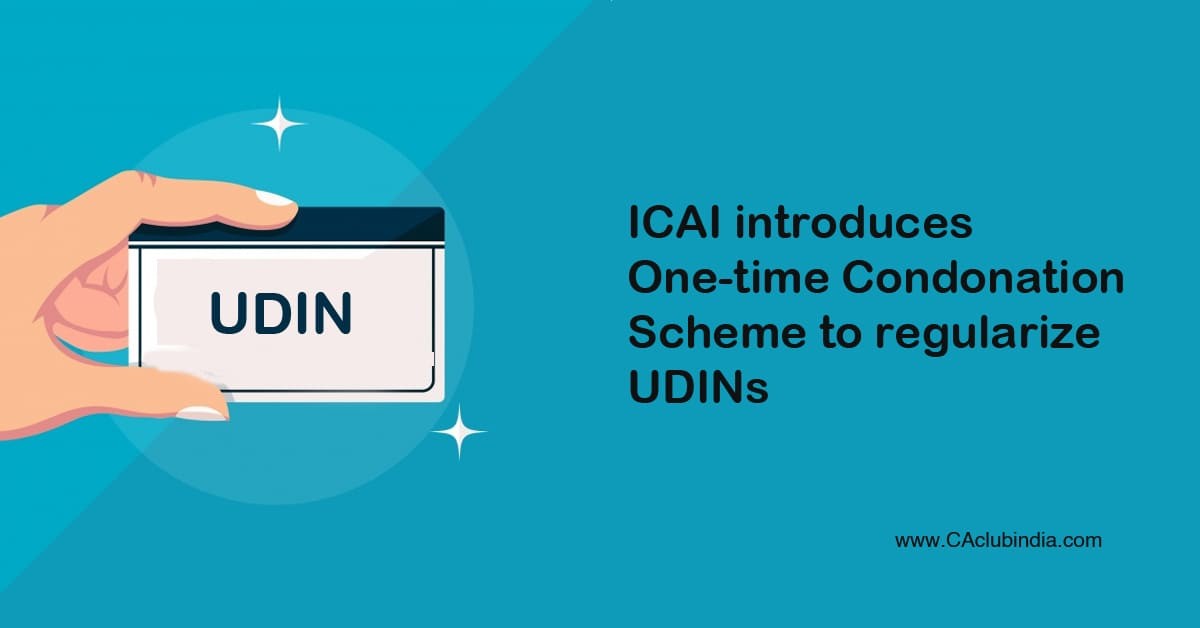 Considering various representations and the fact that UDIN being a new initiative and by the time the members were becoming well-versed and accustomed to it, the life including office work got stucked due to this pandemic, the competent authority has decided to allow one-time condonation to its members for their earlier missed or late generated UDINs.

1. As a One-time condonation scheme, to regularize the non-generation of UDIN, it has been decided that Members will be allowed to generate the earlier missed UDINs for the documents signed between 1st February 2019 to 31st December, 2020. The scheme will be made available from 1st January, 2021 till 31st January, 2021.

2. With this announcement, all delays in generation of UDINs by the members of ICAI for UDINs generated during 1st February 2019 till 31st December 2020 as a one-time measure stand condoned.

3. Members may please note that the above one-time condonation scheme would not be applicable for the documents / forms where the respective Regulators or other stakeholders require UDIN on real-time or as per their specified requirement.

4. Further, UDIN so generated has to be communicated to Management or Those Charged with Governance for disseminating it to the stakeholders from their end.

5. UDIN generated under this scheme would be treated as UDIN generated without any violation of the Gazette dated 2nd August 2019 read with 15 days window allowed for exceptional circumstances.