Arjun (Fictional Character): Krishna, many taxpayers have been receiving Show Cause Notices of service tax from the GST departments across India. Why are such notices being issued?

Krishna (Fictional Character): Arjuna, in these crucial times of Coronavirus Pandemic, when complying with the Tax deadlines is a hard nut to crack, the Central GST department has been issuing Show Cause Notices (SCN’s) for differences in receipts as per Service tax returns & Income tax returns for different FY’s- 14-15, 15-16 and so on. It seems Crores of rupees tax notices have been issued to taxpayers without proper evaluation, and even fulfilling the required law mandates. This is a critical topic to discuss.

Arjun (Fictional Character): Krishna, on what ground such notices are being issued?

Krishna (Fictional Character): Arjuna, many notices are being issued on the grounds that receipts as per Income Tax Return or taxable value as per VAT return is different as compared to receipts shown in the service tax return, on which straight away a percentage of service tax is applied. Such an amount of tax is shown payable in the notices, where such taxpayers are not even liable to pay service tax. Many professionals such as doctors have also received service tax notices, who were not at all liable to levy service tax. It can clearly be stated that no due diligence is followed while issuing many notices, and baseless grounds are used for such a purpose. 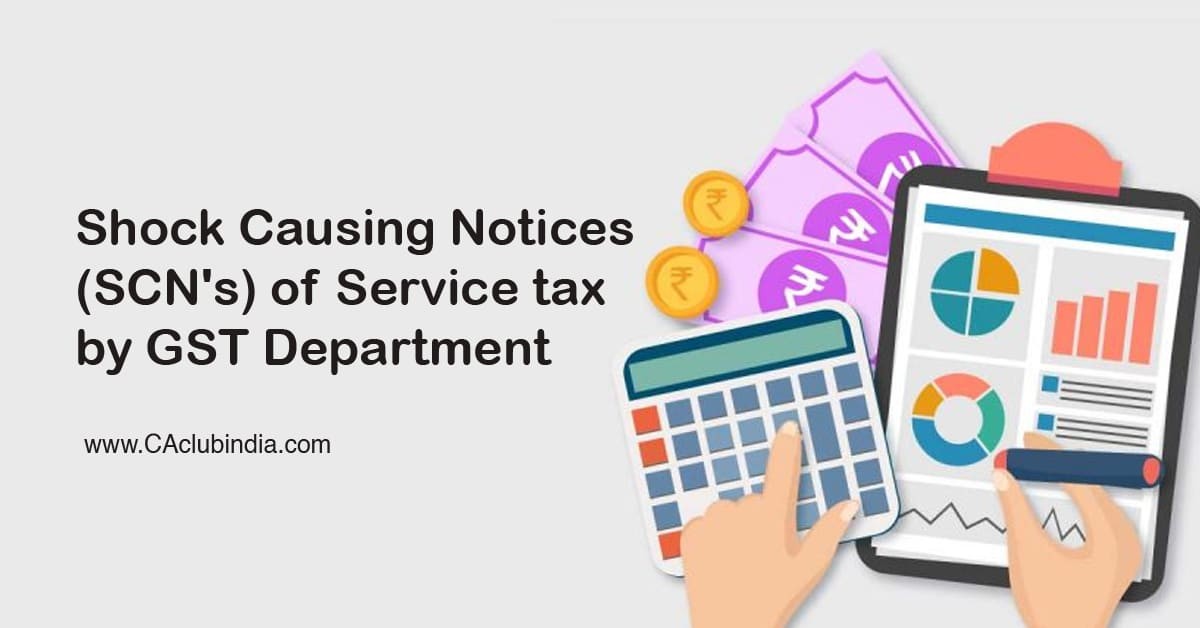 Arjun (Fictional Character): Krishna, what are the difficulties faced by the taxpayers due to these notices?

Krishna (Fictional Character): Arjuna, many notices have called upon for much older information & documents that they are not entitled to call for. Enquiry up to 5 years can be called upon only if service tax has not been paid due to fraud, collusion, willful statement, or suppression of facts. In a few cases, taxpayers are being troubled by sending notices again, whose replies have already been sent by them to the departments. Principles of natural justice, a reasonable opportunity of being heard, etc are not followed in many cases.

Arjun (Fictional Character): Krishna, what is the remedy available with the taxpayer in such a situation?

Krishna (Fictional Character): Arjuna, after receipt of the notice, the assessee can file his reply on why the extended period under section 73(1) should not be invoked, service tax recovery, interest recovery, penalty u/s 77, 78, and late fees u/s 70 not to be levied within 30 days. He will be given the opportunity for a personal hearing. After considering the representation of the person on whom notices are served, the adjudicating authority will determine the tax payable by issuing a reasoned order. This procedure is a farce. Once show cause notice is issued, demand is as good as confirmed.

An order will be issued after adjudication, in which demand may be dropped or confirmed, as the case may be. Penalty & Interest may be levied. Accordingly, tax, interest & penalties need to be paid within the given time frame. The last remedy available to the taxpayer is to go for an appeal. In a few major cases where notice is prima facie against law & strongly in favour of the taxpayer, filing a writ petition can be another option.

Arjun (Fictional Character): Krishna, what are the important points & judgments to be kept in mind while dealing with the SCN’s?

Krishna (Fictional Character): Arjuna, the followings are important points to be kept in mind :

2. Drafting mistake in amendment section 73(2A)- The amendments refer to the appellate authority, tribunal, or court, who may conclude that there was no fraud, suppression, etc. However, what happens if the adjudicating authority itself comes to the conclusion that there was no fraud, suppression, etc.? (It is assumed that adjudication, in any case, is a farce, the adjudicating authority is, in any case, going to confirm demand for all five years.)

4. If there was bona fide doubt about chargeability of service tax, the extended period of limitation is not available. If there is no mala fide intention, beyond 18 months is not sustainable.

5. If the department was itself raising demands under various categories for the same activity, departmental authorities themselves made the assessee land in total chaos and confusion. Hence they are not entitled to allege that assessee did anything or omitted to do anything with an intent to evade tax. Hence, the extended period of limitation cannot be invoked and demand beyond 30 months is to be set aside. [ Nexcus computers v/c CCE (2009) 22 STT 10 (CESTAT) ]

6. If the department itself was in doubt about the taxability of service, demand for an extended period is not sustainable. CST v/s Gujrat State Seeds Certification Agency (2013) 64 VST 433 (Guj HC DB)

8. Extended period is not invocable when earlier Tribunal decisions were in favour of the assessee, even if later the decision was overruled by a large bench. [ Nice color labs v/s CCE (2013) 31 STT 407 (CESTAT) ]

9. There can be no suppression if the assessee was ignorant – In Tamil Nadu Housing Board v/s CCE 1995 Supp(1) SCC 50 = 1994, it was observed, "intention to evade payment of duty is not mere failure to pay duty" it must be something more. "Evade" means defeating the provisions of law paying duty. It is made more stringent by the use of the word – "intent". In other words, the assessee must deliberately avoid payment of duty payable under the law.

Krishna (Fictional Character): Arjuna, it is totally unjust action taken by the tax departments against few taxpayers. Many show cause notices are mere illegal and putting the taxpayers in a dilemma by using words such as suppression, intend to evade tax, failed to pay, failed to assess, etc. Still, notices have been sent in bulk, without the satisfaction of purpose. Taxpayers & tax organizations have raised this concern with the Finance Minister in this regard. Let’s hope that genuine taxpayers will not be harassed. It is a "Shock Causing Notice" instead of a "Show Cause Notice" for many taxpayers.