Practical Application of CARO, 2015 (through FAQs)

The text of the Order is available on the following URL
http://www.mca.gov.in/Ministry/pdf/Companies_Auditors_Report_Order_2015.pdf

Let us look at some of the frequently asked questions on CARO, 2015 (hereinafter referred to as CARO)

Which companies are exempt from the applicability of CARO?

CARO is not applicable to the following companies:

Which are the select class of private companies to which CARO is not applicable?

CARO is not applicable to private limited companies which fulfils all the following conditions throughout the reporting period covered by the audit report :

(i) its paid-up capital and reserves are Rs 50 lacs or less;

(ii) its outstanding loan from any bank or financial institution are Rs 25 lacs or less; and

(iii) its turnover does not exceed Rs 5 crores

What is the definition of Small Company under the Companies Act, 2013?

Sec 2(85) of the Companies Act, 2013 defines a small company. As present, It is a private company whose paid-up share capital does not exceed Rs 50 lacs and turnover as per its last profit and loss account does not exceed Rs 2 crores

Provided that nothing aforesaid shall apply to (A) a holding company or a subsidiary company; (B) a company registered under section 8; or (C) a company or body corporate governed by any special Act;

Has ICAI issued any guidance on reporting under CARO 2015?

Yes, the ICAI has issued guidance note. The same may be accessed using the following link: http://resource.cdn.icai.org/37394aasb26880new.pdf

Is the Statement on CARO, 2003, issued by the Institute of Chartered Accountants of India still relevant?

Yes. ICAI in para 2 of its document for guidance on reporting under CARO 2015 states as follows:

The statement on the CARO, 2003 issued by ICAI can be accessed using the following link: http://resource.cdn.icai.org/18798announ10264a.pdf

Has the term “paid up capital” been defined in Companies Act, 2013?

Has the term “reserves” been defined in the Companies Act, 2013?

No, the term “reserves” has not been defined under the Companies Act, 2013. However, the Guidance Note on Terms Used in Financial Statements issued by ICAI defines the term “reserve” as, “The portion of earnings, receipts or other surplus of an enterprise (whether capital or revenue)appropriated by management for a general or specific purpose other than provision for depreciation or diminution in the value of assets or for a known liability. The reserves are primarily of two types: capital reserves and revenue reserves”. One may also refer Para 18 of the Statement on CARO 2003 for further clarification.

Has the term “turnover” been defined in the Companies Act, 2013?

Yes, the term “turnover” has been defined in Section 2(91) of the Companies Act, 2013 to mean the aggregate value of the realisation of amount made from the sale, supply or distribution of goods or on account of services rendered, or both, by the company during a financial year. One may also refer Para 23 of the Statement on CARO 2003 for further clarification.

Will CARO be applicable to a small company which has a loan outstanding exceeding 25 lacs from any bank or financial institution?

Can the applicability of CARO 2015 be illustrated through some examples? 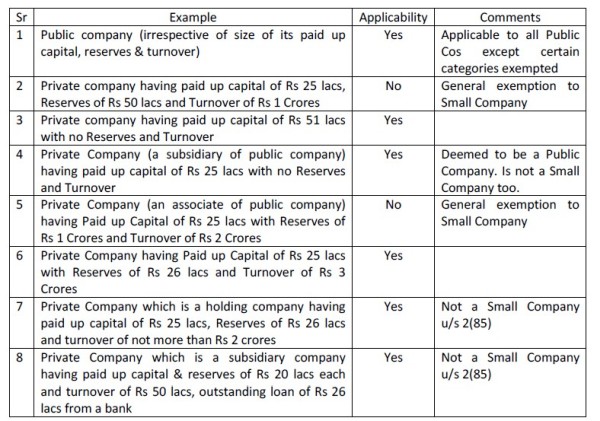 While reporting on the requirements of CARO, 2015, is a reference thereto also needs be added to the main audit report?

Yes, while reporting on the requirements of CARO, 2015, a reference thereto also needs be added in the main audit report under the “Report on Legal and Other Regulatory Matters” paragraph

Is there any specimen format for the aforesaid reporting?

Yes, the Auditing and Assurance Standards Board of ICAI has issued the following illustrative format in terms of its recent guidance on reporting under CARO, 2015. The same is reproduced as follows:

“Report on Other Legal and Regulatory Requirements

As required by the Companies (Auditor’s Report) Order, 2015 (“the Order”), issued by the Central Government of India in terms of sub-section (11) of section 143 of the Companies Act, 2015, we give in the Annexure a statement on the matters specified in paragraphs 3 and 4 of the Order, to the extent applicable.

Disclaimer by the Author