In the current write up, we have explored this concept of Key Managerial Personnel as put forth in the Companies Act, 2013 read with the relevant rules made thereunder.

WHO IS A KEY MANAGERIAL PERSONNEL?

The definition of the term Key Managerial Personnel is contained in Section 2(51) of the Companies Act, 2013. The said Section states as under:

Let us now proceed to understand how these six personnel are defined under the Act. 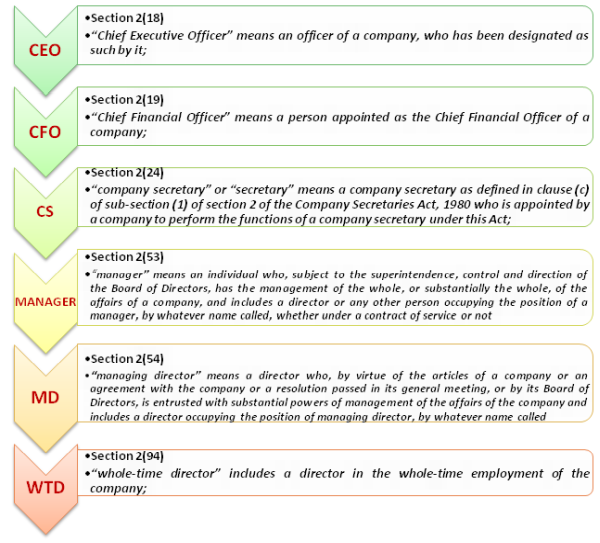 The above definitions depict that in the case of CEO and CFO, the designation is crucial to deem the person as CEO and CFO whereas in the case of MD and Manager the functions discharged or the role performed by an individual is taken as the test to deem them as the MD or Manager. The definition of whole time director is an inclusive definition and CS is defined to mean a CS as per the Company Secretaries Act, 1980 who is duly appointed to perform the functions of a company secretary.

WHICH COMPANIES ARE MANDATORILY REQUIRED TO APPOINT KEY MANAGERIAL PERSONNEL

As per Section 203 of the Companies Act, 2013 read with the Companies (Appointment and Remuneration of Managerial Personnel) Rules, 2014, the following class of Companies, namely

� Every listed company, and

��Every other public company having paid up share capital of Rs. 10 Crores or more

shall have the following whole-time key managerial personnel,�

(i) Managing Director, or Chief Executive Officer or manager and in their absence, a whole-time director;

Further, as per recently notified Rule 8A of the Companies (Appointment and Remuneration of Managerial Personnel) Rules, 2014, a company other than a company which is required to appoint a whole time key managerial personnel as discussed above and which is having paid up share capital of Rs. 5 Crores or more shall have a whole time Company Secretary.

MANNER OF APPOINTMENT OF KMP

��Every whole-time key managerial personnel of a company shall be appointed by means of a resolution of the Board containing the terms and conditions of the appointment including the remuneration.

� If the office of any whole-time key managerial personnel is vacated, the resulting vacancy shall be filled-up by the Board at a meeting of the Board within a period of 6 months from the date of such vacancy.

��Same person not to act as Chairman and MD/CEO

However, in the following circumstances, the above restriction will not apply:

(a) the articles of the company contain provision for appointment of same person, or

(b) the company carries only a single business, or

It has been provided under the Act that a whole-time key managerial personnel shall not hold office in more than one company at the same time, except:

o�As a MD, if he is the managing director or manager of one and of not more than one other company and such appointment or employment is made or approved by a resolution passed at a meeting of the Board with the consent of all the directors present at the meeting and of which meeting, and of the resolution to be moved thereat, specific notice has been given to all the directors then in India.

OTHER PROVISIONS REGARDING KMP

��A KMP is included within the meaning of �Officer in Default� under the Act.

��A document or proceeding requiring authentication by a company; or contracts made by or on behalf of a company, may be signed by any key managerial personnel or an officer of the company duly authorised by the Board in this behalf.

��Details regarding KMP, changes therein and the remuneration paid to them are required to be disclosed in the Annual Return of the Company.

��Explanatory statement should disclose the nature of concern or interest, financial or otherwise, of every key managerial personnel, in respect of each items of special business to be transacted at a general meeting.

��A person whose relative is employed as a KMP in a company is disqualified to be appointed as auditor in that company.

��A person is disqualified to be appointed as an independent director if he either himself or through his relative holds or has held the position of a key managerial personnel of the company or its holding, subsidiary or associate company in any of the 3 financial years immediately preceding the financial year in which he is proposed to be appointed.

� Company is required to maintain a register of the KMPs at its registered office containing particulars which shall include the details of securities held by each of them in the company or its holding, subsidiary, subsidiary of company�s holding company or associate companies.

��A return of every appointment and change in KMP has to be filed with the ROC within 30 days of the appointment or the change as the case may be.

� The key managerial personnel shall have a right to be heard in the meetings of the Audit Committee when it considers the auditor�s report but shall not have the right to vote.

� The remuneration policy of the KMP is to be recommended by the Nomination and Remuneration Committee who should ensure that the policy involves a balance between fixed and incentive pay reflecting short and long-term performance objectives appropriate to the working of the company and its goals. Such policy shall be disclosed in the Board's report.

� Every key managerial personnel shall, within a period of 30 days of his appointment, or relinquishment of his office, as the case may be, disclose to the company the particulars specified in sub-section (1) of section 184 relating to his concern or interest in the other associations which are required to be included in the register under that sub-section or such other information relating to himself as may be prescribed.

���Key Managerial Personnel are prohibited to make forward dealings and insider trading in securities of the company.

���Financial statements of a company are required to be signed either by the Chairperson of the company (where he is authorised by the Board) or by two directors out of which one shall be managing director and the Chief Executive Officer, if he is a director in the company, the Chief Financial Officer and the company secretary of the company, wherever they are appointed.