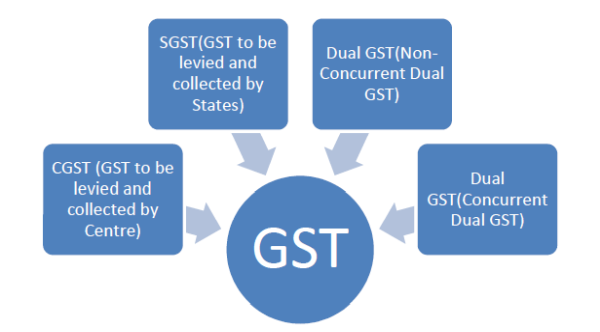 CGST: - Under this option, the two levels of government would combine their levies in the form of a single National GST, with appropriate revenue sharing arrangements among them. In the case of a Central GST (where all goods and services are taxed by the Central government only), the Centre will collect most of the country’s total tax revenue, leaving very little for the sub national Governments.

SGST: - The second model is to have a State GST in which the States alone levy GST and the Centre withdraws from the field of GST or VAT completely. In this case, the State GST will work as the redistributing mechanism. The loss to the Centre from vacating this tax field could be offset by a suitable compensating reduction in fiscal transfers to the States. This would significantly enhance the revenue capacity of the States and reduce their dependence on the Centre.

Non-Concurrent Dual GST: -Under this model, GST on goods can be levied by the States only and on services by the Centre only. The States already have the power to levy the tax on the sale and purchase of goods (and also on immovable property), and the Centre for taxation of services. No special effort would be needed for levying a unified Centre tax on interstate services. This model of dual GST would not be acceptable to the Centre as well as the States. Hence, the Government has already announced its intention to follow the Concurrent Dual GST.

Indian GST model would be Concurrent Dual GST consisting both the Central GST and State GST levied on same base. Under this model, GST will be levied by both tiers of Governments concurrently. There will be Central GST to be administered by the Central Government and there will be State GST to be administered by State Governments. In this model, both goods and services would be subject to concurrent taxation by the Centre and the States. All types of goods and services will be brought under this proposed GST structure except few exceptions.

• Single Registration:- There would a single registration or taxpayer identification number, based on the Permanent Account Number (PAN) for direct taxation. Three additional digits would be added to the current PAN to identify registration for the Centre and State GSTs.

• Uniform Method:- Procedures for collection of Central and State GSTs would be uniform. Moreover, tax payment challan might contain some additional information, e.g., amount of CGST paid on SGST challan, and vice-a-versa. Payment of tax might be only online through net-banking.

• One Common Return:- There would be one common tax return for both taxes, with one copy given to the Central authority and the other to the relevant State authority electronically. Moreover, most likely, GST returns will be required to be filed online.

• Classification of goods & services:-HSN will form the basis of product classification for Central GST and State GST.

• For the purpose of assessment and administration of different assesses, following categorization has been recommended:-

Threshold limit (common for goods and services) can be allowed somewhere between Rs. 10 lacs and Rs. 20 lacs.

Gross turnover of goods upto Rs. 1.5 Crores may be assigned exclusively to the State;

Gross turnover of services upto Rs. 1.5 Crores may be assigned exclusively to the Centre. 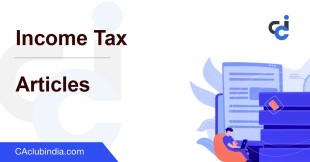 Inspections under GST - When & who can be inspected?