Recently Haryana VAT department has released a circular which might be of interest to the developers & builders across the state and conducting operations in Haryana. The Circular is No. 152/ST-1 dated 7th May, 2013 wherein several aspects in regard to taxability of civil works contracts/ builders and developers are clarified by the department. 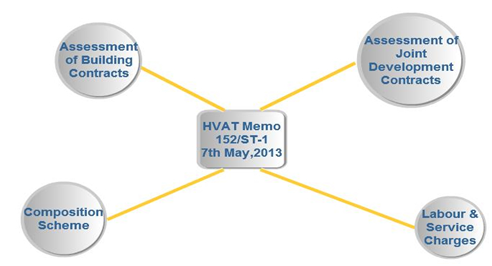 As mentioned in above diagram, broadly the circular is distributed in four parts, i.e.:-

a) Assessment of taxability in Building Contracts

b) Assessment of taxability in Joint Development Contracts

Below is the detailed analysis of the circular and how it affects the trade community at large.

i. As per provisions of Haryana VAT Act, 2003 r.w. Haryana VAT Rules it is clarified that the agreements entered with prospective buyers for sale of constructed flats, apartments or other buildings by builders and developers amounts to transfer of property in goods involved in the execution of a works contract and thus liable to tax.

ii. The above is supported by "sale" as defined under clause (ii) of section 2(1)(ze) of the HVAT Act includes "the transfer of property in goods (whether as goods or in some other form) involved in the execution of a works contract." The term "works contract" has been defined under Section 2(1)(zt) which "includes any agreement for carrying out for cash, deferred payment or other valuable consideration, the assembling,construction, building, altering ,manufacturing, processing fabrication, installation, fitting out, improvement, repair or commissioning of any movable or immovable property."

iii. Agreements or contracts entered into by the developers or others with prospective customers for sale of fully constructed apartments or flats or other buildings before the commencement of actual construction or before completion of construction, should be treated as agreements or contracts for execution of works contract of construction of building as held by the Hon'ble Supreme Court in the case of K. Raheja Development Corporation v/s State of Karnataka (reported in 141 STC at page 298). It is still a good law and has not been reversed by the Hon'ble Supreme Court in any subsequent judgment.

iv. The developers/ promoters/ builders are liable to pay tax as works contractors. They need to be registered under the HVAT Act and are required to file their returns in form VAT R-1 or VAT R-6, as the case may be, disclosing the correct amount of total receipts, including the receipts from the prospective buyers of constructed residential/ commercial properties/ buildings.

B) Assessment of tax in cases of Joint Development Agreements

(i) Process explained by the Circular

a. In the case of Joint Development Projects, where typically there is an agreement between the owner of a land and a developer to develop such land which involves construction of a building or buildings (residential or commercial) on such land, there is an understanding that an agreed portion of the constructed building would be transferred by the developer to the land owner.

b.  The developer would be given the right of selling or transferring the balance portion of the constructed building along with the undivided share in the land on which it is built. The developer would then enter into agreement for construction of flats or apartments or the other built up areas with customers or for sale of constructed flats or apartments or other built up areas.

What is declared by developers?

d. A developer constructing a building in pursuant to a joint development agreement declares only part of the amounts received from his customers with whom he has entered into construction agreement as his turnover relating to the transfer of property in goods in the execution of such works contract. He would not declare the balance amounts received from the customers towards transfer of undivided share of land on which flat or other built up area is constructed and sold to them as part of his turnover. Similarly, he would not declare the value of goods transferred in the construction of the building relating to the share of the land owner as part of his turnover on the ground that no consideration is received from the land owner on such transaction.

Department’s view on above

The quantum of consideration in various cases

f. Case 1: The developer in most of the cases collects amounts separately from his customers towards the transfer of undivided share of land on which their earmarked flat or other built up area is constructed. The aggregate of all such amounts would be the consideration that is to be taken as payable by the land owner towards construction of his share in the project.

g. Case 2: Where such amounts are not collected separately, the aggregate of amounts declared by the developer to be the value of undivided share of land transferred to the customers while registering with relevant authorities transfer of such land along with the customer's portion of the building constructed on it, would be the consideration that is to be taken as payable by the land owner towards construction of his share in the project.

h. Case 3: In case where the value of the undivided share of land transferred is not declared separately at the time of registration, the aggregate of the amounts fixed under the relevant law (circle rate) for the purpose of payment of fee or consideration that is to be taken as payable by the land owner towards construction of his share in the project.

The following amounts payable by the land owner towards construction of his share of the building should be taken as part of the total consideration or total turnover relating to the works contract executed by the developer and assessed to tax after adding it to the total consideration or total turnover declared by the developer, if not already included, taxable turnover in such cases shall be determined after allowing the deductions as provided in the HVAT Act and Rules.

Above to be assessed monthly or other periodical receipts declared by the developer or builder as received from his customers. Further, on the date of handing over possession of the land owner's share of constructed building to the land owner, it shall be taken that the consideration towards such construction has been made in full and added to the total turnover of the developer or builder or dealer, if not already declared.

a) The aggregate of amounts received from his customers by the developer with whom he has entered into construction agreements or entered into agreements for sale of constructed building before completion of such building, towards transfer of undivided share of land to them or

Where the Land owner is himself a Works Contract dealer

a) Value of Land to be considered or not:-

Where a builder or developer has opted for payment of tax on his turnover relating to transfer of property in goods involved in execution of works contract under the composition scheme as provided under Section 9 of the HVAT Act, the total consideration on which such dealer is liable to tax would not include the amount received from the customers towards their undivided share in land. However, as explained earlier, in the case of joint development projects this exclusion would not be applicable. Further, deduction is allowable towards amounts paid to sub-contractors as per the provisions of the HVAT Act.

Measure of tax and deductions

a) The cost of incorporation of the goods in the works cannot be made a part of the measure for levy of tax contemplated by article 366(29-A) (b).

b) The computation and valuation shall be done as per valuation provisions of the act r.w. Rule 25 interalia of HVAT rules.

Author is practicing Chartered Accountant in New Delhi and specialising in Indirect Taxes, Corporate Laws and Transfer Pricing. He can be reached at ankitgulgulia@gmail.com

DISCLAIMER: This article is provided purely for your information only and you should check other information sources before taking any action based on any of the content in this article. Neither the authors nor website hosting the article make any warranty as to the quality or currency of the information contained in any of the site's articles.