MCA advertisement for awareness of general public who invest in Deposit Scheme of Companies. 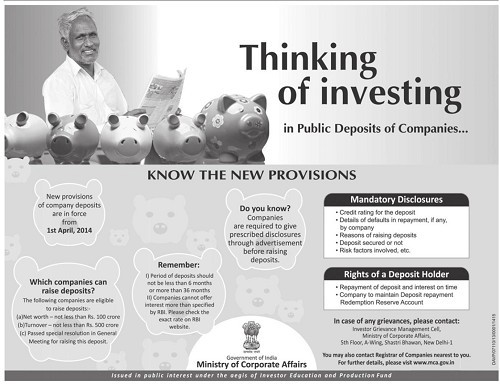 Recently, MCA came out with an advertisement in national dailies apprising the investors of the new regulations which the Companies should follow while inviting deposits from general public.

This is a very desirable measure on the part of Ministry. This shall go a long way in educating gullible investors who easily fall prey to lucrative deposit schemes of Companies. The general public while investing in such companies is poorly left unaware of the avenues where the companies shall invest the depositor’s money. The Government’s apathy towards educating the stakeholders to their rights and privileges gives a free hands to Companies to invest deposits in non stated avenues while recklessly flouting the legal provisions.

Through this exhibit, MCA has tried to educate general public about Sec 73 and Sec 76 of Companies Act, 2013 and The Companies ( Acceptance of Deposit) Rules, 2014. This is directed to help stakeholders exercise due caution before investing their money in seemingly attaractive deposit schemes of Companies. The Ministry has also tried to instruct stakeholders to check the various mandatory disclosures to be made by Company before introducing any deposit scheme.

Apparently, this may seem to be a non related advertisement to majority of readers. But, surprisingly there is also a vast strata of population who invest in such Companies (majorly infrastructure and Real Estate developer Companies) scheme of deposits in smaller towns and cities. ( Recall Pearl group going bust after it defaulted in payment to stakeholders)

This shall also ensure that large companies work in stakeholders interest since their actions, decisions shall be closely monitored by the general public.

- the rights of general public in AGM,

- the power of resolutions,

- the meaning of rights issue,

- the responsibilities and duties of directors etc.

Merely enacting a new act to strengthen the regulatory mechanism may not serve an effective purpose, unless the stakeholders are informed of the provisions of law and their rights under the newly enacted/ refurbished law.

Through such exhibits MCA shall be duly benefiited since educating stakeholders is the best antidote to regulate defaulting, bogus and fraudulent companies. By delegating this duty to stakeholders, MCA is able to exercise an effective supervision and control over Companies.

A highly welcomed initiatives by MCA.