Roles and Responsibilities of Directors under the New Regime


Who is a Director?

- An appointed or elected member of the board of directors of a company.

- He has the responsibility for determining and implementing the company’s policy.

- A company director need not

i. to be a shareholder or

ii. an employee, and

iii. may hold only the office of director under the provisions of the Act. 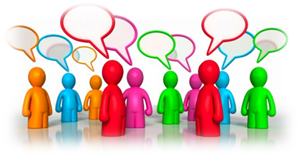 - Directors derive their powers emanating from board resolutions

- Unlike employees, cannot absolve themselves of their responsibility for the delegated duties.

Section 2(34) of the Companies Act, 2013 defines a director as – “director” means a director appointed to the Board of a company.

Disqualifications for appointment as director

A person shall not be eligible for appointment as a director of a company, if — 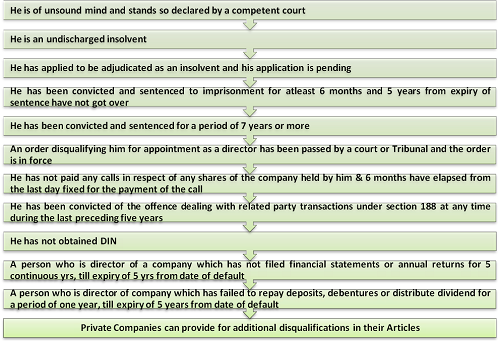 ROLE OF DIRECTORS IN A COMPANY

A Director is part of a collective body of Directors called the Board, responsible for the superintendence, control and direction of the affairs of the Company.

“officer” includes any director, manager or key managerial personnel or any person in accordance with whose directions or instructions the Board of Directors or any one or more of the directors is or are accustomed to act.

“key managerial personnel”, in relation to a company, means—

(iv) the Chief Financial Officer; and

(v) such other officer as may be prescribed;

Director as “Officer in default”

“officer who is in default”, for the purpose of any provision in this Act which enacts that an officer of the company who is in default shall be liable to any penalty or punishment by way of imprisonment, fine or otherwise, means any of the following officers of a company, namely:—

(iii) where there is no key managerial personnel, such director or directors as specified by the Board in this behalf and who has or have given his or their consent in writing to the Board to such specification, or all the directors, if no director is so specified;

(iv) any person who, under the immediate authority of the Board or any key managerial personnel, is charged with any responsibility including maintenance, filing or distribution of accounts or records, authorises, actively participates in, knowingly permits, or knowingly fails to take active steps to prevent, any default;

(v) any person in accordance with whose advice, directions or instructions the Board of Directors of the company is accustomed to act, other than a person who gives advice to the Board in a professional capacity;

- Director to act in accordance with AOA.

- A director of a company shall act in good faith in order to promote the objects of the company for the benefit of its members as a whole, and in the best interests of the company, its employees, the shareholders, the community and for the protection of environment.

- A director of a company shall not involve in a situation in which he may have a direct or indirect interest that conflicts, or possibly may conflict, with the interest of the company.

- A director of a company shall not achieve or attempt to achieve any undue gain or advantage either to himself or to his relatives, partners, or associates

- A director of a company shall not assign his office and any assignment so made shall be void. 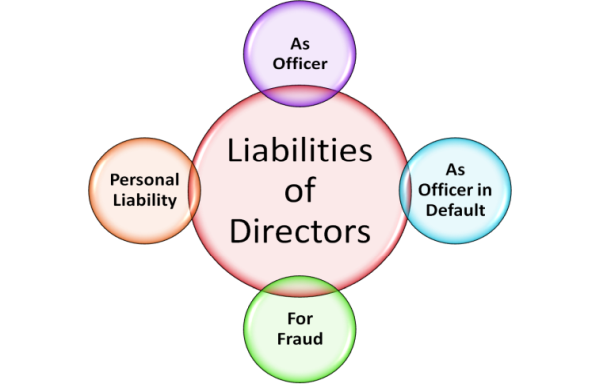 An independent director and a non-executive director not being promoter or key managerial personnel, shall be held liable, only in respect of such acts of omission or commission by a company which had occurred with his knowledge, attributable  through Board processes, and with his consent or connivance or where he had not acted diligently. 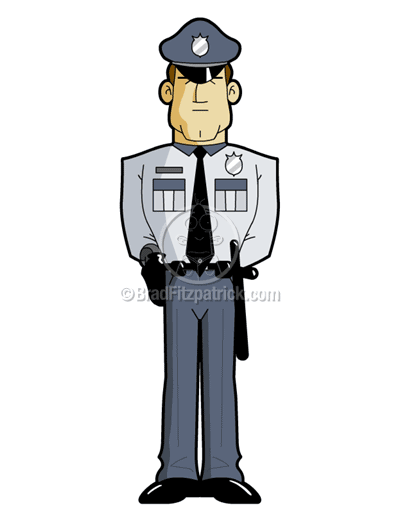 If any officer of the company—

(a) knowingly conceals the name of any creditor entitled to object to the reduction;

(b) knowingly misrepresents the nature or amount of the debt or claim of any creditor; or

(c) abets or is privy to any such concealment or misrepresentation as aforesaid, he shall be liable under section 447.

If for the purpose of any meeting of a company, invitations to appoint as proxy a person or one of a number of persons specified in the invitations are issued at the company’s expense to any member entitled to have a notice of the meeting sent to him and to vote thereat by proxy, every officer of the company who knowingly issues the invitations as aforesaid or wilfully authorises or permits their issue shall be punishable with fine which may extend to one lakh rupees.

Provided that an officer shall not be punishable under this sub-section by reason only of the issue to a member at his request in writing of a form of appointment naming the proxy, or of a list of persons willing to act as proxies, if the form or list is available on request in writing to every member entitled to vote at the meeting by proxy.

Every officer of the company whose duty is to give notice under this section and who fails to do so shall be liable to a penalty of twenty-five thousand rupees.

Section  207 (Conduct of Inspection and Enquiry)

If a director or an officer of the company has been convicted of an offence under this section, the director or the officer shall, on and from the date on which he is so convicted, be deemed to have vacated his office as such and on such vacation of office, shall be disqualified from holding an office in any company.

On receipt of the investigation report, the Central Government may, after examination of the report (and after taking such legal advice, as it may think fit), direct the Serious Fraud Investigation Office to initiate prosecution against the company and its officers or employees, who are or have been in employment of the company or any other person directly or indirectly connected with the affairs.

Notwithstanding anything contained in this Act or in any other law for the time being in force, the investigation report filed with the Special Court for framing of charges shall be deemed to be a report filed by a police officer under section 173 of the Code of Criminal Procedure, 1973 of the company.

If any director or officer of the company contravenes the provisions of this section, the director or the officer of the company who is in default shall be punishable with imprisonment for a term which may extend to six months or with fine which shall not be less than twenty-five thousand rupees but which may extend to five lakh rupees, or with both.

Liability as “Officer in Default”

- Directors are liable as officers in default under all sections where specific penalty is provided for each officer in default.

- Where no specific penalty is provided under the Act, they are liable under Section 450.

“Fraud” in relation to affairs of a company or any body corporate, includes any act, omission, concealment of any fact or abuse of position committed by any person or any other person with the connivance in any manner, with intent to deceive, to gain undue advantage from, or to injure the interests of, the company or its shareholders or its creditors or any other person, whether or not there is any wrongful gain or wrongful loss; 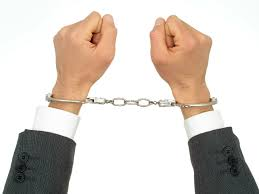 Directors can be made personally liable if:

- When the directors enter into contract in their own name.

- When they enter into contracts on behalf of company but fails to use “LTD. Or PVT LTD.”

- When directors exceeds their powers

Where it is proved that a prospectus has been issued with intent to defraud the applicants for the securities of a company or any other person or for any fraudulent purpose, every person concerned shall be personally responsible, without any limitation of liability, for all or any of the losses or damages that may have been incurred by any person who subscribed to the securities on the basis of such prospectus.

Where a company fails to repay the deposit or part thereof or any interest thereon referred to in section 74 within the time specified in sub-section (1) of that section or such further time as may be allowed by the Tribunal under sub-section (2) of that section, and it is proved that the deposits had been accepted with intent to defraud the depositors or for any fraudulent purpose, every officer of the company who was responsible for the acceptance of such deposit shall, without prejudice to the provisions contained in subsection (3) of that section and liability under section 447, be personally responsible, without any limitation of liability, for all or any of the losses or damages that may have been incurred by the depositors.

If in the course of the winding up of a company, it appears that any business of the company has been carried on with intent to defraud creditors of the company or any other persons or for any fraudulent purpose, the Tribunal, on the application of the Official Liquidator, or the Company Liquidator or any creditor or contributory of the company, may, if it thinks it proper so to do, declare that any person, who is or has been a director, manager, or officer of the company or any persons who were knowingly parties to the carrying on of the business in the manner aforesaid shall be personally responsible, without any limitation of liability, for all or any of the debts or other liabilities of the company as the Tribunal may direct.