Refund of ST to exporter of services

The Central Government hereby directs that there shall be granted rebate of the whole of the duty paid on excisable inputs or the whole of the service tax and cess paid on all input services (herein after referred to as 'input services'), used in providing service exported in terms of rule 6A of the said rules, to any country other than Nepal and Bhutan.

Meaning of “Export of Service”

(1) The provision of any service provided or agreed to be provided shall be treated as export of service when,-

(a)  the provider of service is located in the taxable territory ,

(b) the recipient of service is located outside India,

(c) the service is not a service specified in the section 66D of the Act,

(d)  the place of provision of the service is outside India,

(e) the payment for such service has been received by the provider of service in convertible foreign exchange, and

(f) the provider of service and  recipient of service  are not merely establishments of a distinct person in accordance with  item (b) of Explanation 2 of clause (44) of section 65B of the Act.

(2) Where any service is exported, the Central Government may, by notification, grant rebate of service tax or duty paid on input services or inputs, as the case may be, used in providing such service and the rebate shall be allowed subject to such safeguards, conditions and limitations, as may be specified, by the Central Government, by notification.”

(a) That the service has been exported in terms of rule 6A of the said rules;

(b) That the duty on the inputs, rebate of which has been claimed, has been paid to the supplier;

(c) That the service tax and cess, rebate of which has been claimed, have been paid on the input services to the provider of service;

Provided if the person is himself is liable to pay for any input services; he should have paid the service tax and cess to the Central Government.

(d) The total amount of rebate of duty, service tax and cess admissible is not less than one thousand rupees;

(e) No CENVAT credit has been availed of on inputs and input services on which rebate has been claimed; and

(i) The duty or, as the case may be, service tax and cess, rebate of which has been claimed, has not been paid; or

(ii) The service, rebate for which has been claimed, has not been exported; or

(iii) CENVAT credit has been availed on inputs and input services on which rebate has been claimed, the rebate paid, if any, shall be recoverable with interest in accordance with the provisions of section 73 and section 75 of the Finance Act, 1994 (32 of 1994)

- Rule 6A do not determine taxability of a service.

- If a service is not taxable at  all as per Finance Act, 1994, it cannot  be made taxable on the basis of Rule 6A of Service Tax Rules. 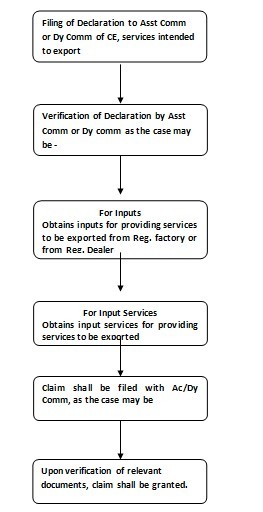 - In Jindal Steel and Power V. CCE (2008) 14 STT 443 CESTAT, it was observed that when service is rendered outside India and payment was also made outside India, service tax is not leviable.