Real stories of fighters who succeeded in CA after major struggle

Heroes of CA who didn't give up and won the fight:

Sylvester Stallone has wonderfully quoted, 'Going in one more round when you don't think you can, that's what makes all the difference in your life.' CA Final May 19 Results were declared last week. A total of 1,04,081 students wrote the exam this year out which only 22,679 cleared the exam, which means almost 79% of the total students failed. Failing multiple times causes pessimism, the worst thing that failure does to you is leave you in a state of self doubt. Sometimes the pursuit of your dreams gets so tough that giving up seems the only way out. While the thought of walking away sounds so appealing, learn about these people who have been through the same or even worse but always decided to go that one more round.

Here we are listing 5 Chartered Accountants who didn't give up and won the fight: 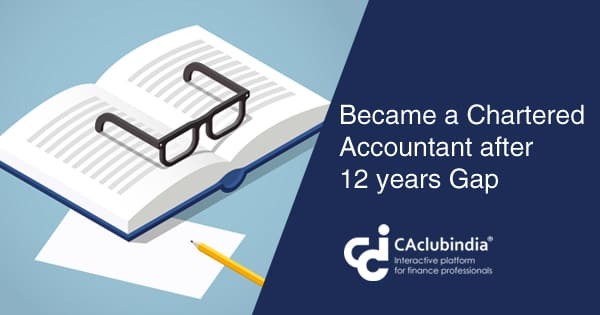 Two decades, yes you read it right Indira waited for 20 long years to complete her CA. Her dream took its first flight in the year 1999 when she cleared her CA foundation. She cleared her IPCC in 2002 and completed her articleship before giving her Finals. Everything was going as planned until then. Indira  then decided to get married. ' I was so tied up with family responsibilities that the dream of becoming a Chartered Accountant became distant', told Indira . Years after her marriage while she was looking for a job, she thought to give her career another shot  and revalidated her registration in 2014 and after that she never looked back. She started with what she had left incomplete 12 years back. 12 years is not a short time. The syllabus had been revised, the exam pattern had undergone changes but she caught up with everything because she had that determination. The journey after that was not very easy but she still continued. After appearing in multiple attempts Indira cleared her Group 1 in May 17 and kept trying for Group 2 till November 18. Her journey to become a CA has been a roller coaster ride. ' Oh! I can't express enough how overwhelmed I was when I saw my result. What I had started in 1999 took 20 long years to complete. Yes, 20 long years after which I still finally  earned  the prestigious title of Chartered Accountant.', told Indira. To read her amazing story click here. 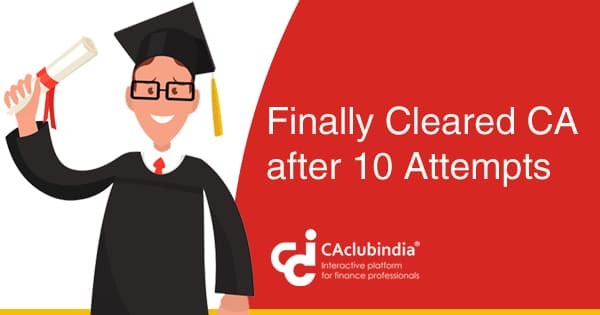 The journey of Sumit was long and not easy but the destination was beautiful. Sumit failed IPCC Group 1 twice and took 4 attempts to clear Group 2. He faced another failure in May 14 when he could not clear single group in CA Finals. But who could stop him? Sumit appeared again in Nov 2014 and cleared Group 1. He missed his group 2 by 20 marks. Sumit was all set to prepare again for his group 2 but destiny had planned something else for him. He lost his father in December 14. 'This was the most disturbing phase of my journey, told Sumit. Emotionally broken Sumit got back up he not only started preparing again but also handled his father's business. But unfortunately he failed in 6 straight attempts. Failure took its toll on him and he decided to give up. Sumit told that he didn't write his papers in May 18. But how could the hustler in Sumit die. Sumit finally gave his final shot in May 19 and yes he made it. It took him 10 complete attempts to become a CA. But today he is living his dream. Read his full story here. 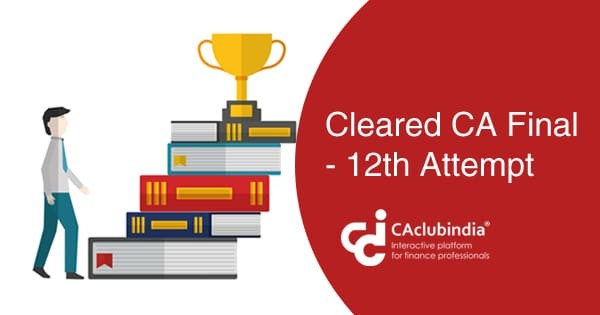 It took Reshma 12 complete attempts to clear CA. She tells that she faced severe criticism from her relatives. People told her unpteenth times that CA was not her cup of tea and she didn't have the capability to clear the exam. She faced criticism from people she considered her friends and family. But it was her husband and her mother who told her to take criticism in a constructive way and keep going. On clearing her exams Reshma wrote this wonderful message for her peers, ' Do not lose hope. Think of your parents and study for them because the happiness that they get when we clear is boundless. My mom started  crying when she heard that I cleared and that moment was the happiest moment in my life. I am happy that I could make my mother and my husband happy.Read this wonderful message from Reshma here. 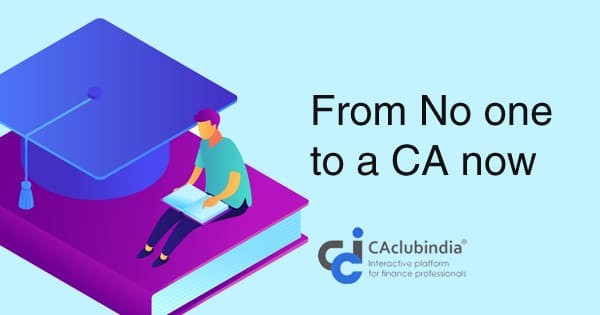 We all make mistakes but successful people are those who learn from them. Vishal failed multiple times. But instead of feeling depressed and stressed after his failure he would try to analyse what went wrong so that he could work upon it in his next attempt. Failure was nothing but an opportunity for him to learn from his mistakes. Vishal learnt from his mistakes. 'Before my every attempt, I did analysis by seeing my performance and past results, where I was lacking behind and what was holding me back from passing the exams.' told Vishal. He started his journey in 2014, took 4 attempts to clear IPCC and gave a couple of attempts in CA Finals. He says. ' Miracle happens when you make it happen.' and he did make his dream turn into a reality. Read Vishal's article here 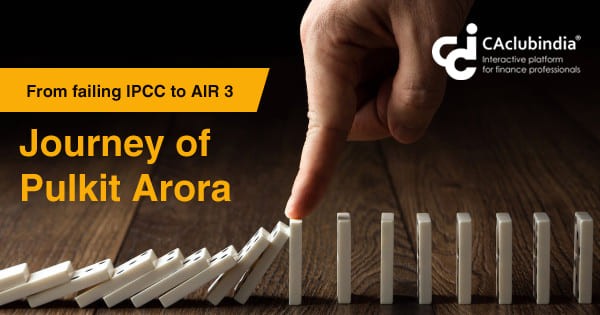 Failure is the biggest motivation you can ever get and who could be a better example than him to bounce back after failure. Pulkit did not clear his IPCC in his first attempt but not only managed to clear his finals in his first attempt but also secure a rank. Pulkit got AIR 3 in November 18. He believes that you will get everything what you want if you are truly passionate about it and give your best to achieve that thing.  'So it is all about the right attitude and more hard work due to which I was able to manage this jump. So yes, any CA journey will be filled with ups and downs but if you are really dedicated, no one can stop you. There is NO SHORTCUT TO SUCCESS. You really have to work hard to achieve the 'CA' Prefix.' said Pulkit. To read more from Pulkit click here.

We hope you all will take some motivation from our heroes who never settled because they knew what they deserve and above all they believed in themselves. If you too have an inspiring story that can touch lives and give them a ray of hope in their times of struggle, please write to us at articles@caclubindia.com and we will share it with the world. :)