In this article, author makes an effort to explain the damage caused to Indian economy, its businesses & common man due to 4 main incorrect decisions taken by RBI.

- Increased contribution by ARCs to acquire NPA of banks

- Illogical norms for restructuring on banks. 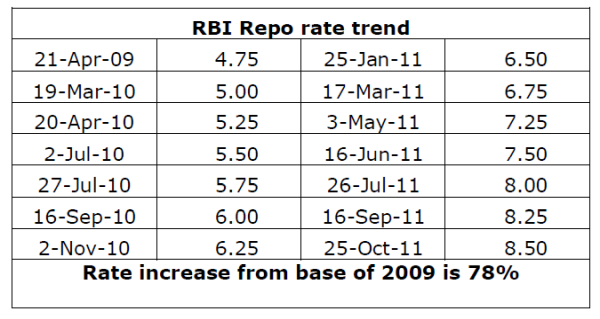 As per theory of demand & supply of money, RBI used tool of monetary policy & the started increasing interest rates to curb overall money supply in economy. It is presumed that increase in repo rates can reduce inflation in economy. However, prices of consumer products have increased by 62% since the base of 2008. Increase in interest rates has not worked in favor of RBI, businesses & consumers/common people. 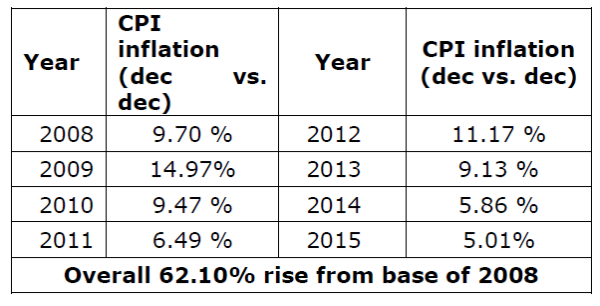 As many as 14 public sector banks have reported stressed assets- non-performing assets (NPAs) and restructured loans of over 13.03 per cent of their advances, the average of weak assets of PSU banks during the period ended December 2014 with Central bank highest at 21.15%. It is understood that banks keep doing ever greening / window dressing of balance sheet & avoid disclosure of NPAs & restructured assets, the reported figures of all banks seem to be far less that actual figures. RBI mandates that banks need to have capital adequacy of 10% which means that total stressed assets of 13% have virtually started eroding depositors money lying with banks.

Increase in interest rates has also led to depreciation in the rupee by 46% thereby increase in the import prices of commodities like oil, gems & jewellery, electronic equipments, machines, engines & pumps, etc. Indian imports have increased by 32% since 2010 thereby leading to further inflation in the company. This depreciation in rupee is inspite of foreign fund inflows of approx. $ 300 Billion in last 8 years.

Due to increased in interest rate, increase in NPA & losses of companies, Sensex should have decreased & share prices should have fallen during this period, however the same has not happened due to very strong foreign inflows in the economy as investors kept investing in Indian market to take benefit of increased interest rates & expectation of returns from profitable investments as other economies were under slump including US & European markets.

For last several years, there is hardly any liquidity with business & SMEs. The cash is not rolling as it used to be pre-2008. The number of greenfield & brownfield projects have reduced considerable in the economy. Debtors position of several companies are more than 6 months old. Due to several scams together within 5 years including mining scam, telecom scam, etc., corruption, slow approvals for last 5-6 years, all this added to the burden. There are lacs & lacs of small, medium & big business have become bankrupt, they had to close down businesses & banks had to auction the asset or sell it to ARCs. ARC acquisition was gaining momentum but RBI intervened & increased ARC contribution from 5% to 15% which again added to the burden. ARC were able to acquire less number of accounts from banks. Banks were stuck by RBI norms & businesses suffered further as banks cannot restructure loans unless the borrower regularizes the overdue position. It is mockery to basic logic that how businessman can make the account regular when he is cash strapped/ in losses. This is another blunder by banks & RBI. In effect, banks cannot restructure account suo-moto & cannot sell to ARCs as ARCs don’t have 15% cash to pay to banks to acquire account.

Bankruptcy of one business impacts hundreds of its creditors who would have been dependent on that business & imagine the ripple effect it would have created in the economy when lacs of businesses including small, medium & big corporates became bankrupt.

For me, RBI is the culprit for loss to the nation for last 6 years & our all educated senior management at top positions have not been able to understand the ground realities & have failed in taking the right decisions. People were happy when renowned Mr. Raghuram Rajan was made RBI Governor & expected him to reverse the incorrect decisions of Subbarao Government. However, it was shock to the nation when he too increased the rates.

It is high time, RBI realizes this & decreases repo rates by 4-5% within 2-3 months to move the industry / give impetus to investors. Incase, RBI does not accept this, I hope they have strong justifications to counter this article.

Incase, home loans will be cheaper by 4% then it will give impetus to real estate sector as well which is presently bleeding with ready unsold inventory of approx. 3.5-4 years.

As RBI mandated banks not to lend to Real Estate Sector, builders are forced to borrow from NBFCs at 16-22%. Infact, real estate is one such sector where NPA ratio is least. Unlike manufacturers/traders who hardly give collateral ranging from 10-35% to banks, real estate developers given 200% security cover to banks and given 1-2% more interest to banks compared to non-real estate customers. However, RBI continues to restrict lending to Real estate sector without any logical reasoning / justification. 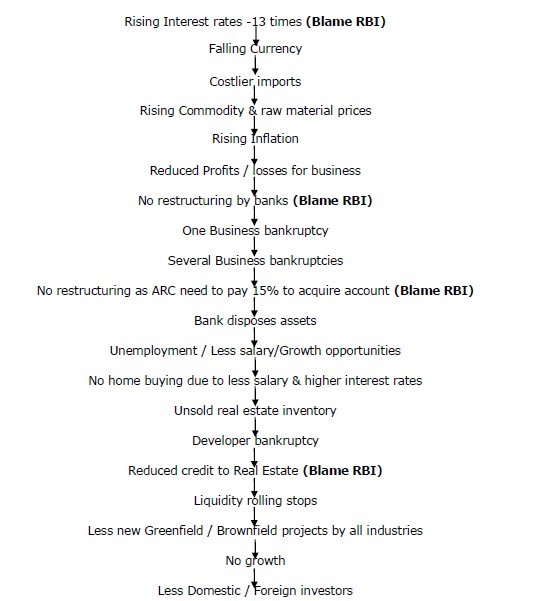 Now that approvals have started coming for all industries & there has been real systemic changes started taking place after the new Government, it will still take 2-3 years that we can see the positive changes in the economy as the mess created by wrong decision making in earlier years will take time weed out. In this scenario, RBI reducing rates by 4% within few months will add sweetener to the deal & help Indian businesses & common man to recover from the stressed financial memories & come back on the growth trajectory. It would be pertinent to mention that requirement of promoter contribution by ARCs for acquisition of accounts should be reduced from 15% to 5% as it was earlier.