Companies Act, 2013 has been published in the official gazette for public information and will become applicable once the Ministry of Coprorate Affairs (MCA) notifies it. Accordingly, MCA has notified 98 sections of the Act on 12th September 2013 for immediate effect. The other sections will become come into effect once MCA issues notification regarding them. MCA has also released the first set of draft rules and their related forms for public comments. So the new Act has already come into effect and it will not be long before the whole Act is notified to replace the Companies Act of 1956. At this juncture it is very important to understand the changes which have been brought about by the Companies Act, 2013 and their implications on various stakeholders. In the current write up we have highlighted the provisions relating to Audit and Auditors under the Companies Act, 2013 as applicable to non-government companies. 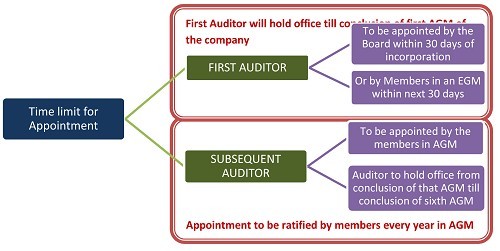 TERM OF APPOINTMENT OF AUDITOR

OPC and Small Company – Same Auditor can be re-appointed every five years.

i. Individual – One term of 5 consecutive years. Can be re-appointed after cooling off period of 5 years

ii. Firm of Auditors – Two terms of 5 consecutive years. Can be re-appointed after cooling off period of 5 years

PROCEDURE FOR APPOINTMENT OF AUDITOR

• In case of companies which have constituted audit committee, audit committee to recommend appointment of auditor to board, in other cases, Board to consider on their own.

• If Board is satisfied with recommendation of audit committee, it shall consider and recommend the same to members in general meeting.

• If Board is not satisfied, it will send back to audit committee for reconsideration along with Board’s reasons.

- Qualifications and experience of the person

- Size and requirements of the company

• On recommendation of Board, members to appoint an individual or firm as auditor for five years subject to ratification by members in every AGM.

• Company to intimate auditor regarding his appointment and also to ROC within 15 days of meeting.

DOCUMENTS TO BE OBTAINED FROM AUDITOR BEFORE APPOINTMENT

• Consent letter to act as auditor

- He or it is eligible for appointment and is not disqualified for appointment under the Act, the Chartered Accountants Act, 1949 and Rules and Regulations made therein.

- The proposed appointment is within the term allowed under the Act.

• Members can provide for following by passing a resolution:

(a) In the audit firm appointed by it, the auditing partner and his team shall be rotated at such intervals as may be resolved by members; or

(b) The audit shall be conducted by more than one auditor.

• Rotation on expiry of term: Same procedure as appointment.

• For the purpose of rotation, the period for which the auditor is holding office prior to the commencement of this act will also be counted in calculating the period of 5 years or 10 years as the case may be.

• Where a company has appointed two or more persons as joint auditors, the company shall follow the rotation of auditors in such a manner that all of the joint auditors do not complete their term in the same year.

LIMIT ON NUMBER OF COMPANIES FOR APPOINTMENT OF AUDITOR

• An individual or partner of an audit firm cannot be appointed as an auditor in more than twenty companies.

• Subject to the maximum tenure of appointment, a retiring auditor can be re-appointed if—

- He is not disqualified for re-appointment;

- A special resolution has not been passed at that meeting appointing some other auditor or providing expressly that he shall not be re-appointed.

• Where at any annual general meeting, no auditor is appointed or re-appointed, the existing auditor shall continue to be the auditor of the company.

REMOVAL OF AUDITOR BEFORE TERM

• Special Resolution to be passed by company for removal of auditor.

• Application to be filed with Central Government in form no. 10.1 within 30 days of passing special resolution.

• The application shall be accompanied by such fees as specified.

• The auditor concerned shall be given a reasonable opportunity of being heard.

• Auditor to file statement in form 10.2 within 30 days of resignation giving reasons and other facts for resignation.

• Statement to be filed with ROC and Company.

APPOINTMENT OF AUDITOR OTHER THAN RETIRING AUDITOR

• Special notice required for appointment of auditor other than retiring auditor except in case where term has got over.

• On receipt of special notice, company to send notice to retiring auditor.

• Retiring auditor can make representation which needs to be circulated to members.

• Where a firm including a limited liability partnership is appointed as an auditor of a company, only the partners who are chartered accountants shall be authorised to act and sign on behalf of the firm.

• The following persons shall not be eligible for appointment as an auditor of a company, namely:

• A body corporate, except LLP.

• An officer or employee of the company;

• A person who himself or his partner is holding security or interest in a company, or any company which is its holding, subsidiary, associate or fellow subsidiary.

• A person whose relative is holding security or interest not exceeding Rs. One Lakh face value in companies as mentioned above.

• A person who himself or his relative or partner is indebted, or has given guarantee for indebtedness of any third party to the company, its subsidiary, holding, fellow subsidiary or associate company in excess of rupees one lakh.

• A person or a firm who, whether directly or indirectly, has “business relationship” with the company, or its subsidiary, or its holding or associate company or fellow subsidiary. “Business relationship” shall construe any transaction entered into for a commercial purpose except those which are in the nature of professional services as permitted to be rendered by an auditor or audit firm under the Act and the Chartered Accountants Act and the rules and the regulations made under such Act.

• A person who is in full time employment elsewhere

• Person who is auditor of more than 20 companies.

• A person who has been convicted by a court of an offence involving fraud and a period of ten years has not elapsed from the date of such conviction.

• Any person whose subsidiary or associate company or any other form of entity, is engaged as on the date of appointment in consulting and specialised services as provided in section 144.

Auditor not to render following services to company, holding company or subsidiary company, directly or indirectly:

(a) accounting and book keeping services;

(c) design and implementation of any financial information system;

(i) any other kind of services as may be prescribed

Companies Act, 2013 has introduced a number of changes relating to audit and auditors. Most of these are welcome measures aimed at better corporate governance and shareholder democracy. The rules relating to this topic have also been published for public comments. Initial hitches at the time of transition from the existing Act to the new Act are expected which hopefully will be settled with passage of time and clarifications brought out by the Ministry. The draft Rules are open to public comments till 8th of October 2013. Readers are encouraged to understand the provisions and post their comments to the Ministry.