Managing Director (MD) means a director who is entrusted with substantial power of management of the affairs of the company. [Sec.2(54)]

One thing to be noted from the definition of MD is substantial power, dictionary meaning of substantial word implies large in amount, value or importance.

The administrative acts of a routine nature such as affixing common seal, draw and endorse any cheque or negotiable instrument, signing share certificates, etc. are excluded from the sphere of substantial powers to be exercised by the MD.

Further, the expression MD shall also include a director occupying the position of a MD, by whatever name called like President, Chief Executive Officer or Chief Operating Officer, etc.

As per the definition of MD, a person has to be a director first before he can be appointed as MD. Therefore, if a company wants to appoint a person as MD who is not a director of the company, he has first to be appointed as an additional director in accordance with the provisions of Sec.161 of the Act.

Further, MD is vested with substantial powers of management, but he need not necessarily have the whole or substantially the whole of the affairs of a company under his management. Therefore, a company have more than one MD. 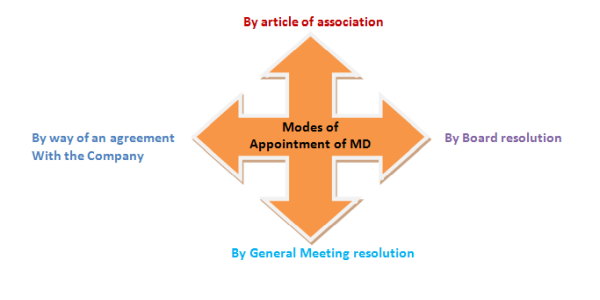 As per Section 196(1) of the Act, the maximum term of appointment of MD, Whole-time director or manager has been fixed at five years at a time, with a proviso that no re-appointment shall be made earlier than one year before the expiry of his term.

No company shall appoint or continue the employment of any person as MD, Whole-time director or manager who -

Provided the appointment of any person who has attained the age of 70 years may be made by passing a special resolution in which case the explanatory statement annexed to the notice for such motion shall indicate the justification for appointing such person;

By reading the above proviso, suppose MD appointed at the age of 68 for five years than at the time of attaining age of 70, some have views that company has to pass special resolution for justifying his appointment, while some are saying opposite. But as discussed and decided in Sridhar Sundararajan v. Ultramarine & Pigments Ltd. and Another, [2016] 131 CLA 203 (Bom.) that at the time of attaining of age of 70, special resolution needs to be taken for justifying his appointment and section 6(c) of the General Clauses Act 1897 will not apply to this issue.

(b) Is an undischarged insolvent or has at any time been adjudged as an insolvent;

The mere fact of suspension of payment to credit is enough to disqualify. No notice of such suspension is further required.

(d) Has at any time been convicted by a court of an offence and sentenced for a period of more than 6 months.

Appointment to be approved at general meeting:

As per Section 196(4) of the Act, the terms and conditions of appointment and remuneration to managerial personnel shall be approved by the Board at a meeting, subject to approval by resolution at the next general meeting and by the Central Government in case such appointment is at variance to the conditions specified in Schedule V.

Where an appointment of MD, Whole-time director or manager is not approved by the Company at a general meeting, any act done by him before such approval shall not be deemed to be invalid. [Sec.196 (5)]

Whole time KMP not to hold office in more than one company:

Managing Director is considered as KMPs as per Section 2(51) of the Act. It has been provided under Section 203(3) of the Act that whole-time key managerial personnel shall not hold office in more than one company at the same time,

1. In the company's subsidiary company,

2. As a director in any other company with the permission of the Board

3. As a MD, if he is the managing director or manager of one and of not more than one other company and such appointment or employment is made or approved by a resolution passed at a meeting of the Board with the consent of all the directors present at the meeting and of which meeting, and of the resolution to be moved thereat, specific notice has been given to all the directors then in India.

Appointment with the approval of the Central Government:

In case the provisions of Schedule V of the Act are not fulfilled by company, an application seeking approval to the appointment of a managing director or manager or whole-time director shall be made to the Central Government or the Company shall have regard to -

Managing Director Remuneration in case of inadequate or no profit

In case of inadequate or no profit, a company may pay to a managerial person without central government approval higher of the following two options (A or B):

If, shareholders passes special resolution this limit will be double. This remuneration should be approved by resolution of Board of director and also by Nomination and Remuneration committee (where it is). The company has not made any default in repayment of its debt or debenture or interest thereon for a continuous period of 30 days in preceding financial year.

In these cases, the company may pay remuneration in excess of amount provided in Sec. II:

a. Where remuneration in excess of these limit is paid by other company, which is within permissible limit under Section 197 and that other company is either a foreign company or has got the approval of its shareholders in general meeting to make such payment.

b. A company within seven year from its incorporation or a sick company within five years from sanction of scheme of revival may pay up to two times the amount permissible under Section II.

c.  resolution plan has been approved by the National Company Law Tribunal under the Insolvency and Bankruptcy Code, 2016 for a period of five years from the date of such approval

d.  An unlisted company in SEZ may pay up to Rs. 240 Lakh yearly

i. An auditor or Company Secretary of the company or company secretary in practice has certifies that:- all secured creditors and term lenders have stated in writing that they have no objection for the appointment of the managerial person as well as the quantum of remuneration and such certificate is filed along with the return as prescribed. &

There is no default on payments to any creditors, and all dues to deposit holders are being settled on time.

A managerial person shall be eligible for:

i. Contribution to provident fund, superannuation fund or annuity fund to the extent these either singly or put together are not taxable under the Income-tax Act.

ii. Gratuity payable at a rate not exceeding half a month's salary for each completed Year of service; and

iii.  Encashment of leave at the end of the tenure

An expatriate managerial person shall be eligible for:

These perquisites shall not be included in the computation of ceiling of Remuneration.

Conclusion: Managing Director can be considered as ‘Lord Krishna' of the Company. Although Company's affairs are conducted through effective Board only but somehow MD is the guiding and managing force of the Company.