Kabaddi between taxpayer and income tax! Enjoy it!


Arjuna (Fictional Character): Krishna, Nowadays interesting matches of Pro-Kabaddi are going on. This is the second year of Pro-Kabaddi Match Series. The game of kabaddi is gaining more and more popularity by the day. Krishna, Please explain how Interesting the game will be if it is played between the Income Tax officers and Taxpayers, such that Knowledge can be gained in a fun loving way.

Krishna (Fictional Character): Arjuna, Kabaddi is one of the finest games in India. It is accepted and played worldwide. Indian Kabaddi Team is one of the best teams all over the world. If Kabaddi is played in Income Tax then there is one team of the Income Tax officers and one of the Taxpayers. Income Tax Laws are like Kabaddi Playground, center line means due dates of various Tax laws and limits of prescribed provisions. This game is played for 40 Minutes. But in Income Tax Act this game is played for one complete Financial Year. In this game instead of saying“Kabaddi-Kabaddi” the Taxpayer’s team will say “Save Tax- Save Tax” and Income Tax Officer’s team will say “Tax-Tax”. In this game, a player from one team will start playing and then players of the opponent team will move up. Likewise in Income Tax, Taxpayer files Return first then Income Tax officer will move up i.e. start processing. Today we will discuss Income Tax in this manner only. 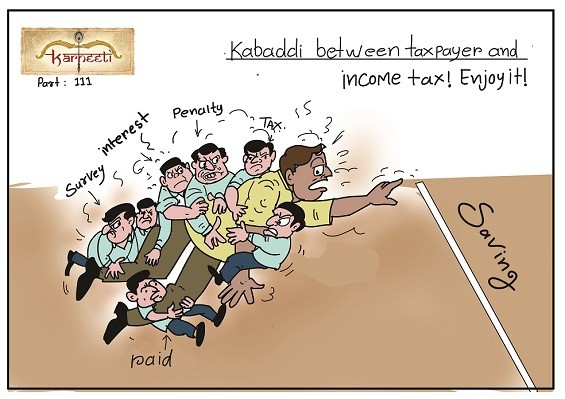 Arjuna: Krishna, What limitations do the Taxpayers need to follow?

Krishna: Arjuna, like “Middle lines” in Kabaddi game, in Income Tax there are due dates for filling of Returns. They are as follows:

1. Due date for filling Income Tax Return is 31st august for Individual Taxpayers who are not required to get their books of Accounts audited. E.g. Salaried Employee, Taxpayers having Turnover less than 1 crore etc.

2. Due date for filling Return of Income is 30th September for those Taxpayers who are required to do Tax Audit ( having turnover more than 1 crore) like Company Assesses, LLP Assesses etc.

3. Due date for filling Return of Income is 30th November for those Taxpayers to whom provisions of Transfer Pricing are applicable.

5. Taxpayer should verify form 26AS before filling return of Income.

In the game of Kabaddi the middle line is to be touched by the raider while he is approaching from opponent team’s side of the ground. The player may be declared out if the middle line is not touched by him. Like in Income Tax Act, Taxpayer has to file returns before Due Dates otherwise Taxpayer may be required to pay Interest and Penalty according to Sec234A of Income Tax Act. If Return is not filed then there is no way-out for the Taxpayer Player.

Arjuna: Krishna, What is the strategy of the Income Tax officer while attacking the opponent?

Krishna: Arjuna, In the game of Kabaddi while attacking Player is more focused on how he can grab more and more players of opposite team, like wise in Income Tax Act, Income Tax officer are more focused on how they can collect more and more tax from the Taxpayers. The Raider from the team of the Income Tax officers are very smart and sharp. They scrutinize the Returns filed by the Taxpayers. Also they can declare the player out by making enquiry for previous 6 Years. They have the power of making the Taxpayer Player all out by doing Survey or Raid etc. it means while making their raid they don’t leave a single point or person. And while defending they don’t give much time to respond.

Arjuna: Krishna, What rules does the Taxpayers need to follow?

Krishna: Arjuna, Many rules are required to be followed while playing the game of Kabaddi. Likewise the Taxpayer is required to make certain Transactions in the prescribed limit of law. Following are some of those provisions:

1. Taxpayer should not make payment in cash for an amount exceeding Rs.20, 000.

2. TDS is to be deducted on applicable transactions and it should be paid to the Government.

3. Transactions in Loan, Deposits, and in Immovable Property should not be done in cash for an amount exceeding Rs.20, 000.

5. All Taxes are required to be deposited to the Government before filling return of Income.

Arjuna: Krishna, What should be the opponent team’s move in response to this?

Krishna: Arjuna, If the Taxpayer has not followed these provisions then he will have lose his points I.e. he will have to pay for it. If he has made any transaction in cash for amount exceeding Rs.20, 000 then said expenditure is disallowed. If TDS is not deducted then deduction of 30% of 100% expenditure is not allowed. 100% Penalty will be levied if transaction in Loan, Deposits, and Immovable Property is done in cash for an amount exceeding Rs.20, 000, If Investment u/s 80C exceeds Rs 1, 50,000 then no deduction is allowed for such amount. If Differences have occurred in the Income as shown in form 26AS and in Return filed then Tax, Interest, Penalty is required to be paid. Income Tax officer may levy 100 to 300% penalty on conceived Income.

Arjuna: Krishna, what should one learn from this game of Kabaddi and Income Tax?

Krishna: Arjuna, Human Life is like a Kabaddi Game. There can be both Success as well as failure in life. But one should not cross their limits. Taxpayer always plays for saving Taxes, whereas Income Tax officer plays for Tax Collection. If Dispute arises between them then there is an option of Appeal. Due to Computerization Income Tax Department collects more and more information from other departments. So Taxpayer may get trapped from all the sides. Taxpayers have no options. The Game has to be played according to the law. Pro-kabaddi means professional kabaddi, thus now professionalism shall increase in the tax department where service to taxpayer shall be the motto. Tax is collected for the development of the Nation. Therefore whoever it may be, either the Taxpayer or the Income Tax officer it should be taken in the right spirit.