Internal Audit as per Section 138 of the Companies Act 2013


Internal Audit is a Compliance test that has been mandated by Section 138 of the Companies Act, 2013 upon the Companies which come under the purview of prescribed thresholds.

The said companies have to perform the internal audit checks regularly to ensure that they are not deviating from any material compliance instructed by any regulatory or governing body. The said companies are required to appoint a person as an Internal Auditor. Section 138 describes that a Chartered Accountant, a Cost Accountant, or any other professional as may be decided by the Board can be appointed as an Internal Auditor. Thus we can see that the Companies Act has widened the scope of professionals in this segment. So with the Companies Act 2013, professionals such as Chartered Accountants, Cost Accountants, Company Secretaries, Advocates and the like can be appointed as Internal Auditors. Thus it is a segment where such professionals can secure a lucrative career.

The internal audit is done by checking whether the company has complied with all the applicable laws and thereafter a report is prepared by the Internal Auditor stating the compliances and material deviations if any.

List of Sections referred in this Article which should be kept in mind while dealing with the internal audit as per Companies Act, 2013:-

Who can perform Internal Audit under Section 138 of Companies Act 2013?

• Section 138 provides that the Companies are required to appoint a person as an internal auditor who needs to be a professional. The said person can be a chartered accountant or a cost accountant, or such other professional as may be decided by the Board.

• The term professionals is a wider term which facilitates other professionals such as Company Secretaries or Lawyers to be appointed as internal auditors and to ensure timely compliance checks on a company.

• There is no said format or procedure prescribed by the Act to conduct an Internal Audit or to prepare a report thereof. Therefore companies have the privilege to conduct the Audit as per their size and requirements.

• The report so prepared should mention the compliances and the deviations found if any and the method to rectify the errors so found. The process should be given due weightage as it analyses the state of affairs of the Company and should be conducted fairly and transparently.

Applicability: Is Internal Audit Mandatory for every company? 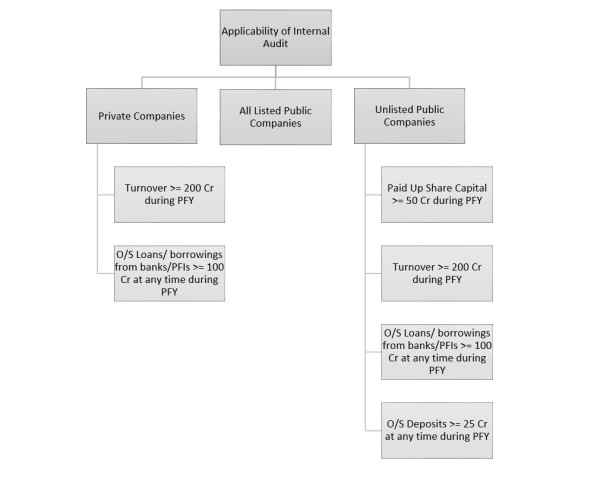 Rule 13 of Companies (Accounts) Rules, 2014 outlines the applicability of Internal Audit upon a class of Companies.

The following class of Companies shall be required to appoint an internal auditor or a firm of Internal Auditor, namely:-

a. Every Listed Company- Applies to all Companies without any specific criteria or threshold.
b. Unlisted Public Company:-

**Learning Rule-TLPD (divide every level into half)**

**Learning Rule-TL (divide every level into half)**

Provided that an existing company covered under any of the above criteria shall comply with the requirements of Section 138 and this rule within 6 months of commencement of such section.

Can an internal auditor be an employee of the company?

i. The internal auditor may or may not be the employee of the Company;

ii. The term ‘chartered accountant’ shall mean a Chartered Accountant whether engaged in the practice or not.

What criteria/ scope of work of Internal Auditor have been defined by the Act?

The Audit Committee of the Company or the Board shall, in connection with the Internal Auditor, formulate the scope, functioning, periodicity, and methodology for conducting the internal audit.

Therefore the Act has given the power to the Board/the Audit committee to define the scope of work of the Internal Auditor. The act does not prescribe any specific time frame for conducting an internal audit but it is considered a good practice to conduct the audit quarterly so that the compliances are monitored properly and there are no frauds or deviations in the Company.

RULE 8 OF THE COMPANIES (MEETING OF THE BOARD AND ITS POWER), RULES 2014

Section 117 of the Companies Act, 2013 requires certain resolutions to be filed with the concerned Registrar of Companies within 30 days from the passing of the said resolution. Section 117 links to section 179 which is the parent section Rule 8 of the Companies (Meeting if the Board and its Power), Rules 2014 wherein sub-rule 4 states “to appoint internal auditors or secretarial auditor.”

Hence it could be very well interpreted that whenever an internal auditor is appointed in a company then the resolution should be filed with the concerned Registrar of Companies in Form MGT-14 within 30 days from the date of passing of the said resolution.

The Chairman explained the Board about the applicability of Section 138 of the Companies Act, 2013 read with Rule 13 of the Companies (Accounts) Rules, 2014 on the Company. The Chairman suggested the name that the Company should appoint Mr. __________ as Internal Auditor for the financial year _____. The Board after due discussion passed the following resolution with unanimous consent:

“RESOLVED FURTHER THAT the draft copy of engagement letter for the appointment of Mr____ as Internal Auditor for the Financial Year ____ as placed before the Board be and is hereby approved and the Chairman initialled the same for identification.”

“RESOLVED FURTHER THAT Mr. _______ (DIN:____), Director of the Company be and is hereby authorized on behalf of the Company to do all such acts, deeds, matters, things as are considered necessary and expedient to give effect to this resolution including the filing of necessary forms with the office of concerned Registrar of Companies.”

Why do companies do Internal Audit?

Conclusion: Internal Audit should not be looked upon as a Compliance burden but as a basic necessity for the healthy growth of the Company. Many times it has been observed that the companies lay back on the preparation of Internal Audit reports as it is not compulsory to be filed under any Section of the governing acts, but the Compliance Officer or the person so appointed as the Internal Auditor should ensure and explain to the other heads the importance of Internal Audit and should maintain the Yearly/Quarterly based internal audit reports in a proper manner.

The Chartered Accountants, Cost Accountants, Company Secretaries, Lawyers, etc. should definitely try to explore opportunities in this segment as they are considered to have the expert knowledge of the Companies Act, Income-tax Act, other Taxation Laws and other allied Laws which is a prerequisite while conducting an Internal Audit.

Also read: Checklist of a few of the methods that need to be adhered to while conducting an Internal Audit