Gold and its new relatives 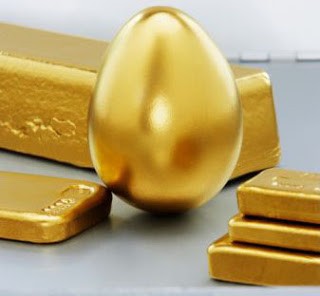 Three thousand year old traditional color of hoarding stores of wealth that are physical, portable and easily devisable are hard to break. This report is not a speculative figure or number guessing. It brings you the fundamental reasons behind the futuristic growth.

Very Soon the Gold prices will see demand and price increase as the famous festival of Arab countries Haj is about to begine. Muhammad Azouz, member of the National Committee for Gold at the Saudi Council of Chambers of Commerce, said the gold jewelry markets flourish in the Kingdom during Haj. He said the majority of customers are pilgrims from Asia and Africa. He said local gold merchants have a reputation for good quality products. Abdullah Al-Amri, manager at a jewelry shop in Jeddah, said the demand for gold increases during Haj. Despite of the higher prices gold will see huge sales in this festival. One should not consider that higher prices of gold will make an effect on this festival. Since Araba countries have more surplus and more buying capacity as compared to any other economies at the present times of world economy. Gold will have rate of sales despite of higher prices.

According to the World Gold Council, annual mine production of gold over the last few years has been close to 2,500 tonnes. About 2,000 tonnes goes into jewellery or industrial/dental production, and around 500 tonnes goes to retail investors and exchange traded gold funds.

The ten years Washington Agreement on Gold (WAG), which dates from September 1999, limited gold sales by its members (Europe, United States, Japan, Australia, Bank for International Settlements and the International Monetary Fund) to less than 500 tonnes a year. In 2009, this agreement was extended for a further five years, but with a smaller annual sales limit of 400 tonnes. This have also further increased the appetite of buying Gold by these nations followed with more focus towards Gold accumulation. European central banks, such as the Bank of England and Swiss National Bank, were key sellers of gold over this period.

According to the very recent report from Goldman depict the picture of underline principles of the rising gold demand and its price. The Goldman Report, authored by Damien Courvalin and David Greely said that With the US real interest rates pushing lower off the slowdown in the pace of the US economic recovery and the growing prospect of another round of quantitative easing, we expect gold prices to continue to climb.”

The report added that, “Despite the rebound in net speculative length, it remains well below levels consistent with the current low US real interest rate environment.” The decline is bound to persist with rates even going lower over the near-term once the Fed undertakes QE measures. As a result, Goldman raised its gold price forecast to $1,400 in three months, $1,525 in six months, and $1,650 in 12 months.

As the emerging economies are having a higher savings rate and global imbalances are exerting pressure on the currency, the demand for gold will rise constantly. According to the Reuters Global Banking Summit Report gold is being used as an income and alternative savings instruments. This means the paper currency is replaced by Gold. The cost of gold mining has also increased in the last couple of years. Russia Australia South Africa is facing steep increases of cost in gold mining.

Cooling demand of real estate sector of China and other high yielding investments sectors in China will spook up the demand of gold in the coming months. Moreover the more tight belts are being developed the more demand of gold will rise. The People's Bank of China said in August it would let its banks export and import more gold in a program to drive the development of the country's market in the precious metal. China is having a savings rate of 40% and hence its promotes among its citizens to save under gold. China is doing massive advertisements through TV, Radio, SMs and other communication means to invest and convert the savings into Gold. Inflation is another blessing for the gold price. Uncertainty among investors forces them to turn to Gold as a hedge against unforeseen disasters. Whether it’s a recession or inflation Gold will act as the only way to survive any crisis among all situations.

In 2007, Mumbai-based Benchmark Mutual Fund became the first financial institution to offer a gold ETF . Since then, gold-based ETFs have drawn more and more Indian investors away from equity mutual funds. We have found in the recent figures that Equity Mutual funds schemes are reflecting outflow of cash. That outflow is the inflow in ETF made of gold. In India more raw gold prices and jewelry prices will increase the demand for gold ETF will increase taking this as an alternative investments avenue within the range of Indian pockets.Over here alos we find diversification of investments class among the investors. Volume of Indian gold ETF have jumped like a galloping horse in the month of October. Exchange traded funds doubled in October near to 13.999 tonne on year.

Very soon the demand for gold ETF will arise from new nations. Among them the recent one will come from Sri Lanka. Sri Lanka has hammered out a regulatory framework for exchange traded funds (ETFs), a pooled investment scheme, which will also allow precious metals to be traded on the Colombo Stock Exchange from next year.

According to the World Gold Council report on India:

• India's gold import, which had already exceeded 2009 levels, is likely to cross the 750-tonne mark this year due to increasing consumer demand for jewellery despite soaring prices.

• Gold jewellery demand in India in the July-September quarter surged 36% to 184.5 tonnes from 135.2 tonnes in the corresponding period last year

• The total gold demand rose 79% to 650.4 tonnes in the January-September period compared to 363 tonnes in the same period in 2009, indicating a robust demand.

According to the Global Gold demand position:

• The global demand for jewellery rose 8% in Q3, with four of the best performing markets -- India, China, Russia and Turkey -- accounting for 63 per cent of the demand. Retail investment went up by 25% to 243 tonnes during Q3 this year, the report said.

• The global industrial demand for gold registered a 13% growth in the third quarter at 110.2 tonnes, driven by improving demand for consumer electronic goods, WGC said.

• The total industrial demand rose 19% to 320 tonnes for the nine-month period (Jan-Sep) against 270 tonnes in the same period last year.

• At the same time the total Electronic Traded Fund (ETF) fell 7% to 39 tonnes in the third quarter compared to 41 tonnes in the same quarter in 2009.

Well clear that how the global gold and Indian gold market is taking a paradigm shift towards investments attitude.

The QE2 will exert more pressure on the worlds most safest instruments of investment The Bond. Bonds will remain under pressure followed with low yields and higher prices. Gold is the left out instruments which will soar due to more printing of money under the QE2.The US balance of payments will exert pressure on the US economy resulting more gold price hikes. The below chart will show the trade imbalances of US and the climbing prices of GOLD. Dollar will remain under pressure forcing other nations to convert their assets and savings into gold. 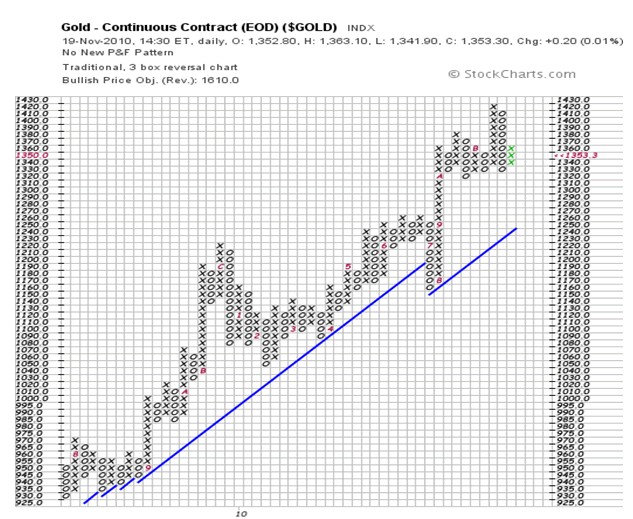 In other words QE1 spooked the global equity market back to the era of pre recession phase leaving no space for further investments in these equity market conditions. The first round of massive quantitative easing, valued at more than US $2 trillion took the Dow from a low of 6,469 all the way back up to significant resistance at 10,729.When QE1 came to an end the QE2 have been deployed.

The major difference between QE1 and QE2 is that the first one spooked the equity market valuations leaving no space currently for the equity markets to have a safe upward rally and QE2 came when all asset classes are being forced to cool of due to inflation worries..Finally the blessing goes to gold now. As inflation will happen in merging economies more gold will be deployed to hedge inflation.

As gold will become a scare resource in the coming year’s silver and platinum will see new decade of growth. Silver and Platinum and basket of ETF will be the next phase of tremendous growth. Very recently first ever precious metals basket ETF which consist of Gold, Silver, palladium and platinum, launched allowing investors to have ownership of each share equal to about 0.03 troy ounces of gold, 1.1 ounces of silver, 0.006 ounces of palladium, and 0.004 ounces of platinum.

A part of this type will flourish the Indian market too. We already find huge growth of these financial products in US and other economies. Silver, palladium and platinum are used in a wide range of industrial applications and hence the demand is increasing more than the Gold .Very soon gold will be replaced if not then more diversification of assets will happen in these new upcoming products.

Gold will shine and before it loses its shine new products will come where again we have to look for diversification. Investors should invest in gold keeping the futuristic demand of gold and should invest for long and not taking a call for a short term price hike. ETF should be a part of your portfolio but not more than 10-15% of your portfolio size. Physical gold should also be part to that extent. Finally every call should be a long term since global uncertainties are hard to dig. Nobody knows when a financial time bomb will burst taking the entire market in to the deep ocean of collapse.So invest in gold with a,ongterm mindset.Remember commodities have a never ending stopage of demand.