In today’s electronic age where almost everything has become virtual why should our voting rights be confined to physical means? Recognising the need to bring in the advantages of technology to the voting system, Companies Act, 2013 for the first time mandates e-voting facility to be provided by all listed companies and other unlisted public companies having more than 1000 shareholders. The listing agreement also contains stipulation with respect to e-voting for general meetings as well as postal ballot. In this article, an effort has been made to give a detailed analysis on the concept of e-voting mandated by the Companies Act, 2013 read with Companies (Management and Administration Rules), 2014 and the listing agreement.

[Rule 20 of companies (Management and Administration Rules), 2014] ‘‘voting by electronic means’’ or ‘‘electronic voting system’’ means a ‘secured system’ based process of display of electronic ballots, recording of votes of the members and the number of votes polled in favour or against, such that the entire voting exercised by way of electronic means gets registered and counted in an electronic registry in a centralized server with adequate ‘cyber security’;

When and for whom e-voting is mandatory?

As per Rule 20 of Companies (Management and Administration Rules), 2014, e-voting is mandatory in case of all general meetings of every listed company and a company having not less than 1000 shareholders. The Ministry, however, vide its General Circular No. 20/2014 dated 17.06.2014 has decided not to treat these provisions as mandatory till 31st December, 2OI4.

With respect to Postal Ballot, Companies Act, 2013 lay down that postal ballot means voting by post or through any electronic mode [Section 2(65) and Rule 22 of Companies (Management and Administration Rules), 2014.

Coming to listing agreement, as per amended clause 35B of listing agreement (amended vide SEBI Circular No. CFD/POLICY CELL/2/2014, DATED 17-4- 2014), e-voting is mandatory in respect of all shareholders' resolutions, to be passed at General Meetings or through postal ballot. This means that e-voting facility needs to be necessarily provided both in case of convening a general meeting physically as well as resolutions being passed through postal ballot process. Further, SEBI has clarified that inspite of deferment made by the MCA, for listed companies SEBI provisions will prevail which means that e-voting will remain mandatory for listed companies.

In nutshell, the mandatory applicability is as follows:

Company needs to provide facility of e-voting for all kinds of member’s resolution, be it through a General Meeting or through postal ballot.

For unlisted public companies, the applicability depends on the number of shareholders. For companies having less than 1000 shareholders, e-voting facility is not required to be mandatorily provided both in case of postal ballot as well as for General Meetings.

For unlisted public companies having 1000 shareholders or more, e-voting facility is required to be mandatorily provided in case of General Meeting on or after 01.01.2015.

For private companies e-voting is not mandatory. 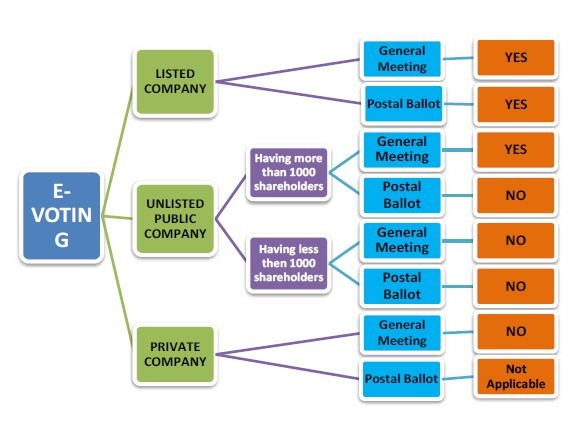 Apart from the above, companies can also voluntarily provide e-voting facility in which case they must also follow the procedure given below and all the provisions of the Act and Rules relating to e-voting will be applicable.

What are requirements and procedure to be followed for providing e-voting facility at general meetings?

1. Appointment of scrutinizer to scrutinize the e-voting process

• Board has to appoint a scrutinizer after ascertaining his/her availability and willingness to be appointed as scrutinizer to scrutinize the e-voting process.

• Any Company Secretary, Chartered Accountant, Cost Accountant, in practice, or an advocate not in employment of company can be appointed as a scrutinizer.

2. Finalisation of notice of general meetings

• Notice can be sent only through registered post, speed post, courier or through electronic means at the registered email Id.

• Notice has to be placed on the website of the company and of the agency which is providing the e-voting platform, immediately after it is sent to the members.

• The notice of the meeting shall clearly mention that the business(es) may be voted by shareholders through electronic voting system and the company is providing facility for voting by electronic means.

Company has to publish a newspaper advertisement, one in a vernacular language and one in English Language about having sent the notice of the meeting and among other things, the advertisement should also contain the following details:

o statement that the business may be transacted by electronic voting;

o the date of completion of sending of notices;

o the date and time of commencement of voting through electronic means;

o the date and time of end of voting through electronic means;

o the statement that voting shall not be allowed beyond the said date and time;

o website address of the company and agency, if any, where notice of the meeting is displayed; and

4. Period for which e-voting has to remain open

• E-voting shall remain open for a minimum of 1 day and maximum of 3 days.

• E-voting has to be closed at least 3 days before the day of the meeting.

• All the shareholders, whether holding shares in physical mode or Demat mode can cast their votes electronically during the period in which voting remains open.

5. Procedure on closure of e-voting period

• On closing of the voting period, the e-voting portal should be blocked forthwith.

• Scrutinizer shall unblock the portal within 3 working days in presence of atleast 2 witnesses who are not in employment of the company.

• Scrutinizer has to make a report regarding the votes cast in favour and those cast against and submit the same to the Chairman, forthwith.

• Scrutinizer has to maintain a register containing complete details of shareholders and the votes cast in the manner prescribed and the same shall remain in the safe custody of the scrutinizer until the chairman considers, approves and signs the minutes and thereafter, the scrutinizer shall return the register and other related papers to the company.

• Subject to receipt of sufficient votes, the resolution shall be deemed to be passed on the date of the relevant general meeting of members.

PROVISIONS RELATING TO VOTING BY POLL

On whose request/demand poll will be taken?

• On Chairman’s own motion, or

• In case of company having share capital, on a demand raised by members present either in person or proxy, where allowed, and having not less than 1/10th of the total voting power or holding shares on which an aggregate sum of not less than Rs. 5 Lakhs or such higher amount as may be prescribed has been paid-up; and

The demand for a poll may be withdrawn at any time by the persons who made the demand.

When can poll be demanded?

• Poll can be demanded at any time before or on the declaration of result of voting by show of hands.

Within what time poll has to be taken?

• A poll demanded on any question other than adjournment of the meeting or appointment of Chairman shall be taken at such time, not being later than 48 hours from the time when the demand was made, as the Chairman of the meeting may direct.

• The Scrutinizers shall count the votes cast on poll, prepare a report thereon addressed to the Chairman and submit the same to the chairman who shall countersign the same.

• The Chairman shall declare the result of Voting on poll.

As per Section 2(65) - “postal ballot” means voting by post or through any electronic mode.

Which items of business need to be mandatorily transacted through postal ballot?

Except a One Person Company and other companies having upto 200 members, all other companies shall transact the following items of business only by means of voting through a postal ballot -

(b) alteration of articles of association in relation to insertion or removal of provisions which, under sub-section (68) of section 2, are required to be included in the articles of a company in order to constitute it a private company;

(c) change in place of registered office outside the local limits of any city, town or village as specified in sub-section (5) of section 12;

(d) change in objects for which a company has raised money from public through prospectus and still has any unutilized amount out of the money so raised under subsection (8) of section 13;

(e) issue of shares with differential rights as to voting or dividend or otherwise under subclause (ii) of clause (a) of section 43;

(f) variation in the rights attached to a class of shares or debentures or other securities as specified under section 48;

(h) election of a director under section 151 of the Act;

(i) sale of the whole or substantially the whole of an undertaking of a company as specified under sub-clause (a) of sub-section (1) of section 180;

Which items of business cannot be transacted through postal ballot?

• All items of business which are deemed as Ordinary Business at an Annual General Meeting, i.e.

(i) the consideration of financial statements and the reports of the Board of Directors and auditors;

(ii) the declaration of any dividend;

(iii) the appointment of directors in place of those retiring;

(iv) the appointment of, and the fixing of the remuneration of, the auditors;

• Any business in respect of which directors or auditors have a right to be heard at any meeting, like removal of a director or auditor etc.

What is the Process and requirements relating to e-voting in case of Postal Ballot?

“whether in view of the provisions of Section 110 of the Companies Act, 2013 (“the 2013 Act”) and SEBI Circular dated 21st May 2013, a resolution for approval of a Scheme of Amalgamation can be passed by a majority of the equity shareholders casting their votes by postal ballot, which includes voting by electronic means, in complete substitution of an actual meeting?” …..no meeting is required and that the shareholder must cast his vote only on the basis of the information that has been send to him by post or email seems to me to be completely contrary to the legislative intent and spirit to the express terms of the SEBI circular and amended Listing Agreement’s Clauses 35B and 49.

The result of this discussion is:

• The effect, interpretation and implication of the provisions of the Companies Act, 2013 and the relevant SEBI circulars and notifications, to the extent that they mandate a compulsory or even optional conduct of certain items of business by postal ballot (which includes electronic voting) to the exclusion of an actual meeting are matters that require a fuller consideration. The Central Government, through the Additional Solicitor General, and SEBI will both need to be heard. The Company Registrar shall send an authenticated copy of this order to both the learned Additional Solicitor General and to SEBI requesting them to appear before the Court when this matter is next taken up for a consideration of this issue. On a prima-facie view that the elimination of all shareholder participation at an actual meeting is anathema to some of the most vital of shareholders’ rights, it is strongly recommended that till this issue is fully heard and decided, no authority or any company should insist upon such a postal-ballot-only meeting to the exclusion of an actual meeting.

Electronic voting as a facility per se has many advantages in its fold. It offers the shareholders, a chance to participate in corporate decisions, by exercising their voting power from any remote location at their convenient time without having to go through the hassles of travelling to the venue of the meeting. It aims at wider investor participation, greater shareholder democracy and a more robust governance mechanism though it has its own inherent limitations.