Tax credit in any value added taxation is the second most important aspect after the levy as it goes to reduce the basic cost. If credits are not available fully, it adds to the cost of the product or service resulting in cascading effect of taxes. It becomes imperative for assessee to ascertain the credit availability and to ensure that it is disclosed properly in the return. It has been seen that large numbers of errors are committed related to availment, utilisation of disclosure of the credit in the return. The paper writer has made an attempt to discuss various aspects related to cenvat credit to ensure that neither any benefit in the form of credit is missed out nor ineligible credits are taken resulting in initiation of proceeding by department. Considering the importance of topic, it has been divided in three parts for ease of understanding.

In this article, we have covered important practical aspects along with the manner of disclosure in the return relating to “Availment of Credit”. Other two areas would be covered in the next two series.

Every assessee registered under service tax law is required to file service tax return. The return is segregated in different parts for disclosing value of services provided, tax paid, challan details and cenvat credit details. Relevant portion of return where details of credit is to be disclosed is Part I and Part J. Discussion is made for the part relevant to availment of credit along with possible value addition: (Part indicate section of the return)

Part I3.1.1:  Opening balance of credit: This should match with the closing balance of last return. Ideally there should not be any difference between this balance and balance as per books of account, yet if there is any, there should be proper reconciliation. The impact of difference could be given in the availment/utilisation of credit columns of current period. But it should never be adjusted from the opening balance.

Part I3.1.2: Credit availed: This should be disclosed monthwise/ quarterwise separately for input, input service and capital goods. Following should be taken care of while availing the credits

b. The definition is linked with excise tariff heading. Always examine tariff heading on the invoice to see if it is covered under Capital Goods definition of CCR. Chapter heading restriction not applicable in case of component, spares and accessories of capital goods.

c. Purchase should always be made from manufacturer so that excise duty charged can be examined for taking credit. If not manufacturer, then from excise registered dealer. If purchased from VAT dealer, the excise duty would be embedded in the cost of product and service provider will not be eligible to take the credit on it.

d. If eligible, credit should be availed 50% in the year of purchase and balance in subsequent year. No necessity of being put to use for availing the credit.

e. If service tax is paid on erection/commissioning/installation of capital goods, credit can be taken fully in first year itself. (not 50%-50%)

f. Credit can be taken fully even if capital goods partly used for providing taxable service and partly for exempted service. Proportionate credit reversal is not applicable for capital goods.

g. Where availment of credit on capital goods is restricted under any exemption notification, credit should not be availed at all. E.g. a person providing GTA service and supply of tangible goods service, no credit should be taken on vehicles purchased which is used for providing both the services if service tax paid on GTA service on 30% value. (Cenvat Credit Rule provide for taking full credit even if partly used for taxable service and partly for exempted service. But when some specific condition imposed in some other notification, those restriction prevail over Cenvat Credit Rules)

h. Capital goods which fall under specified chapter heading but used exclusively for providing exempted service, credit should not be taken.

i. In case of import of Capital goods, CVD can be taken as credit. SAD credit not allowed to service providers.

I3.1.2.3 Input Service: This is the area of major concern where chances of making error is very high. The concept of credit has been diluted by government over the period by making frequent amendments to indirectly augument the revenue. Following could be areas where one need to pay special attention while filing the return:

All expenditure where service tax is paid may not necessarily qualify for input service. This needs to be ascertained based on following diagram: 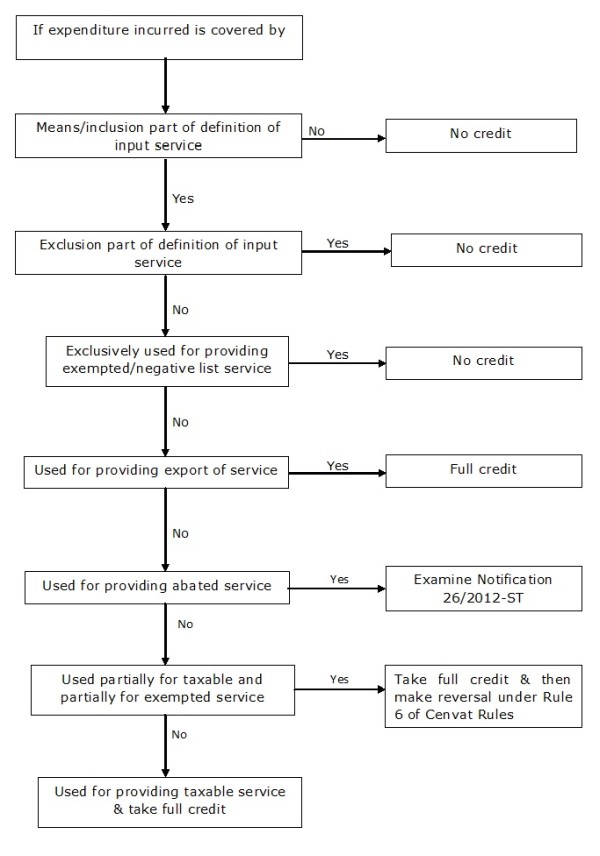 Based on above eligibility, credit need to be taken and shown in the column.

Credit can be taken based on the invoice of vendor even though no payment made to him. If not paid within three months, required to reverse the credit. This may be availed again on payment basis.

a. Set up of office or premise of service provider: credit not allowed

c. Works contract other than for civil work or foundation of capital goods: credit allowed

e. Rent a cab: not allowed

f. Mobile: Allowed if in the company name. Certain portion say 10% could be dispensed with attributing to personal consumption

g. Credit to be taken within one year from the date of invoice. For return filing in October 2015, may be taken beginning from April 2014 onwards if missed out earlier. (This can be done by showing credit of invoice received in April 2014 in the month of April 2015 and so on)

h. Services used for export of services to be disclosed in the return under availment column to claim the refund.

I3.1.2.1 Input: Excise duty paid can be taken as credit subject to definition of input as provided under Cenvat Credit Rules, 2004. The decision whether credit is eligible or not will be guided by same principle as discussed above for input service. Following should be other areas of consideration:

a. Credit on input should be shown separately of input service and capital goods.

b. Credit on input can be taken after delivery of goods to service provider not before that even if invoice is received. The date of receipt/delivery could be ascertained based GRN.

c. All other provision for availment of credit on input shall be more or less the same as discussed above for input service.

I3.1.2.5: Inter unit transfer by LTU: Credit taken by one unit based on the transfer made by other unit of LTU (Large Taxpayer Unit) is required to be disclosed here.

I3.1.2.6: Any other credit taken: Under this column, credit of any other nature taken is required to be disclosed. Following could be nature of disclosure under this column:

a. Credit availed calculated based on actual turnover (to be discussed in the next article) under Rule 6 of Cenvat Credit Rules, 2004

b. Credit wrongly reversed or reversed under protest earlier, now taken back

c. Credit availed on the merger of one unit with another

d. Any other if not specifically covered under any of the earlier options

There could be many other aspects relevant in filing of return. It is expected that these guiding principle would certainly assist in making proper decision for taking credit and filing of return. For any query/feedback, reach the paper writer at ashish@hiregange.com

Author is practicing chartered accountant in the field of Indirect Taxation and heading NCR- Gurgaon branch of Hiregange & Associates.