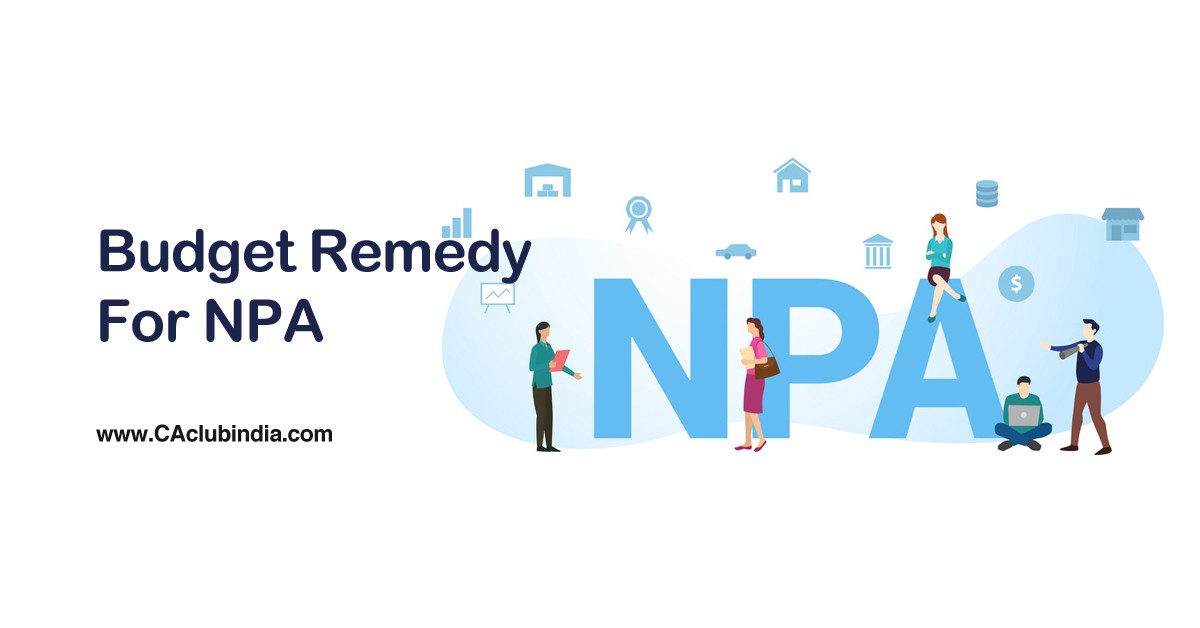 The pertinent question is why such an idea which was earlier thought of and abandoned unceremoniously being introduced now? RBI issued a warning in its Financial Stability Reportthat gross non-performing assets (NPAs) on bank balance sheets could rise from 7.5 percent in September 2020 to 13.5 percent in September 2021 in the baseline scenario.In a medium stress scenario, RBI projects that Gross NPAs of all banks may rise from 7.5 percent as of September 2020 to 14.1 percent by September 2021. If the macroeconomic environment worsens even more, then gross NPAs of banks may rise to at least a two-decade high of 14.8 percent by September 2021 under the severe stress scenario.

The idea of starting an ARC should be viewed in the backdrop of the result achieved so far based on the banking reforms initiated in 1990 and subsequent various measures undertaken. Finding that the measures initially taken for the recovery of debts due to banks and financial institutions did not yield the desired results and significant portion of their funds wereblocked in unproductive assets whose values were deteriorating with the passage of time and based on the recommendations of the Narasimhan Committee report, the Recovery of Debts Due to Banks and Financial Institutions Act, 1993 was enacted and Debts Recovery Tribunals (DRTs) and Debts Recovery Appellate Tribunals (DRATs) were established.In the wake of introduction of Insolvency and Bankruptcy Code in the year 2016, the Act stands amended as The Recovery of Debts and Bankruptcy Act, 1993(51 of 1993). As per the said Act the entire process of recovery of debt was mandated to be over within a period of 18 months. (Sub section 24 of Section 19 of the Act).Did the enactment ofThe Recovery of Debts and Bankruptcy Act, 1993 (RDB) Act meet its objectives?

Since long there was no single law in India to deal with insolvency and bankruptcy provisions and they were dealt with under SickIndustrial Companies (Special Provisions) Act, 1985 (since repealed in 2016), The Recovery of Debts and Bankruptcy Act 1993 (RDB Act), The Securitisation and Reconstruction of Financial Assets and Enforcement of Security Interest Act, 2002 (SARFAESI Act) and Companies Act, 2013 which were not effective and efficacious. Hence, it was considered to be inadequate and to have an effective and adequate frame work for insolvency and bankruptcy, the Central Government enacted The Insolvency and Bankruptcy Code, 2016 (IBC) to facilitate effective implementation of the Code to resolve problems and issues and recovery of non-performance assets.Does the introduction of The Insolvency and Bankruptcy Code reduce the incidents of NPA?

It is said that 'Experience is the best teacher, and the worst experiences teach the best lessons.' The banks and financial institutions have been facing their worst experiences for the last few years in their management of NPAs. Did they learn their best lessons so far? Let them throw away the bad experience but did they save their lessons learned? Ever since the banking reforms were initiated since 1990 various steps were taken to arrest the deterioration in the management of NPA which has not realised the desired result and the warning of RBI in their Financial Stability Report that the level of NPA may reach a staggering 14.5 % during September 2021, is a confirmation of the failure of the banks and financial institutions in India. Therefore, it should have been prudent for the government to undertake a realistic study on the reasons for the deterioration of the quality of financial assets and take such steps to reduce the incidents of NPA.

The find effective solution to the problem of NPA is a challenge and the causes of the problem should be understood in their correct perceptive so that effective curative steps can be innovated. 'Success or failure is caused more by mental attitudes than my mental capabilities.' And 'No condition or set of circumstances is in itself a calamity to be feared. It is our reaction to it that makes it a 'waterloo' or a field of triumph.' What is happening is thatinstead of treating the cause of stress, the symptoms of stress are treated which may give a temporary relief and not cure.The approach of banks and financial institutions should be based on the evidence that there are three types of sickness in the industry and commerce which are (1) born sick (2) acquire sickness and (3) sickness thrusted on them. Depending the nature of sickness, the right and effectiveremedy can be found for which the market, the industrial andcommercial environment and circumstantial realitiespertaining to the economy, national and global, are to be understood first in their correct stand points. To effectively face the challenges, concerted, cooperative and combined actions are required by the stake holders of banking and financial institutions.

The major stake holders of banks and financial institutions are the lender, the borrower, Reserve bank of India being the apex agency to supervise the banking activities and government being the policy and law makers. All the stake holders havetheir respective powers within their domain to tackle the problems coming within their domain. Unless they understand the problems being faced with regard to the stressed account and take a sustained unified actionin unison, resolution of NPA cannot be achieved.Some tines the problem may be beyond the control of all the stake holders like the one which is being experienced now because of Corona pandemic.

What is very essential to achieve the objectives is the requirement of a dynamic human resource having the following qualities. (1) knowledge and analytical skills. (2) to undertake trend analysis and logical approach to the problems (3) capacity to take timely decisions (4) an intuitive thinking (5)strong service orientation devoid of any job alienation (6) displaying quality of leadership (7) forecasting impending events.Empowering the banks and financial institution to create a dynamic robust leadership leading and inspiring the workforce to achieve the state of self-actualisation to meet the challenge posed by Non-Performing Assets are the inevitable ingredients for the veritable success.Hence, the establishment of new Asset Reconstruction Company is not a viable and a tangible solutionbut strengthening and empowering the existing financial set up with the requisite power to take decisions without fear or favour is a better alternative solution.An effective practical and pragmatic training programme with technological innovation should be established.

In the ultimate analysis what is needed is to understand the banking business in its entirety and prospective. 'Understanding is needed as much for the immediate task of effectiveness today as it is for work on the future many years hence. It is a necessary tool for any executive who takes seriously his entrepreneurial responsibility. And it is a tool which neither be fashioned for him nor wielded for him. He must take part in making it and using it. The ability to design and develop this tool and the competence to use it should be standard equipment for the business executive.' To be more than a figure head for the talents given in his keeping, the chief executive of the bank and the financial institution should accept his responsibility for making the future happen. It is the willingness to tackle purposefully this task of making the future happen, the most important task of banks and financial institution that distinguishes the great bank and great financial institution from merely competent one, and the banking and financial institution builder from the executive-suite custodian.