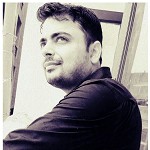 Benami is a Persian term which essentially means something “without a name”. However, in the present context, it means proxy. So, a benami property is a property bought by the original owner using a proxy. This helps him park his unaccounted money safely while avoiding paying taxes to the government at the same time. Benami transactions are quite prevalent in land purchases, where unaccounted money is used to make the purchase.

In the last few months we have seen a major crackdown on Benami properties and their owners by the Government. Specialized Anti-Benami units have been set up by the Income Tax department across the country and in almost every state and thousands of properties already stand attached under the Prohibition of Benami Property Transactions Act, 1988 [as amended in 2016] (hereinafter "Benami Act"). This article endeavors to give you a bird's eye view of what exactly does this law entail, what kind of transactions are outlawed, the civil and criminal implications/sanctions imposed by the Benami Act on persons entering into such transactions, and finally, how the anti-benami law operates and the defences/exceptions/remedies available against action taken under the Benami Law.

The Prohibition of Benami Property Transaction Act, 1988 was enacted in year 1988. However due to some political gaps and some other reasons this act could never came into force for almost 28 years. However to curb black money new government who came in power in year 2014, revised the Act and broadens its scope, with the insertion of 63 new sections and changing its name to “The Benami Transactions (Prohibition) Act, 1988” with an aim to not only track the Benami properties but also Benami transactions, and made it applicable with effect from 1st November 2016, surprisingly 7 days before the date of Demonetization. Now under this Act Benami includes every transaction, properties either moveable or immovable, bank accounts and any other transaction, which falls within the purview of this law.

"Benamidar" means a person or a fictitious person, as the case may be, in whose name the benami property is transferred or held and includes a person who lends his name.

To begin at the beginnings, let us examine what a 'Benami Transaction' is:
(A) a transaction or an arrangement
a. where a property is transferred to, or is held by, a person*, +
the consideration for such property has been provided, or paid by, another person; and

ii. a person standing in a fiduciary capacity for the benefit of another person towards whom he stands in such capacity and includes a trustee, executor, partner, director of a company, a depository or a participant as agent of a depository etc. ; or 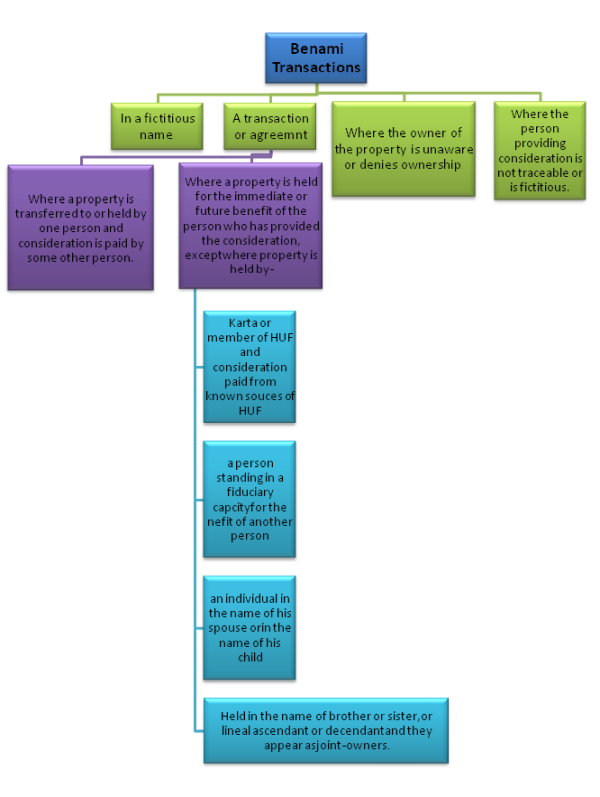 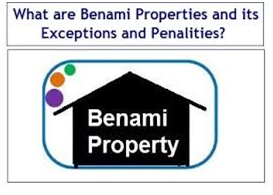 (ii) stamp duty on such transaction or arrangement has been paid; and

(iii) the contract has been registered

thereof may result paying the consideration. Thus, acquisition of a property in the name of a person other than the one into a Benami Transaction.

*"Property" means assets of any kind, whether movable or immovable, tangible or intangible, corporeal or incorporeal and includes any right or interest or legal documents or instruments evidencing title to or interest in the property and where the property is capable of conversion into some other form, then the property in the converted form and also includes the proceeds.

It must be noted that, contrary to popular misconception, the application of benami law is not confined to immoveable properties alone. The term 'property', for the purposes of Benami, is quite wide and includes within its wide ambit: assets of 'any kind'; whether movable or immovable, tangible or intangible, corporeal or incorporeal; and not only that, it also includes any right or interest or legal documents or instruments evidencing title to, or interest in the property and where the property is capable of conversion into some other form, then the property in the converted form is included as well. In fact, the proceeds from the property are also included within the definition of 'property'.

Section 3 provides No person shall enter into any Benami transaction. 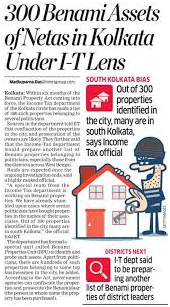 Benami transactions have been a part of Indian society for a while. One of the earliest instances of recognition of this practice can be traced to a Calcutta case wherein - a person purchased property in the name of his wife, and the same was held to be fictitious and therefore invalid. However, in the next few decades, the judicial stance towards Benami became a little less certain and there was considerable ambivalence with respect to the legality of the concept. The Privy Council in fact observed that the idea was quite unobjectionable. In fact, in some decisions, the Courts went on to observe that certainbenamitransactions werecustoms of the country and must be recognized as such, thereby giving it a veneer of legality, since custom was one of the important sources of law back then.

What are the implications of entering into a Benami Transaction?

Where the Initiating Officer, on the basis of material in his possession, has reason to believe that any person is a benamidar in respect of a property, he may, after recording reasons in writing, issue a notice within a period of 30 days to the person to show cause within such time as may be specified in the notice why the property should not be treated as benami property.

Notice will be issued to

Any such notice may be addressed as follows -

For the implementation of this Act and Adjucating part, Central Government shall appoint designated officers who shall be referred to as Inspecting Officers. The Inspecting officers shall be the officer not below rank of Deputy Commissioner or Assistant Commissioner of Income Tax, Designated for this purpose. The appellate authority under this Act shall be the Appellate authority as specified under Prevention of Money Laundering Act 2002. 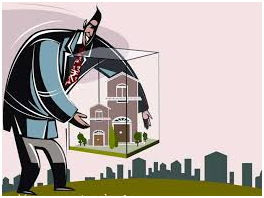 Special courts are also to be constituted by Central government, after consultation with Chief Justice of High Court, which shall hear the appeal made by the aggrieved parties who are not satisfied by the orders of High Court.

The author of this article is a member of ICAI and can also be reached at cadeepakbharti@yahoo.com