Today is the 4th day where after the PM's address to the nation on building a Atmanirbhar Bharat, we have been announcing in several tranches steps that we will take to give a stimulus to help and to extend assistance as the government.

2. FM said that the government is trying to give little assistance to the people

FM said that the government is trying to give little assistance to the people so that they don't suffer in this unfortunate time.

3. Atma Nirbhar Bharat is not about making India isolated

FM Sitharaman clarified that Atman Nirbhar Bharat is not about making India isolated. 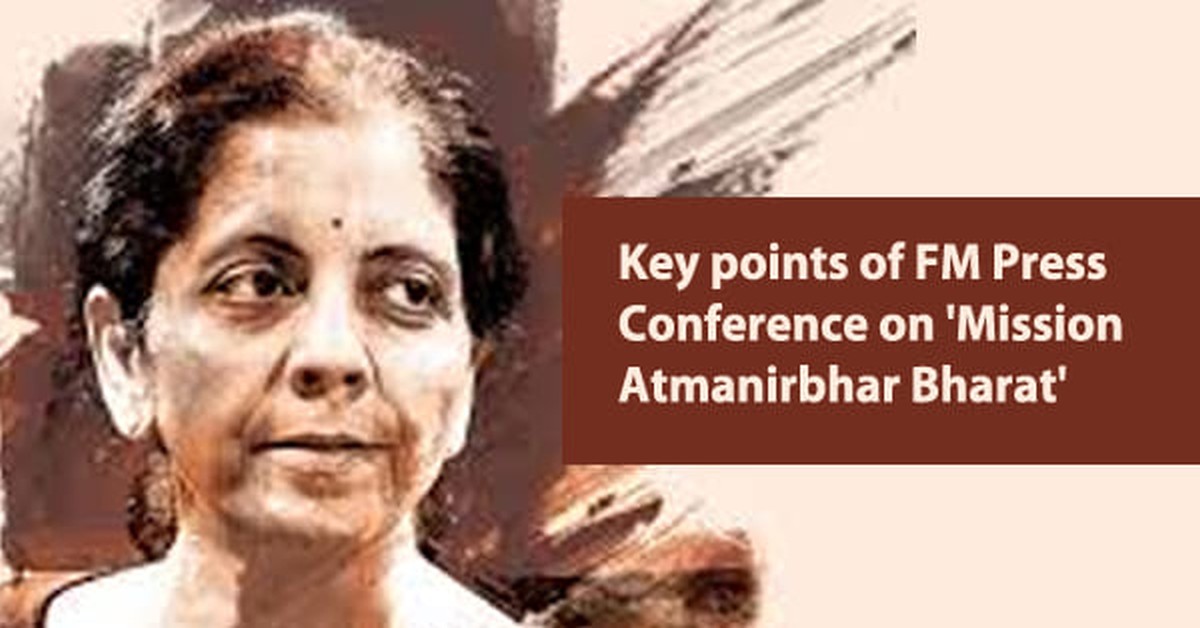 4. PM Modi's goal of self-reliant India is to prepare the country for tough competition

FM said that PM Modi's goal of self-reliant India is to prepare the country for tough competition and face challenges of global value chains.

7. Today's announcement to be focused on structural reforms in the sectors that are going to be the new horizon for growth

Today's announcement to be focused on structural reforms in the sectors that are going to be the new horizon for growth, more investment can be drawn, more production can be clearly marked, and certainly more employment opportunities can be generated in these sectors. – FM

8. Make in India to be a big contributor for Atma Nirbhar Bharat.

The foundation of Make in India initiative was laid earlier will be a big contributor for Atma Nirbhar Bharat. - FM

Attempts have already started for up-gradation of industrial infrastructure. I need to talk about this afresh. Industrial land banks, clusters been identified long back. Now using tech, we are ensuring these land parcels are identified.

Govt to make major announcements for eight sectors - coal, minerals, defense production, air space management, airports, MRO, distribution companies in UTs, space sector, and atomic energy. The first of the 8 sectors is coal. We are bringing in commercial mining in coal sector. Govt monopoly in coal mining being removed. This will be done based on a revenue-sharing mechanism instead of regime of fixed rupee per tonne. Any party can bid for a coal block and sell in the open market.

The fourth tranche of announcements will also include champion sectors and the incentive schemes for the promotion of new champion sectors will be launched in sectors such as solar PV manufacturing, advanced cell battery storage, etc.

India has the 3rd largest valued coal availability in its untapped mines, and yet we still import coal and emerging sectors suffer because raw material is not available. Regulations are required when there is a shortage. But this country has abundant coal. Coal bed methane will also be auctioned. Rs 50,000 crore for evacuation infrastructure is being provided.

Coal bed methane extraction will be auctioned. Rs 50,000 crore will be spent by the government towards evacuation infrastructure.

Nearly 50 coal blocks will be available for auction in near future. Upfront payment ceiling will be applicable.

15. New allotment for gasification from coal

For gasification, new allotments will be done for new diversified investments.

A seamless composite mining-cum-exploration-cum-production facility for the mineral sector. Mining of minerals: The sectoral reform we want to bring in here to give boost to the sector is to now have a seamless composite exploration-cum-mining-cum-production regime. 500 mining blocks will be offered through an open and transparent auction process.

We would also like to remove the distinction between captive and non-captive mines. Will help in the transfer of mining leases and sale of surplus unused minerals, leading to better efficiency in mining and production. Ministry of Mines in the process of developing a Mineral Index for different minerals. Rationalisation of stamp duty payable at the time of award of mining leases.

Bauxite and coal mineral blocks will be jointly auctioned to save electricity, boost employment, and develop state of art technology.

We need to be self-reliant in the defence sector. High tech equipment can be imported but some of the weapons can be made in India. Defence production: Make In India and Self-Reliance have now become a partner. We have now come to a conclusion that we shall notify a list of weapons and platforms which shall not be allowed for import. Every year this list will be increased. Done after consultation with Department of Military Affairs. The items in this list will now be purchased only from India. Indigenisation of imported spares. A separate budget provisioning will be done for domestic capital procurement. Will help reduce the defence import bill.

21. Ordinance factory board to be corporatised

Govt corporatise ordinance factory board, to be listed in stock markets. FM Sitharaman clarified that it will not be privatised.

She lists policy reforms initiated in the last couple of months to fast-track investments.

Time-bound defence procurement process and faster decision making will be ushered in by: Setting up of a Project Management Unit (PMU) to support contract management; Realistic setting of General Staff Qualitative Requirements of weapons or platforms; Overhauling trial and testing procedures.

Only about 60% of airspace is freely available. Optimum utilisation of airspace to reduce air distance and fuel consumption is necessary - FM

Six more airports are now up for auction under the PPP model. Additional investments likely to happen in 12 airports for better world-class facilities. AAI will get down payment of Rs 2,300 crore. First and second round of investment in 12 airports will get Rs 13,000 crore.

26. Aviation sector to get benifit of Rs 1,000 crore from better utilisation of airports

Maintenance, Repair and Overhaul (MRO): India has the capacity - manpower and skills, it can be a hub for many flights heading to South-East Asia and westwards.Tax regime for MRO ecosystem has been rationalised. Maintenance cost of airlines will come down. Restrictions on utilisation of the Indian airspace will be eased so that civilian flying becomes more efficient. Will bring in benefit of about Rs 1,000 crore per year.

The power distribution companies in UTs shall be privatised. Will be in line with tariff policy which is soon to be announced. DISCOM inefficiencies will not burden consumers. - FM Sitharaman

Privatisation of the discoms will bring stability in the power sector. Will help timely payment too - FM

Rs 8,100 crore outlay for viability gap funding in social infrastructure, by increasing the quantum from 20% to 30%. - FM Sitharaman

30. Private space tech cos can now use ISRO's facilities

Space: India has ISRO, which has brought a lot of laurels. However, pvt sector also doing a lot of work in the arena now.

We want the Indian pvt sector to be a co-traveller in India's space sector journey. Will provide level playing field for pvt companies in satellites, launches, space-based services. Liberal geo-spatial data policy for providing remote-sensing data to tech-entrepreneurs. Will provide predictable policy and regulatory environment to pvt players. They will be allowed to use ISRO facilities and other relevant assets to improve their capacities.- FM

Government to establish a research reactor in the PPE model for the production of medical isotopes. India has earned a lot of goodwill from countries where India has exported them. - FM Sitharaman

Government is taking steps to leave more money in the hands of people now, which will boost demand - FM Sitharaman

33. FM Sitharaman's address to be at 11 am tomorrow

34. Soon, private players can too participate in space travel programmes

35. PM had said in building a self-reliant Bharat,

we need to be strong. We are not looking inwards, it is making India strong and rely on its strength and be ready to face global challenges.

36. FM list some of those. Direct Benefit Transfer (DBT),