Analysis of provisions of Companies Bill 2012


PROVISIONS RELATING TO GOVERNMENT COMPANIES UNDER THE COMPANIES BILL 2012

From the above it is clear that there is no change in the definition of a Government Company under the Companies Bill, 2012 a s compared to the Companies Act 1956.

APPLICABILITY OF PROVISIONS TO GOVERNMENT COMPANIES

(a) shall not apply to such class or classes of companies; or

(b) shall apply to the class or classes of companies with such exceptions, modifications an d adaptation s as may be specified in the notification.

Given below is a list of Sections under Companies Act which are not applicable to Government Companies i.e. which have been exempted by means of gazette notifications issued from time to time:

Prohibitions and restrictions regarding political contributions

As per Clause 182 of the Bill, a Government Company is prohibited from making contributions to any political party, directly or indirectly.

Clause 139 of the Bill contains that Auditor for a Government Company, in respect of each financial year will be appointed by the Comptroller and Auditor General of India within 180 days of the commencement of the financial year. The person to be appointed should be an auditor duly qualified to be appointed as an auditor of companies under this Act and he shall hold office till the conclusion of the ensuing annual general meeting of the company.

Procedure for appointment of auditors

Appointment of Auditor in casual vacancy – In case of any casual vacancy in the office of the auditor of a Government company, the CAG will fill the vacancy within 30 days failing which the vacancy needs to be filled by the Board of Directors within the next 30 days.

In case of Government companies, CAG will direct the auditor about the manner in which the audit has to be conducted. Auditor will submit his audit report to the CAG along with directions issued by CAG, actions taken by the auditor and its impact on financial statements of the company. On receipt of the audit report, CAG can conduct a supplementary audit or comment upon/supplement the audit report. Company is required to forward the comments of the CAG to all people entitled to receive financial statements of the company and also place it in the AGM. CAG is also authorized to conduct test audit of any Government company or other companies which are owned or controlled by Government, directly or indirectly, by issuing an order in this behalf and the report generated out of such audit will be presented by the CAG to the concerned State or Central Government who in turn will lay it before the State Legislature or Both Houses of Parliament, as the case may be, respectively. 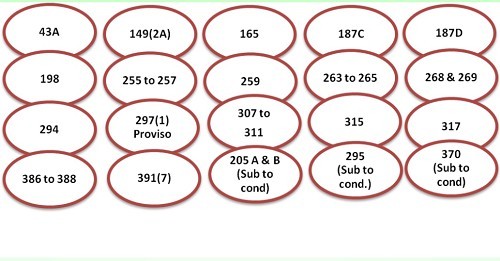 As per Clause 161(3), the Central or State Government may nominate any person as director on Board of a Government Company by virtue for their share holding in that company, subject to provisions of Articles of Association.

For each Government company, the concerned Government is required to cause annual report to be prepared, on working and affairs of that company, within three months of the annual general meeting in which the audit report along with supplemental report or comments of CAG are placed and the said annual report will be placed, as soon a s the report is ready:

- In case of Government companies in which only Central Government is a member - before both Houses of Parliament together with a copy of the audit report and comments upon or supplement to the audit report, made by the Comptroller and Auditor-General of India,

- In case of Government companies in which only State Government is a member – before the House or both Houses of the State Legislature together with a copy of the audit report and comments upon or supplement to the audit report,

- Provisions regarding annual report as mentioned above shall also apply to all Government companies which are under liquidation.

- In case of audit of accounts of a Government company which is under liquidation, the official liquidator shall forward a copy of the audit report to the Central or State Government or to both as the case may be.

- In case the liquidation proceedings of a Government company are not concluded within a period of one year, then the official liquidator is required to prepare a statement with respect to the proceedings in, and position of, the liquidation, get the same duly audited and file a cop y thereof to the Central or State Government or both, as the case may be.