In the Budget 2019-20 presented by the Finance Minister Piyush Goyal on 1st February 2019, has introduced major changes in the Direct tax. Here' s a summary of all the major changes made in the Income Tax Act, with images from the Finance Bill 2019, to avoid any confusion.All the changes in the Budget 2019-20 will be applicable from 1st April 2020.

1. No change has been proposed in the Income Tax slab rates. However, the Income Tax rebate under section 87A has been increased from the current Rs. 2500 to Rs. 12,500.

3. Section 16 of the Income Tax Act which deals with the deduction from Salary, has been amended where the Standard Deduction limit has been raised to Rs. 50,000 from the existing Rs. 40,000. The same shall become applicable from 1st April 2020.

4. Amendment of Section 23 of Income Tax Act, where deals with ascertaining the annual value of the house and provided an exemption to consider 1 self-occupied house has now been increased to 2 houses. 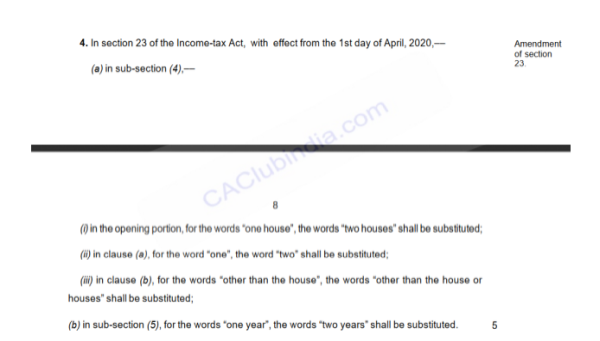 5. Amendment of Section 24, which deals with the deduction of the interest on House loan, has been amended to include the words 'aggregate' in order to specify the inclusion of two residential house now permissible. The deduction limit remains same of Rs. 200,000, however it shall now be extended to owning of up to two houses.

7.Amendment of Section 194A, which deals with Interest other than "Interest on securities". It was said that any income earned from bank deposits which was other than interest on securities, TDS shall be deducted if the earning exceed Rs. 10,000. The same has been revised to Rs. 40,000. So, for the bank interest now TDS will not be deducted for interest earned up to Rs. 40,000.

You can download the Budget Speech by Finance Minister Piyush Goyal from the Link given below.
https://www.indiabudget.gov.in/ub2019-20/bs/bs.pdf

Also, you can download the Finance Bill 2019 for all other changes, here.

Below are the expectation that the industry was hoping will be announced in the budget. Read below to find out how many expectations were actually met.

Every year before the budget is announced, industry presents its expectations from the budget. Autonomy bodies like CII, FICCI, ICMAI and many more authorities present a pre memorandum budget. It is a detailed document which entails the changes that the industry is expecting for the Government to announce in the upcoming budget.

Here, we have presented a summary from the various pre memorandum budgets extracting the pre-budget expectations for Budget 2019-20.

The Pre-memorandum budget by FICCI talks about the various issues faced by companies, individuals and various sectors in details. It covers the issues that attention and a proposed solution to it.

Expectations from the Budget 2019-20 for Companies/Firms/LLPs

For the companies, it has proposed-

Expectations from the Budget 2019-20 for Individual taxpayers

For the individual taxpayers, it compares the current slab taxation rates with the international taxation system, where it states that the peak tax rate of 30% is charged on a significantly higher income in other countries as compared to India. Thereby, proposing to increase the income bracket for peak tax rates.

It also proposes to increase the slab rates by further Rs. 50,000 increasing the basic exemption limit to Rs. 300,000.

It further states complete abolishing of the existing surcharge of 10% & 15% for individuals having a total income of more than Rs. 50 lakhs and Rs. 1 crore respectively as it discourages entrepreneurship and makes other countries more lucrative.

You can read the complete pre memorandum budget for a detailed sector wise and chapter wise analysis.

The Pre-memorandum Budget 2019-20 specifically talks about the changes that can be made for the growth of the industrial economy.

Expectations from Budget 2019-20 for Corporates by CII

In the report, it specifically mentions the high tax rate on the corporate sector which is currently the highest in the world. It proposes to bring down the same to unconditional 25% and gradually to 18% in a phased manner.

For the loss that might be caused due to a decrease in the tax rate, it can be mitigated by taking away any tax incentives such as the one in under section 115BA

It further states to review the FTAs with other countries as due to GST and reduction in customs duty the import of goods have become relatively cheaper thereby making it difficult for domestic manufacturers to compete.

Therefore, to encourage the 'Make in India' initiative it is proposed to not decrease the customs duties any further and introduce favourable reforms for domestic manufacturers.

You can read the complete pre memorandum budget for a detailed analysis.

Here's a link to the Pre-Memorandum Budget presented by CII for the upcoming budget 2019-20-
https://www.ciiblog.in/cii-pre-budget-memorandum-2019-20/

Deloitte in its report further emphasises on the expectation of lower corporate tax rate bringing it down to 25%. It further states to decrease the MAT Rate which is currently only 5% lower than the normal tax rate.

It seeks clarification and certainty on issues such as taxability on the issuance of shares to residents in case of startups and to non-residents.

For the individual taxpayers, it states-

"The government is likely to come out with tax relief for the middle or lower income groups in the form of some changes to the tax slabs. It is unlikely that the finance minister will announce sweeping changes in the tax rates. It is, however, important to notify the tax rates because without notifying tax rates, the government cannot collect taxes during the intervening period - from April 1 to the next full-scale budget after the new government is sworn in. The budget will also formalize the decision to exempt from tax, the lump sum withdrawal of National Pension Scheme from 40% to 60% at the time of exit - It will come into effect from April 1."

Here's a link to the Pre-Memorandum Budget presented by Deloitte for the upcoming budget 2019-20-
https://www2.deloitte.com/in/en/pages/tax/articles/2019-budget-insights.html

4. The Institute of Cost Accountants of India

In the comprehensive pre memorandum budget proposed by the ICMAI, it talks about the detailed tax reforms that can be made both in the direct tax and indirect tax for corporates and individuals. It further elaborates the expectation from the various sectors.