What Is The Story?

What is a ‘tragedy’?

Tragedy is a part of life if not life as such: Klein, in his book, Tragedy said that tragedy is a form of drama, story or novel based on human suffering that invokes in its audience an accompanying catharsis or pleasure in the viewing.1

And literature study reveals that Greeks were adept at the art of tragedy, but it seems those days are over.

Greece has defaulted on its payment, Grexit and the ongoing negotiations between Greece and its creditors had been news in every part of the world since few months.

So, does the Greece crisis sounds Greek to you?

This article explores the Grecian discontent with below heads:

a.  A European dream of convergence.
b. Grecian Formulas.
c. A Greek Holiday.
d. A winter of discontent.
e. Greece on a fault line.
f. Greece’s “No”, so what’s next?
g. Summary and conclusion: The Moral of Greek Tragedy.

A European dream of convergence:

Prior to joining the EU, Greece had its own currency ‘Drachma’. A depreciated drachma when compared with the German Deutschmark and French Franc helped Greece’s export. Greece economy suffered on account of a weak currency during the oil shocks of 1973 (first oil shock) and 1979 (second oil shock) as Greece imports most of its oil. Increased oil prices had cascading effects causing inflation during the 1970s.

Also the interest rate for consumer credit had always been very tight at around 25% as Greeks were regarded risker and less likely to repay a loan than their European peers. In the second half of the 1990s, Greece saw its chance of achieving economic convergence.

For the convergence, the rules of the games were:

a. The budget deficit must be kept below 3 per cent of GDP.

b. Total public debt has to be less than 60 per cent of GDP.

c. Countries should have an inflation rate within 1.5 per cent of the three EU countries with the lowest rate.

On 3rd May 1998, EU council rejects Greece entry into the club citing excessive public sector deficit and its inability to meet the convergence criteria.

But then in April 2000, EU endorsed Greece entry to the union.

What changed in those 18 months which enabled Greece to achieve economic convergence is still a mystery. However more than economics, political endorsement is seen as a primary reason which led Greece’s entry into the EU club.

So how did Greece achieved the convergence criteria in 18 months, Michael Lewis offers an explanation to this:

In 2000, after a flurry of statistical manipulation, Greece hit the targets. To lower the budget deficit the Greek government moved all sorts of expenses (pensions, defense expenditures) off the books. To lower Greek inflation the government did things like freeze prices for electricity and water and other government supplied goods, and cut taxes on gas, alcohol, and tobacco. Greek government statisticians did things like remove (high priced) tomatoes from the consumer price index on the day inflation was measured.3

As they say 'pride comes before a fall’, during the boom, people bought more than they needed: homes, second homes, holiday homes. Middle class Greeks bought Porsches which were made in Germany and thus went the saying that Greece bought manufactured imports from Germany as none of what went into luxury car were made in Greece.

How were all these purchases financed?

The government too went shopping and among its largesse included doubling of the Greek public sector wage.

Greece’s national railroad is also among one of those largesse. It had been inefficient so much so that, twenty years ago a successful businessman turned minister of finance named Stefanos Manos pointed out that it would be cheaper to put all Greece’s rail passengers into taxicabs. 5

Another area were Greece outspends its European peers is defense.

Greece was in 5th position in world in cumulative armaments import during 2004- 2009 as seen in Table 1, here figures are SIPRI Trend Indicator Values (TIVs) expressed in US $ m at constant (1990) prices.

But when adjusted for either size of the economy or population, Greece stood 2nd in the world well ahead of India, China and South Korea.6

Further the Greece government showered generous pension benefits at age of 55 years to men and 50 years to women on their retirement. Pension expenditures account for over 16% of GDP, and transfers from the budget to the pension system are close to 10% of GDP.8

The largesse doesn’t stops here, tax avoidance is rampant in Greece. Even top doctors reported less than taxable income. It is generally taken as granted that in Greece only the salaried employees who can’t evade taxes, pay taxes as their tax is deducted from their salary.

The extent of tax evasion can be gauged from the statement of a Greek tax collector that “Somewhere between 30 and 40 percent of the activity in the Greek economy that might be subject to the income tax goes officially unrecorded…”9 Ilias Plaskovitis, general secretary of the Greek Finance Ministry, told the New York Times in 2010: 'There are many people with a house, with a cottage in the country, with two cars and maybe a small boat who claim they are earning €12,000 a year. You cannot heat this house or buy the gas for the car with that kind of income.'10

A winter of discontent.

Winston Churchill once admired Greece’s contribution to the World War II by declaring “Hence we will not say that Greeks fight like heroes, but that heroes fight like Greeks.”11

So how come these heroes were caught with their trousers down when dawn arrived.

Unlike in US, Greeks bankers didn’t toyed with mortgage backed securities or leverage themselves to the hilt, or pay themselves huge sums of money. The biggest problem the banks had was that they had lent roughly 30 billion euros to the Greek government—where it was stolen or squandered. In Greece the banks didn’t sink the country. The country sank the banks.12

The Greek economy grew by 144% from 2000 to 2007 with the cheap credit. But as the economy stopped growing in 2008, debt problem came haunting Greece. Greece government had been running a fiscal deficit in excess of 5% of GDP, at times above 10% of GDP during this years. As the economy slowed in 2008, fiscal deficit as % of GDP increased further, this lead to increase in public debt and the debt to GDP ratio rose higher as seen in figure 1. 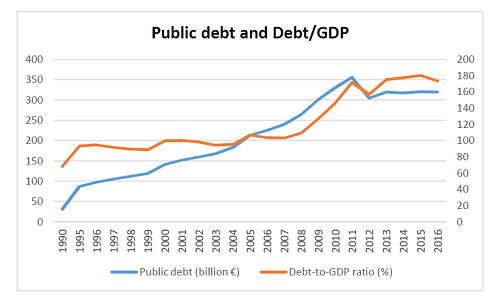 As Greece tried to borrow to refinance its debts, creditors sought higher interest on debt which increased from around 4.5% in 2008 to approx. 28% in 2012 as seen in figure 2. 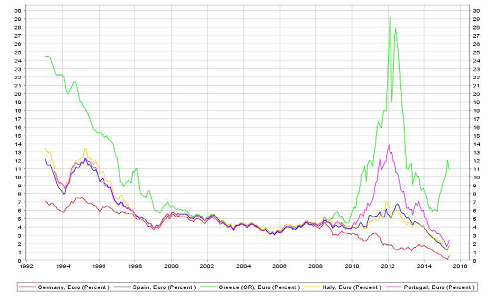 When compared with Germany, the European powerhouse, Greece productivity had been lesser since 1990. But the productivity gap increased drastically since 2008, resulting in un-competitiveness of the Greek economy as seen in Figure 3. 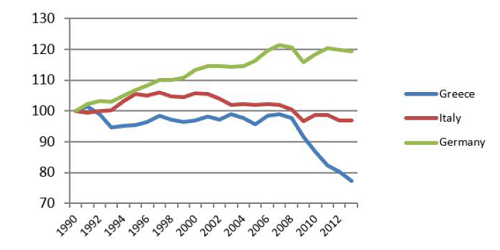 To a large extent, the lack of productivity growth accounts for the hard landing of Greece. The austerity measures implemented reduced the spending by households and firms and increased the inequality in Greece.

Greece on a fault line.

At the heart of the ongoing fuss is simple question to answer:

How much hair cut Tsipras’s government is ready to take and how much relief can Greece creditors offer it this time?

However with recent coming of Tsipras’s party Syriza into power and its poll promises the set goals have to be revisited.

To this, Greece government has been following a “hot and cold” strategy, on one hand they are threating to blow the euro zone and on the other hand appealing emotionally.

The Greece finance minister, Varoufakis, recently boasted to the New York Times that “little Greece, in order to survive, [could] bring down the financial world,”16

“…We are shouldering the dignity of our people, as well as the hopes of the people of Europe. We cannot ignore this responsibility. This is not a matter of ideological stubbornness. This is about democracy. We do not have the right to bury European democracy in the place where it was born.” 17

The proposal creditors offered to Greece in the ongoing negotiation was 3.5% primary budget surplus, 1% lower than what was decided in 2012. For this revised target to be achieved creditors want Greece to make cuts in its generous pension system and an overhaul of value added tax (VAT) system.

Pension expenditure accounts for 16% of the GDP. Cuts have already been made to pension expenditure by increasing the retirement age for pension eligibility and others such measures taken, so a further cuts in pension system will be directly against Syriza’s election promises where it referred pension cuts as “humanitarian crisis.”

It is for this promises Tsipras passed the buck to Greek voters by conducting a referendum and urging them for a ‘No’ for the austerity proposals of the Troika, which the voters did.

As Greeks overwhelmingly rejected the troika’s demand of further austerity in the July 5th referendum, the ball has now moved to the court of the troika. The Greek Prime minister, Tsipras, has been speaking of wanting to stay in euro zone. So when Tsipras and Merkel meet hereafter they will decide the fate not only of Greece but also of Eurozone and the faltering European spirit, as such they must agree to reforms as well as to debt relief.

For this to happen, Tsipras needs to assure Merkel that Greece will live within its means, not as a chronic ward of Europe. To ensure such an outcome, debt relief and tough reforms should be phased in over time, according to an agreed schedule, with each party following through on its commitments, as long as the other does, as well.18

If they are able to address these concerns, confidence is likely to return to the Greece economy.

Despite the win in referendum it is unlikely that either Tsipras or other Eurozone member wants Greece to exit euro zone.

Firstly, Tsipras wants just better terms from creditors. He is likely to push the creditors till a point which will help him explain Greece voters that he has been able to get a better deal than the previous Greece governments.

Secondly, a Grexit will move capital from euro assets and from emerging countries to safe dollar havens. This will lead to higher interest rates in Europe and the Greek contagion is likely to spread to other venerable countries like Portugal, Spain etc. If a Grexit comes true, European dream of ‘United States of Europe’ will fall flat on the face as evidenced in a BBC new piece:

“...the euro is not forever for any member, it is not forever for all members. And once that clonking penny drops for global investors, the notion that the whole project will fall apart not tomorrow, but one day will increasingly become the default view.” 19

As such both parties are likely agree on a plan that provides Greece some debt relief and reschedules a portion of the debt over a longer period than the existing average tenure of about 16 years.

Summary and conclusion: The Moral of Greek Tragedy

Debt fueled growth busted bringing poverty and inequality to the ordinary Greeks, but what it will finally lead to is difficult to contemplate or 'It's too soon to tell' in the words of Chinese Communist leader Zhou Enlai.

So what Greece’s government can do:

1. Gradually reform the pension system in a way that won’t depress the Greece economy further.

2. Most Greece business are small and medium enterprises a reformed VAT system and a credit system that will enable credit availability to these enterprises will be helpful.

3. The next issue pertains to the taxation system in Greece. A system which facilitates tax compliance as well as clamp down on tax evaders will prove helpful in reducing fiscal deficit.

15. Figure 3: Total factor Productivity, normalized in 1990, Source: Paolo Manasse, “What went wrong in Greece and how to fix it: Lessons for Europe from the Greek crisis,” VOX, CEPR’s Policy Portal, 12th June 2015.