This is the real photograph aged about 6-7 yrs from Dehradun drum instead of school bag, beating in front of everybody’s gate home. I asked him whether he goes to school or not he straight replied “Nahi". I further asked him should I give you some books he again said "Nahi Rupya Do" which provoked me to write on Education Cess. 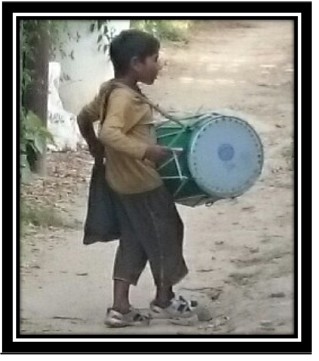 On Dated 15 November 2015 I collected the data from the website of INCOME TAX https://incometaxindiaefiling.gov.in/ and then I analyzed on my own that for fin-year 2014-15 (till 31 October 2015) approx 82763.58 Crores of rupees has been collected through EDUCATION & HIGHER EDUCATION CESS(This data is only based on taxpayers who filed the return through E-FILING).

The calculation is attached as an annexure but before moving there here are few points.

1. The progress of a country directly relates with the progress of its citizens. Education is the base of progress of each person. To progress correctly, the person should get sufficient education. To make a person more educated, there must be sufficient schools and sufficient facilities in those schools.

3. We need sufficient data showing utilization of education CESS but it is really tough to gather right data from government websites. We can see CESS collected figures but no figure for utilization of CESS. Generally Education CESS is utilized for increment and spread of education. For example meal projects, girl registration for education, free books, fund for construction of schools, scholarships etc.

4. The primary education has separate account called Prarambhik Shiksha Kosh. The amount is utilized for Sarva Shiksha Abhiyan and free meal to students. The education CESS is also utilized for providing concessional loan for higher education.

5. Government is claiming that there is lack of fund for education purposes though there are huge allocations for education in budgets every year and available funds of education CESS collected from tax payer.

6. Government is claiming that drop out from schools are reduced after introduction of CESS. But it’s a claim without providing any data for it. In spite of all these people are sending their children to private schools. What is the reason?

7. It has proved that all education CESS we paid to government is not properly utilized by education purposes. Then where the money goes and in whose pockets is the unsolved mystery. Due to lack of money, many talented brains of India are doing lower level job and killing their dreams. Politicians are becoming rich at the cost of abuse of talented youth of India.

Unless we become aware and raise our voice for accountability of usage of money we paid as tax, we can’t make our country truly progressed.

ALMOST 10 FINANCIAL YEARS HAVE GONE INTRODUCING EDUCATION CESS BUT STILL NONE OF THE GOVERNMENTS HAS SO FAR SHOWN ANY IMPROVEMENT IN THE FIELD OF EDUCATION?

SO HAS THE TIME COME THAT GOVERNMENT SHOULD TAKE BACK THE EDUCATION AND SECONDARY HIGHER EDUCATION @3%?

LATEST:- I WAS ABOUT TO COMPLETE THIS ARTICLE WHEN I CAME TO KNOW THAT NEW CESS HAS BEEN INTRODUCED FROM TODAY NAMED AS “SWACHH CESS @.5%”

The PSK allocation as per revised estimates for the Sarva Shiksha Abhiyan (SSA) for the last three financial years is as under:

This information was given by the Union Human Resource Development Minister, Smt. Smriti Irani in a written reply to the Rajya Sabha question.