The Fiction of Loan Waiver to Capitalists : Arun Jaitley


Over the last few days, a rumour is being propagated regarding waiver of loans of capitalists by banks. Time has come for the nation to be apprised of facts in this regard.

Between the years 2008 to 2014, Public Sector Banks disbursed disproportionate sums of loans to several industries. The public needs to ask the rumour mongers at whose behest or under whose pressure were such loans disbursed. They should also be asked that when these debtors delayed in repayment of their loans and interest thereon to Public Sector Banks, what decision was taken by the then Government.

Rather than take firm decision with regard to such debtors, the then Government, through relaxation by banks in loan classification kept these defaulters as non-NPA accountholders. These loans were restructured through this, the loss to banks was kept hidden. The banks kept giving loans repeatedly to these debtors and kept ever-greening the loans.

The current Government recognised this nexus and took firm decisions with regard to the defaulters. Insolvency and Bankruptcy Code was enacted, and by amending it, in respect of companies whose money was not returned to the banks, decision was taken that the debtors concerned would not be allowed to participate in the business of such companies.

At the same time, banks were given necessary capital so that Public Sector Banks become strong and capable of contributing to nation's development. The reason for giving capital to banks is that these banks may become mazboot, i.e., strong, rather than mazboor, i.e., hard-pressed. Public Sector Banks have been provided capital in the past as well. During 2010-11 to 2013-14 too, Government provided banks an amount of Rs. 44,000 crore for recapitalisation. Was that also for waiving loans of capitalists?

During the period of aggressive lending from 2008 to 2014, the gross advances of Public Sector Banks increased from about Rs. 34,00,000 crore. Despite repayment not being regular on these, through relaxation in loan classification, banks continued to keep defaulters as non-NPA accountholders by restructuring them. Through this, the losses of banks and their precarious position was kept under the carpet. 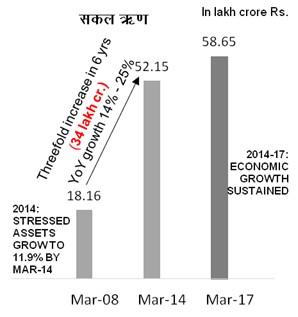 Transparent and realistic recognition of NPA:

Asset Quality Review carried out for clean and fully provisioned balance-sheets in 2015 revealed high NPA. Through correct recognition of NPA, the NPA amount of Public Sector Banks rose from Rs. 2,78,000 crore in March 2015 to Rs. 7,33,000 crore in June 2017. Meaning thereby that those loans, of about Rs. 4,54,466 crore, which were actually fit to be NPA and were under the carpet, were recognised after intensive scrutiny under Asset Quality Review.

In the past, adequate provision was not made for expected losses from stressed loans under the relaxation available for restructured loans. Public Sector Banks initiated clean-up and NPA recognition, and made up-front provision for expected loss. Government envisage need of capital to the tune of Rs. 1,80,000 crore till FY 2018-19. Accordingly, Government provided for Rs. 70,000 crore. As a result of Indradhanush despite high NPA and the need for consequential provisioning, Public Sector Banks were successful in complying with Basel III norms. Between 2013-14 and the first quarter of FY 2017-18, provision of Rs. 3,79,080 crore was made to deal with expected losses, as against provision of Rs. 1,96,937 crore made in the preceding 10 years. 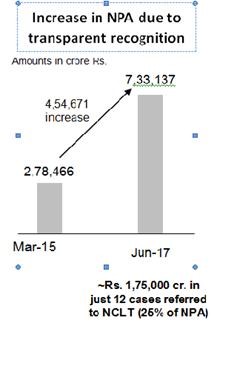 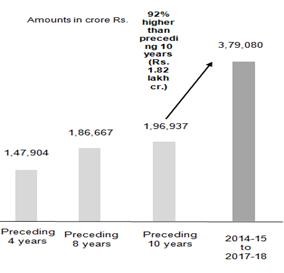 Government has not waived any loans of big NPA defaulters as aforesaid. On the contrary, under the new Insolvency and Bankruptcy Code brought by the Government, cases have been instituted in the National Company Law Tribunal (NCLT) for time bound recovery from 12 largest defaulters in six to nine months, in NPA cases of Rs. 1,75,000 crore. Cases for the recovery of NPA dues from the assets of these big defaulters are under way at various stages.

To safeguard misuse of the legal process by unscrupulous and undesirable persons, this week, through an ordinance, Government has barred wilful defaulters and persons associated with NPA accounts from participating in the process under way in NCLT. Through these steps, for the first time in the country, Government has put in place a clean and effective system through which wilful defaulters of bank loans may be kept away from the management of their business and time bound recovery effected from them.

With the object of increase credit off-take and creation of jobs, Government has taken the big decision of capitalising Public Sector Banks. Under this, with maximum allotment in the current year, capital increase of Rs. 2,11,000 crore would be effected within two financial years. This would be arranged through Rs. 1,35,000 crore of recapitalisation bonds, Rs. 18,139 crore of budget provision, with the balance coming from raising of capital from the market (estimated potential Rs. 58,000 crore) by diluting Government shareholding. Through capital infusion, banks weakened by NPAs would become strong and become capable of raising adequate capital from the market. For receiving this capital, banks will have to carry out several reforms, so that such situations do not recur.

Through these strong steps taken over the last three years, not only have the problems received as legacy been addressed but reforms for rebuilding the strength of Public Sector Banks have been boosted. The process of creation of strong and large banks began with the integration of State Bank of India, and the recapitalisation announced will bolster this process. While honest businesspersons will be able to access loans from strong and reformed banks, strict and clear law and the all-round clean-up initiated by the Government would result in a clean system in the country.