Preface:- The moment when it was announced by the Hon’ble Finance Minister that the exemption is being provided to the levy of Education Cess and Secondary & Higher Education Cess, there was a sigh of relief that there will be reduction in the rate of service tax. Moreover, it was represented by the trade that the maintenance of separate accounts for Education Cess & SHE Cess consumes lot of time and instead, the tax rate should be consolidated and the appropriation of tax as Education Cess and SHE Cess should be done by the Centre at its own level. Hence, when it was heard that Education Cess and SHE Cess are abolished, the trade was happy that their request has been considered by the government. However, this feeling was just for few seconds because in the very next moment, a new levy called as ‘Swachh Bharat Cess’ (SBC) was revealed that was to be levied at the rate of 2% on the value of services under section 119 of the Finance Act, 2015 on specified services from a date to be notified in future. This news put all the service tax assessees in distress as the rate of service tax increased from 12% to 14% and a new levy in the form of ‘SBC’ was to be implemented in near future on specified services. Consequently, this lead to putting the assessees in the same situation as before and only the name of Cess was changed. This new levy of ‘SBC’ has been finally revealed by the government by way of issuance of various service tax notifications, circular and FAQs and this new levy is to have effect from 15.11.2015. This article is an attempt to analyse the statutory provisions of this new levy, ‘SBC’.

Overview of the statutory provisions and clarifications pertaining to SBC:- The government has issued a number of notifications, FAQ, circular etc. for levy of SBC. The provisions are summarized for quick reference as follows:- 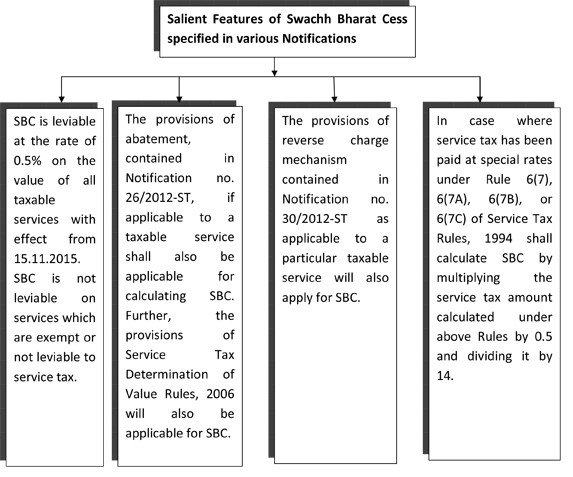 Apart from provisions specified in various notifications, a circular has also been issued which gives accounting code for payment of SBC, interest pertaining to SBC and penalty pertaining to SBC. Moreover, a ‘FAQ’ has also released which seeks to clarify various doubts and issues pertaining to SBC. The highlights of the clarification given in the FAQs are as follows:-

1. SBC would be levied, charged, collected and paid to Government independent of service tax. This needs to be charged separately on the invoice, accounted for separately in the books of account and paid separately under separate accounting code as notified. SBC may be charged separately after service tax as a different line item in invoice. It can be accounted and treated similarly to Education cesses.Apart from provisions specified in various notifications, a circular has also been issued which gives accounting code for payment of SBC, interest pertaining to SBC and penalty pertaining to SBC. Moreover, a ‘FAQ’ has also released which seeks to clarify various doubts and issues pertaining to SBC. The highlights of the clarification given in the FAQs are as follows:-

2. SBC is not integrated in the Cenvat Credit Chain. Therefore, credit of SBC cannot be availed. Further, SBC cannot be paid by utilizing credit of any other duty or tax.

4. As regards Point of Taxation, since this levy has come for the first time, all services (except those services which are in the Negative List or are wholly exempt from service tax) are being subjected to SBC for the first time. SBC, therefore, is a new levy, which was not in existence earlier. Hence, rule 5 of the Point of Taxation Rules would be applicable in this case. Therefore, in cases where payment has been received and invoice is raised before the service becomes taxable, i.e. prior to 15th November, 2015, there is no liability of Swachh Bharat Cess. In cases where payment has been received before the service became taxable and invoice is raised within 14 days, i.e. upto 29th November, 2015, even then the service tax liability does not arise. Swachh Bharat Cess will be payable on services which are provided on or after 15th Nov, 2015, invoice in respect of which is issued on or after that date and payment is also received on or after that date. Swachh Bharat Cess will also be payable where service is provided on or after 15th Nov, 2015 but payment is received prior to that date and invoice in respect of such service is not issued by 29th Nov, 2015.

In depth analysis of the above cited provisions:- On perusing the above provisions and clarifications, the following observations are worth noting:-

1. The notification no. 22/2015-ST dated 06.11.2015 seeks to levy SBC at the rate of 0.5% on taxable value of all services with effect from 15.11.2015. It is pertinent to note that section 119 of chapter VI of the Finance Act, 2015 specifies that SBC would be leviable at the rate of 2% on the value of all or specified services. This notification gives exemption to the levy of SBC beyond 0.5% thereby meaning that in the statue the rate of SBC is 2% but it is vide this notification that SBC will be leviable at the rate of 0.5%. This reflects the probability of fluctuating this SBC from time to time within a range of 2% of the value of taxable services. Moreover, in the section 119 of the Finance Act, it was indicated that SBC will be levied on certain specified services but this notification seeks to levy SBC on all services except exempted services.

2. The new levy SBC is being implemented with effect from 15.11.2015, in the mid of month which is not at all understandable and has increased The assessees will face practical difficulties in reflecting the amount of SBC for the month of November in the service tax return. Moreover, the government has also increased its task to make suitable changes in the return format. The new levy should have been made effect from beginning of a new quarter so that compliance could have been made little easy.

4. SBC is not cenvatable as stated in the FAQ released and available on CBEC website. This has tremendous adverse consequence to the assessees as SBC will become the cost and will not be available as cenvat credit. This is the major drawback of new levy as it ignores the concept of ‘cascading effect’. Moreover, as SBC is not cenvatable, service tax paid on input services consumed by exporters will form cost of exported goods/services thereby leading to export of domestic taxes abroad which will definitely go against the ‘Make in India slogan’ of the government. Further, it is remote possibility that the exporters will be able to claim refund of the SBC paid by them on various input services. The consequences of making SBC non­cenvatable are extremely adverse and far reaching. Hence, it is prayed that amendment is made in the Cenvat Credit Rules, 2004 as soon as possible because when all the provisions applicable to service tax are made applicable to this SBC, then the credit of SBC should also be allowed.

5. The major issue that is haunting the minds of the assessees is the absurdity in the effective implementation date of this new levy, SBC. Although, the notification no. 21/2015-ST dated 06.11.2015 specifies that the provisions of chapter VI of the Finance Act, 2015 pertaining to SBC will be applicable from 15.11.2015 but the applicability of Point of Taxation Rules, 2011 seeks to contradict this notification. This is for the reason that the section 119(5) of Chapter VI states that “The provisions of Chapter V of the Finance Act, 1994 and the rules made thereunder, including those relating to refunds and exemptions from tax, interest and imposition of penalty shall, as far as may be, apply in relation to the levy and collection of the Swachh Bharat Cess on taxable services, as they apply in relation to the levy and collection of tax on such taxable services under Chapter V of the Finance Act, 1994 or the rules made thereunder, as the case may be.” Consequently, the provisions of Point of Taxation Rules, 2011 are also made applicable due to which in certain circumstances, SBC is leviable even if service was provided prior to 15.11.2015. Moreover, the clarification of FAQ regarding applicability of Rule 5 itself is doubted. Furthermore, the time period for issuance of invoice is wrongly mentioned as 14 days instead of ’30 days’. The detailed analysis of the provisions of POTR with respect to SBC are as follows:-

Rule 5 of the Point of Taxation Rules, 2011 when service has been made taxable for the first time from a particular date:- According to this Rule, no tax will be payable under following two situations:-

(a) If the invoice has been issued and payment has been received before the date on which service became taxable.

(b) If the payment has been received before the service becomes taxable and invoice has been issued within 30 days from the date of completion of the provision of service.

If the above cited provisions of Point of Taxation Rules, 2011 are pursued, it is found that the FAQ clarifying that the Rule 5 of the POTR, 2011 will be applicable appears to be erroneous for the following reasons:-

Firstly, Rule 5 of POTR applies when a new service is taxed for the first time. However, SBC is not a new service rather it is new levy on existing taxable services. Although SBC is taxed for the first time but that cannot lead to conclusion that the provisions of Rule 5 of POTR would come into picture. On the contrary, according to author’s view, Rule 4 and Rule 7 of the POTR are applicable.

Thirdly, there is already contradiction between the provisions of section 67A of the Finance Act, 1994 and the Rule 4 of the Point of Taxation Rules, 2011. The provision of section 67A are produced for quick reference as follows:-

Section 67A of the Finance Act:- Date of determination of rate of tax, value of taxable service and rate of exchange

Good bye words:- On one hand, the government is promoting its slogan of ‘Ease of doing business in India’ and ‘Make in India’ while on the other hand, the legislations being introduced are defeating the very purpose of ease of doing business because they are complicating the taxation even more. Not only this, making SBC non-cenvatable, will have direct impact on exports of our Country because it amounts to exporting domestic taxes abroad. Well, all we can say is that although the purpose of this new levy is to make Bharat Swachh but on the contrary, this cess will clean the pockets of assessees!