I happened to scan through the statistics furnished by National Crime Records Bureau (NCRB) in their web site regarding the suicides committed by business people which prompted me to undertake an insight into the debt recovery approach and methods adopted by the banks and financial institutions. We have been hearing about farmers' deaths by suicide and governments' responses, both Centre and states, by way of loan wavers and other incentives to alleviate the hardships of the farmers. But no such reporting was ever published and highlighted and still not being brought out neither in social media nor in the print media and various news channels. There was and is a big spurt in such cases during the ongoing Corona pandemic attack. The NCRB reported that at least 11716 Indian business people died by suicide in 2020, more than farm suicides cases (10677). A perusal of National Crime Records Bureau (NCRB) will show the following statistics. 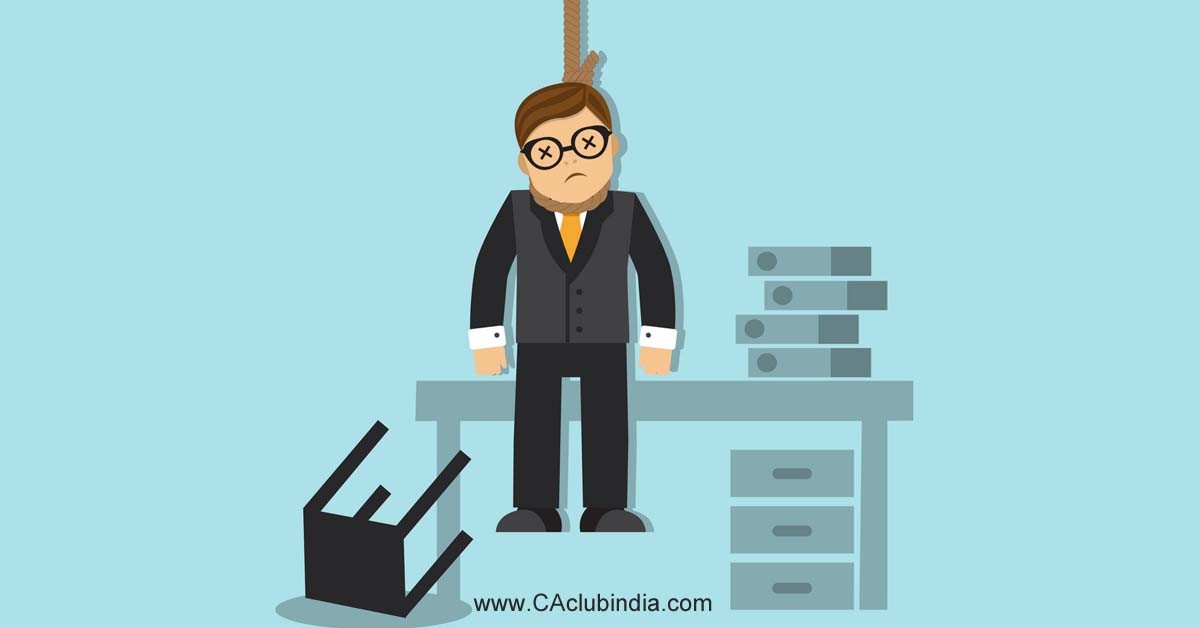 The above figures are based on the reported cases and many cases are wrongly reported under other causes. Considering the magnitude of the suicidal deaths taking place in the business sector especially when emphasis is being given in the sphere of Aatma Nirbhar Bharat Abhiyan, it is high time that a dispassionate, unprejudiced and unbiased review of the reasons for increasing incidents of such cases has to be undertaken to arrest the trend and induce confidence among the entrepreneurs particularly the younger generation.

The prime reasons for such suicides among business people are on account of financial stress factors leading to depression and other psychological afflictions coming out of non-fulfilment of their financial commitments to the bank and financial institution and other creditors. Therefore it is imperative that a study has to be initiated to understand how bank finance leads to the borrowers' suicides. It is stated "Mental health and financial health are closely linked. Being in a difficult financial position can have a negative impact on your mental health, and mental health concerns can be exacerbated by poor financial well being."

Motives for suicides may be many. A truism in suicide literature is that "not all persons who commit suicide want to die and not all persons who want to die commit suicide". "The intentionality and lethality of suicide are important dimensions which describe the motive behind the act." Many studies have been undertaken on the connectedness between debt and physical and mental well- being. It is found that unmanageable debts and its constant presence and pressure can lead to severe stress and depression which are linked to increased suicide rates. It also affects the interpersonal relationship instability affecting the sense of physical well-being and emotional security. An unmanageable debts scenario would have a severe adverse impact on mental health causing anxiety, mental stress and depression. It affects the mental acuity and sensitivity and all aspects of one's life, personal, professional and social, creating a vicious life cycle.

"Depression affects job performance and productivity, engagement with one's work, communication with co-workers, physical capability and daily functioning.Once a person is incapable of focusing or completing their work, they're unable to bring in income, thus fueling the cycle of debt and mental health." The attitude and the ruthless implementation of provisions of recovery Acts to recover debts by banks and financial institutions create such devastating effect on the psychic disposition of the borrowers certainly affect the metal acuity,financial security and physical well-being.

Whereas farmers' suicides have been highlighted, debated and published widely catching the attention of the nation creating a hue and cry about them, no serious attempt has been made to take cognizance of such serious incidents affecting the business community and to study its impact on the economy of the nation by the government, Reserve Bank or by the various organizations working for the welfare of business enterprises. The attitude and the approach of the banks and financial institutions towards debts recovery needs a more practical and pragmatic approach and considerations than mere recovery of dues but an overhaul contemplation on the human existence and welfare and its impact on the national economy. In other words, debts recovery should be implemented with a human touch to enhance national wealth and GDP.

It is needless to say that recovery of debt is one of the most important aspect of bank advance and credit monitoring not only from the point of view of profitability but also to augment the lendable funds. But that cannot be at the cost of the business community. The importance of a healthy mind in a healthy body and the power of mind over the body to achieve results have been proved scientifically. It is the inevitable necessity to understand the impact of bank finance affecting the human health and its consequences.

The impact of classification of account as non-performing asset and its consequences on the business performance, human sustenance and its overall collateral damages it causes on the economy and GDP of the nation should be considered and studied holistically to prevent such catastrophe from happening. The moment an account is classified as NPA (No-Performing Asset), the fund flow of the enterprise comes to end even though there is no constraint and restrain imposed by RBI or any other controlling authority to fund such enterprise or raise funds. It is the mid-set that the banks and financial institutions have developed that once NPA, it is always NPA and it is not viable. No debit transactions including interest are allowed after classification of account as NPA and any credit remittances come to the account are adjusted towards recovery of interest and installments leaving the enterprise with no working funds affecting the cash flow which is vital for the survival.

Besides, the rating by credit rating agency and the dependence of banks and financial institutions on such ratings also are contributory factors to create financial crisis among the business entities. Credit rating does not take into consideration the business and market environments particularly under a situation arising out of the global pandemic onslaught. Mostly it is based on the current financial status of the concerned person / entity which need not necessarily reflect the factual position. The financial status and the rating on it can drastically change from very positive to dangerously negative as has happened under the global pandemic crisis because of the circumstances beyond anybody's control. Any remedial measures undertaken and to be undertaken by government, RBI and implemented by the banks and financial institutions, if it is to be effective, should have been made based on the realities of the business and market assuring adequate cash flow to meet the financial commitments and market demands. If it is not so, then any remedial measures taken will become redundant. This is the reality which is being faced today.

The recovery of debts with human touch is based on the fact that it takes considerable time to build and it takes no time to destroy. Considering the roles of the banks and the business in the creation of national wealth, it becomes incumbent on them not to jeopardize the interest of the lender and the borrower but to act in unison for the welfare of both and helping to create national wealth and augment their respective contribution towards GDP. Besides, the human tragedy by suicide should not be on account of infringement into the fundamental rights and human rights by the banks and financial institutions.


Category Others, Other Articles by - T.R.Radhakrishnan