The story of Air India's Flight of Full Circle


October 8, 2021 is a memorable day for the 153 year old TATA conglomerate for having reclaimed their pioneer venture under took by its doyen of Indian aviation the revered and popularly known ‘JRD TATA' who put India on the commercial aviation map when he first piloted a the ‘Havilland Puss Moth monoplane from Karachi to Mumbai's Juhu aerodrome on October 15, 1932 giving birth to TATA Airlines which later became AIR India in the year 1946. After 68 years of its days of glory under TATA umbrella and the severe turbulent periods under government control, it completed its full circle and back to its original fold of TATA brand.

The Government of India passed the Air Corporations Act in the year 1953 and purchased a majority stake in the carrier from Tata Sons and its founder J. R. D. Tata was chosen to continue as Chairman till 1977. The company was renamed as Air India International Limited and the domestic services were transferred to Indian Airlines as a part of a restructuring. 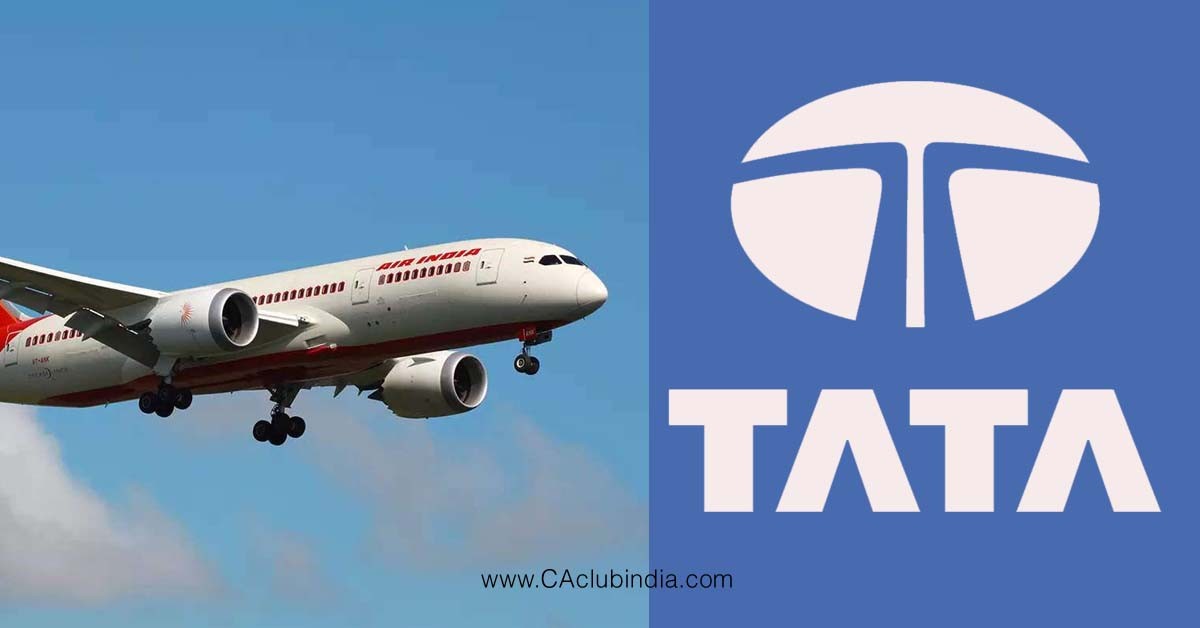 "My friend Nehru stabbed me in my back. I can only deplore that so vital a step was taken without giving us a proper hearing," JRD Tata said to have lamented on the nationalization of AIR INDIA. Ever since its nationalization of AIR INDIA in the year 1953, the journey of AIR INDIA started with its flights under the stewardship of JRD and was doing fairly well becoming an iconic airlines in the world of civil aviation till the time JRD's tutelage. It was during his time that Air-India was raised to the international level and indeed to the top of the list. But unfortunately on February 1, 1978, the then-Morarji Desai government removed Chairman JRD Tata from the boards of Air India and Indian Airlines. He was later reinstated on the boards of both airlines in April 1980 by Indira Gandhi. However, it must be noted that he did not return as chairman but he was associated with it till 1986.

But slowly the deterioration started in the fortunes of AIR INDIA since the year 2000. It started facing turbulent weather conditions since then. In 2000- 01, attempts were made to re-privatize Air India. In May 2004, Air India launched a wholly owned low cost subsidiary called Air-India Express connecting cities in India with the Middle East and Southeast Asia. In 2007, Air India and Indian Airlines were merged under Air India Limited. The airline was invited to be a part of the Star Alliance in 2007.

Since 2007 the losses were amounting on account of faulty decisions, lack of effective management, corruption and incompetence of the then political disposition and bureaucratic indulgence. A report in the Business to-day.in, New Delhi, April 06, 2012, stated, "Cash-strapped Air India (AI) has been losing millions of dollars due to corruption and mismanagement in the outsourcing of repairs to overseas vendors by its engineering department. The government-owned airline has been made to shell out huge sums of money for repair of aircraft engines as the engineering department has failed to push through warranty claims properly and, at times, deliberately delayed follow-up action to allow the warranty period to expire."

As per a report, AIR INDIA's accumulated losses touched Rs 13,000 crores as on March 31, 2010, while borrowing was as high as Rs 46,000 crores. The airlines was very close to defaulting on its loan in the end of July 2010 when the government stepped in to infuse capital. "If the company were to be classified as an NPA, it would be a significant blow to our rated banks as they have lent up to 15% of their core tier-1 capital to AI," a company statement said.

A review of various events and statistics show, "The combined losses for Air India and Indian Airlines in 2006- 07 were ₹7.7 billion (US$110 million) and after the merger, it went up to ₹72 billion (US$1.0 billion) by March 2009. In July 2009, State Bank of India was appointed to prepare a road map for the recovery of the airline. The carrier sold three Airbus A300 and one Boeing 747-300M in March 2009 for $18.75 million to finance the debt. By March 2011, Air India had accumulated a debt of ₹426 billion (US$6.0 billion) and an operating loss of ₹220 billion (US$3.1 billion), and was seeking ₹429 billion (US$6.0 billion) from the government. A report by the Comptroller and Auditor General blamed the decision to buy 111 new aircraft and the ill-timed merger with Indian Airlines for the poor financial situation. In August 2011, the invitation to join Star Alliance was suspended as a result of its failure to meet the minimum standards for the membership. The government pumped ₹32 billion (US$450 million) into Air India in March 2012."

But the most unfortunate part is that those who were responsible for AIR INDIA's loot and its degradation were allowed to go with impunity and the successive governments were funding the losses through capitalisation of the airline out of public money at the cost of national exchequer. Lack of political will and political expediency prevented the privatisation or denationalization of the perennially ailing national carrier.

On 28 June 2017, the Government of India approved the privatisation of Air India which had by then became a politically sensitive issue. The present government took a courageous political and prudent decision to sell 100% share of the airline to prevent further exploitation and deterioration of the national carrier and started its preparation in late-2019 which culminated in the sale of AIR INDIA. The sum total of the financial deal is that the offer of Rs. 18000 crores for the bleeding national carrier offered by TALACE Private Limited, a subsidiary of TATA Sons which includes debt of Rs.15300 crores take over by them along with cash payment of Rs. 2700 crores was approved and settled by the government. The remaining debt of Rs. 61562 crores would be borne by the government. TATA's bid was the highest among the participant bidders.

Political rumblings have already started for the sale of the Rs. 84000 crores debt ridden and Rs. 20 crores daily loss making AIR INDIA to yet another leading private sector conglomerate of the TATA at a throw away price and taking over the burden of a huge debt of Rs.61562 crores to be borne by the government. It is worth mentioning that a decade ago Kapil Kaul, chief executive for the Indian subcontinent and Middle East at the Centre for Asia Pacific Aviation (CAPA) said, "Fundamentally, Air India has reached a dead end," and "From a business case standpoint it should have ceased to operate a few years back had it been a private company." The airline's former chief operating officer, Gustav Baldauf, an Austrian, quit his post in less than a year into the job after he gave a newspaper interview in which he was quoted as speaking out against government interference in Air India's day-to-day operations.

"Privatisation or denationalisation will not be politically acceptable. The politics of the day will not allow it," said D.H. Pai Panandikar, president of the research group RPG Foundation. "They are overstaffed and it is very difficult to correct that situation unless they come out with bold policies, but that the government would not want to do," he said.

Finally the position of sustenance of AIR INDIA was summarized as under.

"Air India, a relic of state ownership threatened by losses, bloated costs and more nimble rivals, needs to secure a massive debt and operational overhaul if it is to survive in a market growing at 20 percent a year."

"It is almost unavoidable to privatise Air India or at least rope in a private enterprise even if the government remains a stakeholder," said Hikmat Mahawat Khan, a Netherlands-based consultant at the Center of Excellence Aviation of Capgemini Consulting. "Its current form is not sustainable in future."

It is to the credit of the present government which they deserve richly for taking a pragmatic, practical and determined final decision based on financial and economic considerations to take precedence over political expediency in the sale of incorrigible AIR INDIA placing the economic interest of the nation beyond political repercussions. To conclude "It is better late than never" and "All is well that ends well".


Category Others, Other Articles by - T.R.Radhakrishnan