Penalty for failure to get accounts Audited - Section 271B


If the assessee fails to get his accounts audited or furnish a report of such audit u/s 44AB,

• No penalty shall be imposed u/s 271B if the assessee proves that there was reasonable cause for such failure. [Section273B] 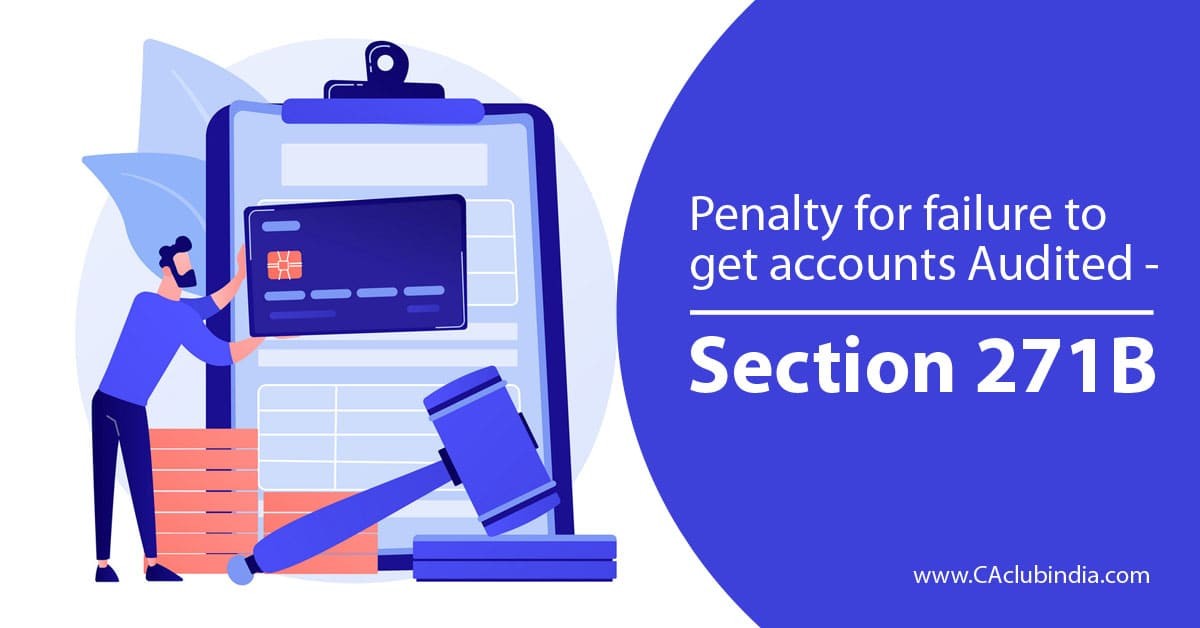 a. Resignation of tax auditor and consequent delay;
b. Bonafide interpretation of the turnover based on expert advice;
c. Death or physical inability of the partner in charge of the account
d. Labor problems such as strike, lock-out for a long period, etc;
e. Loss of accounts because of fire, theft, etc., beyond the control of the assessee;
f. Non-availability of accounts on account of seizure;
g. Natural calamities, commotion, etc.

• Held that no penalty is imposable u/s 271B for non-compliance with the provisions of Sec. 44AB on the ground that the returns were filed belatedly. The penalty is leviable only if the assessee fails to get his accounts audited and obtain a report. CIT v. Apex Laboratories Pvt. Ltd. [2010] 320 ITR 498(Mad)

• For purpose of Sec. 44AB turnover of all businesses carried on by the assessee has to be considered but provisions of Sec.271B can be applied only in respect of that business, accounts of which have not been audited and not in respect of accounts which have been audited. Asst. CIT v. Smt. Bharti Sharma [2011] 44 SOT 230 (Del.)

• Where assessee, an advertising agent, was under bona fide belief that commission income earned by him was not in excess of limits prescribed under section 44AB and, thus, he was not required to get books of account audited, impugned penalty order passed under section 271B deserved to be set aside. Manoj S. Gugale vs. ITO [2017] 80 taxmann.com 193 (Pune – Trib.). Also, see Off-shore India Ltd. Vs. DCIT [2017] 167 ITD 0635 (Kol.-Trib.)

• ITAT Lucknow has held that penalty under section 271B for failure to get accounts audited and furnish tax audit report u/s 44AB cannot be levied simultaneously along with penalty u/s271A.

These appeals are preferred by the assessee against the consolidated order of the ld. CIT(A) on a common ground that the ld. CIT(A) has erred in confirming the penalty levied under section 271B of the Income-tax Act, 1961 (hereinafter called in short - the Act"). During the course of hearing of the appeals, the ld. counsel for the assessee has invited our attention that the Assessing Officer initiated penalty proceedings under section 271A and 271B of the Act.

Since the Assessing Officer has levied penalty under section 271A of the Act, the penalty under section 271B of the Act cannot be levied on account of non-auditing of the accounts. In support of his contention, the ld. counsel for the assessee has placed reliance upon the judgment of the jurisdictional High Court in the case of CIT vs. Bisauli Tractors, [2007] 165 Taxman 1 (All).

With this direction, we restore the matter to the file of the Assessing Officer. Accordingly, the appeals of the assessee are allowed for statistical purposes.