Section 224A: Auditor not to be appointed except with the approval of the Company by Special resolution in certain cases.

Section 233A: Power of Central Govt. to direct Special Audit in certain cases 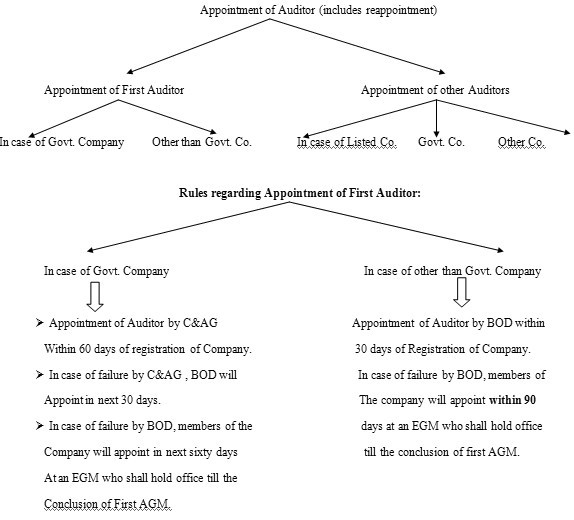 Rules regarding Appointment of Other Auditor:

It includes rules regarding rotation, reappointment and filing of casual vacancy.

a. In case of Govt. Company:

Auditor will be appointed by the C&AG within 180 days from the commencement of the Financial Year, who shall hold office till the conclusion of the AGM.

b. In case of other than Govt. Company:

Even if the auditor is appointed for 5 years, then also members of the Company should ratify such appointment at every AGM.

The manner and procedure of the appointment of the Auditor is prescribed by CG.

Notice of Appointment of Auditor should be filled with the Registrar within 15 days of the meeting in which the auditor is appointed.

2.Some other Provisions regarding re appointment of Auditor:

a.A retiring auditor may be re- appointed at an AGM, if:

i.He is not disqualified for re-appointment

ii.He has not given the company a notice in writing of his unwillingness to be re appointed

iii. A special resolution has not been passed at that meeting appointing some other auditor or providing expressly that he shall not be appointed.

3.Where at an AGM, no auditor is appointed or re-appointed, the existing auditor shall continue to be the auditor of the Company.

4.Provisions for Listed and other prescribed Company:

Already existing Company shall comply with these provisions of listed company within three years from the date of commencement of this Act.

5.In case of Casual Vacancy:

Note: In case of resignation by auditor:

Casual Vacancy to be filled by BOD within 30 days but the same should be approved by the members in a general meeting (EGM) to be convened within 3 months of the recommendation of the Board. He shall hold office till the conclusion of next AGM.