Right of appeal | An Insight

At present, most of the sales tax/value added tax enactments have a provision which requires an assessee to deposit the entire amount of tax or a substantial portion of tax, as an “admission fee” before filing appeal. An assessee can enter the office of the appellate authorities only if the “admission fee” is paid at the entrance, as otherwise, the assessee will be bodily and forcibly thrown out.

Before proceeding further, it is necessary to point out that the in (2009) 22 VST 529 (Ravi Gupta Vs. Commissioner of Sales Tax) was not considering the validity of any provision similar to section 17-D of the Kerala Act. The was laying down the principles to be followed by statutory authorities while passing orders on the stay applications and hence cannot be regarded as a binding precedent.

There can be no dispute to the proposition that the  right of appeal is a creature of statute. Without a statutory provision creating the right of appeal, the person aggrieved is not entitled to file appeal. It is open to the legislature to impose conditions for exercise of the right of appeal.  ”We fail to understand as to why the legislature while granting the right of appeal cannot impose conditions for the exercise of such right. In the absence of any special reasons there appears to be no legal or constitutional impediment to the imposition of such conditions . . . .  Such conditions merely regulate the exercise of the right of appeal so that the same is not abused by a recalcitrant party and there is no difficulty in the enforcement of the order appealed against in case the appeal is ultimately dismissed. It is open to the legislature to impose an accompanying liability upon a party upon whom a legal right is conferred or to prescribe conditions for the exercise of the right. Any requirement for the discharge of that liability or the fulfillment of that condition in case the party concerned seeks to avail of the said right is a valid piece of legislation and we can discern no contravention of article 14 in it” – AIR 1975 SC 1234 (The Anant Mills Co. Ltd. Vs. The Muncipal Corporation of City of ) (A decision rendered by a bench of 4 Judges).

This principle was once again stated by the in AIR 1980 SC 2097 (Nand Lal and another Vs. State of )(A decision rendered by a bench of 5 Judges). The had held at para 19 of the report as follows:

“It is well settled by several decisions of this Court that the right of appeal is a creature of a statute and there is no reason why the legislature while granting the right cannot impose conditions for the exercise of such right so long as the conditions are not onerous as to amount to unreasonable restrictions rendering the right almost illusory”.

In AIR 1988 SC 2010 (Vijay Prakash D. Mehta Vs. Collector of Customs [Preventive], Bombay), the Apex Court, while construing section 129A and 129E of the Customs Act, held that the right of appeal is neither an absolute nor an ingredient of natural justice the principles of which must be followed in all judicial and quasi-judicial adjudications. The right to appeal is a statutory right and it can be circumscribed by the conditions in the grant. It is important to note that under section 129E of the Customs Act, the Commissioner (Appeals) and the Tribunal had been specifically granted the power to dispense with the payment of predeposit pending appeal.

In AIR 1992 SC 2279 (Shyam Kishore and others Vs. Municipal Corporation of Delhi), the court specifically held that the Apex Court in AIR 1975 SC 1234 and AIR 1988 SC 2010 had no occasion to consider what the position would be if the conditions placed on the right of appeal  were unduly onerous or such as to render the right of appeal totally illusory.  The principles stated in AIR 1980 SC 2097 was applied and kept in mind by the Apex Court while considering the validity of section 17(2) of the Securitisation and Reconstruction of Financial Assets and Enforcement of Security Interest Act, 2002 in 2004 (2) CTC 759 (Mardia Chemicals Ltd. Vs. Union of India).

In AIR 1999 SC 1818 (Gujarat Agro Industries Co. Ltd., Vs. The Muncipal Corporation of the city of Ahmedabad), the Apex Court, while laying down the general principle regarding the right of appeal, did not consider either the decision of the Apex Court in Nandlal’s case or the question whether the conditions are reasonable or not.  The court simply held at para 10 that “any challenge to its constitutional validity on the ground that onerous conditions have been imposed and right to appeal has become illusory must be negatived”. The principle stated by a bench of 5 Judges has not been considered or applied by the bench of 2 Judges.

In (1954) 5 STC 115 (Himmatlal Harilal Mehta Vs. The State of Madhya Pradesh),  the court was considering the vires of Explanation II to section 2(g) of C.P. and Berar Sales Tax Act, 1947. One of the contentions raised was that writ was not maintainable in view of availability of alternative remedy. The court held that the remedy provided by the Act was of an onerous and burdensome character as before the appellant can avail of it, he is required to deposit the whole amount of tax. Identical principles has been stated in (1953) 4 STC 114 (Hoosein Kasam Dada [] limited Vs. The State of ).

The Kerala High Court referred to a decision of the Supreme Court reported in (2008) 4 SCC 720 (Government of Andhra Pradesh Vs. Smt. Laxmi Devi). The was considering the validity of section 47A of the Indian Stamp Act as amended by A.P.Act 8/98 which required the payment of 50% of the deficit stamp fees as a condition precedent for a reference to the Collector. The High Court had declared the provision to the unconstitutional. The decision of the High Court was reversed by the . The Court held that the provision was aimed at plugging the loopholes for quick realization of stamp duty. The Court referred to the decisions reported in AIR 1999 SC 1818 (Gujarat Agro Industries Co. Ltd., Vs. The Muncipal Corporation of the city of ), AIR 1988 SC 2010 (Vijay Prakash D. Mehta Vs. Collector of Customs [Preventive], ) and AIR 1975 SC 1234 (The Anant Mills Co. Ltd. Vs. The Muncipal Corporation of City of ) but not the decision of the Court rendered by a bench of 5 judges in AIR 1980 SC 2097 (Nand Lal and another Vs. State of . With respect, the court did not consider the question whether the conditions imposed for exercising the right of appeal/reference was reasonable or not. Of course, the Court held that the assessee can also file a writ petition under article 226 of the Constitution of India challenging the demand if the same was arbitrary.

In (2000) 119 STC 138 (D.V.C.Bukaru Cooperative Stores Limited Vs. State of Bihar), the Patna High Court upheld the validity of section 45(3) of the Bihar Finance Act, 1981, which required the assessee to pay 20% of the assessed tax before admission of appeal as such an amount was not exorbitant and does not impose any onerous or unreasonable condition on the right of appeal. In (2001) 122 STC 382 (Emerald International Limited Vs. State of Punjab), the Full Bench of the Punjab and Haryana High Court was considering the validity of provision which required the assessee to pay the entire amount of assessed tax but, however, the statutory authorities were given the power to dispense with the deposit. The Full Bench upheld the validity of the provisions. With respect, in the above decisions, the court did not consider whether the conditions imposed in exercising the right of appeal was onerous or not.

A Full bench of the Madras High Court in the decision reported in (1996) 100 STC 1 (The State of Tamil Nadu Vs. E.P. Nawab Marakkadi) had taken the view that “the right of appeal is a creature of statute and it is governed by the conditions attached to it as long as those conditions are reasonable and valid. There was a provision in the TNGST Act, namely, section 36(1) which required the dealer to pay the balance of taxes if he failed before the first appellate authority. While considering the validity of the said provision, the court, in W.A.No. 931, 932 of 2009 dated 11.8.10 (K.M. Corporation, Manaparai and another Vs. The State of and others), held as follows:

“The validity of the Act was considered in extenso by the Sales tax Appellate Tribunal. It was only subsequently, the Act was repealed. It is true that in the new Act (Tamil Nadu Value Added Tax Act, 2006), there is a saving clause with respect to the pending proceedings. However, cases relating to the period prior to the new Act being less in number and in view of the pronouncement of the Sales Tax Appellate Tribunal in Hugs Advertising case (2000) 119 STC 591 as approved by this Court in the judgment cited supra in W.A.Nos. 601 and 632 of 2006, we are not inclined to consider the same  issue once again”.

With great respect to the Honourable Court, the Tamil Nadu taxation Special Tribunal did not consider the validity of the provision in (2000) 119 STC 591. The following observations of the Special Taxation Tribunal will make the picture clear:

“Therefore, the one and only issue in all these petitions relates to the validity of Tamil Nadu Act 14 of 1999. Even here it has to be mentioned that at the time of arguments, no serious attempts were made to invalidate the amendment because there are a number of decisions upholding the imposition of condition of condition for entertaining appeals. The main arguments centered over the issue of retrospective operation of the Act and the transaction in respect of Act will apply”. 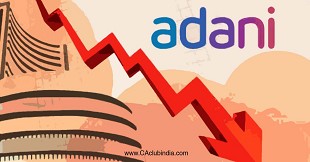 How and Why did the Adani Stocks see a downfall?