Revised Code of Ethics by ICAI


ICAI (Institute of Chartered Accountants of India) being regulator certifier educator of accountancy profession since 1949 in India has brought up new code of ethics 2019. The same was to be made effect from 1st April 2020 however made applicable from 1st July 2020 due to Covid 19. The regulator being a member of International federation of accountants (IFAC) has revised new code of ethics in accordance with international standards. This code principles are in accordance set by International ethical standard board of association (IESBA) a group of IFAC. When at the global level IFAC revised the code of ethics in 2018 ICAI also in tandem worked for revision of code of ethics. Ethics marks the hall mark of profession. Very important and essential to know ethics properly and do successful practice. Even the same applies for employment although governed by very few clauses. ICAI is governed by

Apart from the above council decisions taken from time to time.

ICAI logo- CA with a tick mark inside a rounded rectangle with white background.it was applicable from 1st July 2007 where by CA firms can use also can be used by CA in their car (at back) irrespective of full time practice or not.

CA Act 1949 consists of only two schedules. It describes about professional misconduct and other misconduct. These are as follows 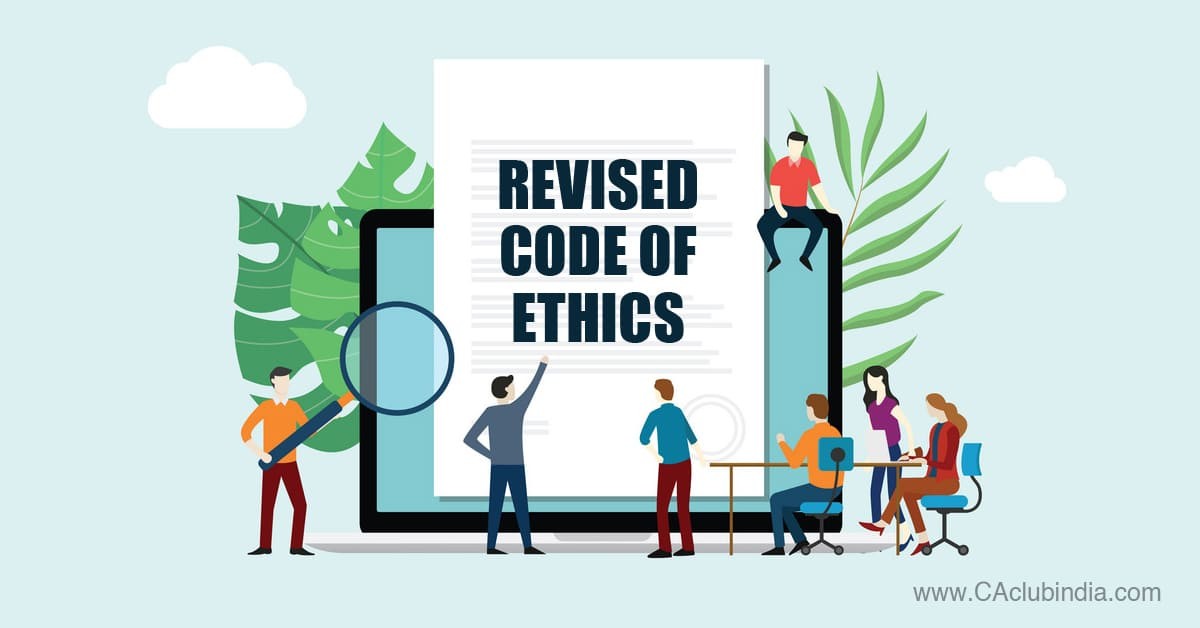 1. NOLCAR (Non compliance with other laws and regulation)

A new version introduced this is done to ensure that while Chartered accountant is appointed for any function the responsibility to ensure that management follows all laws whether or not affecting financial statements.

2. Changes in provision of taxation services to audit client

This is peculiar. A statutory auditor can undertake tax audit (44ab of income tax act and section 35 of CGSt act 2017) also take representation services at different forums and do issue certificates.

The above 3 clauses mentioned above are being deferred considering covid 19 constraints faced by members in practice.

However other provisions are suo moto applicable

A critical change taken place in Volume 1 code of ethics

As per companies act 2013 rotation of auditors became applicable for certain class of companies. However under now code of ethics even partner rotation is there in the term of period which decided by client.

Changes in volume 2 code of ethics

As against writing articles / Books / presentation under earlier code of ethics only prefix CA was allowed firm name was not to be used. Considering constraints faced by members council has revised the norms

Now either prefix CA or firm name is to be used but both cannot be used simultaneously.

Either of them can be written in cover page of book

But I strongly recommend the 1st choice irrespective of a book , article , presentation. no need of mentioning firm name. In case of jointly written both names can be written by prefix CA. (in inside page can acknowledge contribution made by CA or staff individually)

Even as regarding online presentation only file name should be with .xlsx.

As regarding educating CA students by coaching classes no advertisement can be made as per present code of ethics.

However logo of ICAI can be used in coaching class . name of coaching class can be mentioned ( not like big banner). However online website can go for coaching class describing subjects taught there in and faculty profile in brief.

A significant change has been made in part 1 schedule 1 clause 8. Earlier only through registered acknowledgement due. now considering covid 19 situations it can be done through email.

(note whatsap is not valid source)

Most of it are family disputes related. It is also noted most of them are relating to husband wife. These are true hazards of getting married to same profession. An illustration to support this

Mr X Mrs X were practicing in different name. Mrs X was doing audit of trust A. After period of tenure got over for Mrs X now Mr X became auditor. There was a need to give communication to previous auditor but as it was relationship between spouse they deemed as accepted. These are typically chaos of related party (between spouse) for which compliant was filed by the new trust.