Removal of Director Disqualification: How Important it is for One's Career


Director disqualification has been a topic of concern for every director out there. There are some questions every director wants the answer to. In this blog, some of the questions that will be dealt with are,

Removal of disqualification is important for every directors’ career as once any director is disqualified and if it is not removed then, it continues for a period of five years. Every director hope for getting his/her DIN reactivated whether the company has been revived or not.

Many changes have been seen in Companies act of 2013 as compared to the act of 1956 and one of the change is a company can have any number of the director be it full time or part-time and all of them fall under the category of “officers’. Also, one person can act as a director in many companies, so if the DIN of any director is deactivated, he would not be able to work as a director in any of the other companies also.

If a company has been disqualified by RoC it also affects the career of its directors. The directors are considered responsible for the acts of any company so the disqualification makes its director ineligible for being appointed as a director in that company or any other company for five years. The office of a director shall become vacant in that company under section 167(1)(a).

Consequences of Continuation by a Disqualified Director

If any person continues to work as a director even after the office which he held as the director has become vacant due to the non-fulfillment of provisions, then he shall be punishable for a term extending up to one year or with a fine which shall not be less than one lakh rupees but may extend up to five lakh rupees or both.

Actions to be Taken by Companies on Disqualification

The company is required to file e-form DIR-12 with RoC. Company shall appoint new directors in case the number of directors gets below the minimum limit. A board meeting shall be held to inform all the board members about the disqualification of such director.

An entry in the register of members shall be made about the disqualification or vacation of the director.

Under section 166 if any director fails to file DIR-12 they shall be punished with fine as it is the duty of directors of the company to comply with the provisions of the act. The fine shall not be less than one lakh rupees and may not extend to five lakh rupees.

A director can appeal to National Company Law Tribunal (NCLT). One can ask for a temporary stay order, once the appeal is initiated any disqualified director gets seven days to continue working as a director. And if within this period of seven days he submits the annual reports of the company a stay order can be put on the disqualification of the company. Though, under the Companies Act 2013, an order passed for disqualification of a director does not take effect within the next 30 days.

Around 3.09 lakh directors had been disqualified by MCA under the regulations of section 164(2) and 167(1)(a) of the act. DIN of all these disqualified directors was deactivated by the RoC. As there was no such solution to this problem, directors started searching for one. And as a result of this ministry came out with a scheme which provided these directors a chance to file the necessary documents and save their position and that scheme was called “Condonation of Delay Scheme”. 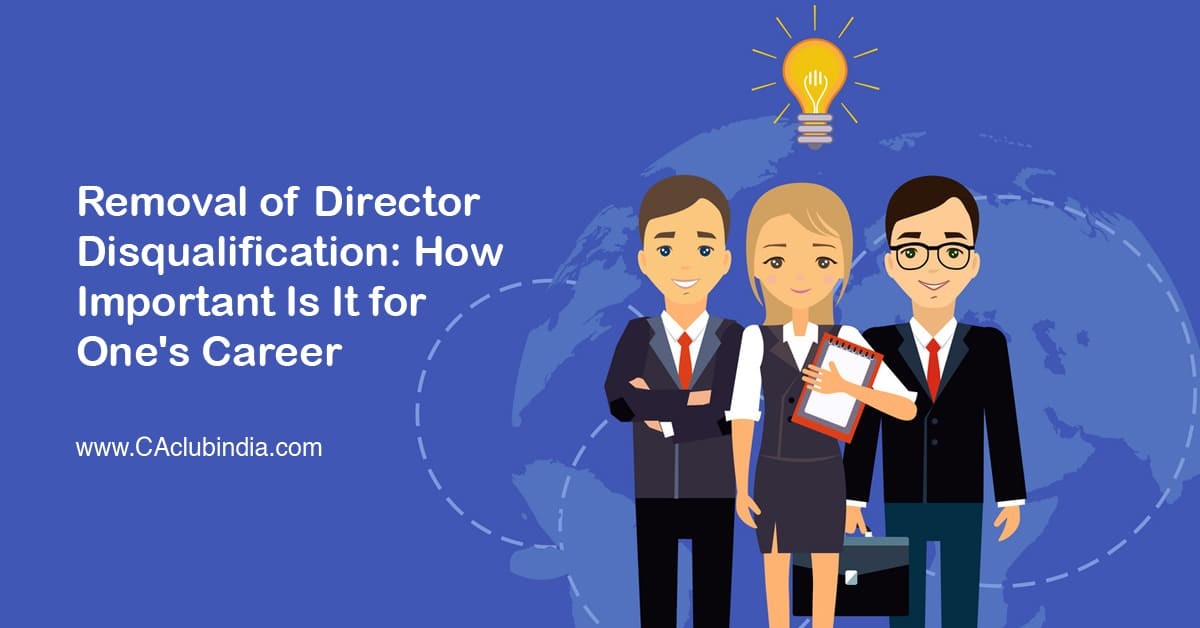 Under section 8 of the act, every registered company is required to provide financial statements or an annual return of the company for 3 consecutive years to the RoC and if any company fails to do so he will be labelled as “strike off” from active company and director will be disqualified. So, the government launched CODS from 1st Jan to 30th April and under this scheme all the required documents can be filed and temporary activation of DIN would take place under this scheme.

Directors who failed to take the benefit of CODS were disqualified for five years so MCA launched another scheme this year starting from 01-04-2020. Directors who were at default were permitted to file documents which they failed to pay on any given date. This scheme gave another opportunity to the struck off companies.

Court’s View on Deactivation of DIN

Highlights of the case

It was specified in the case that rule 9 and 10 deals with the application for allotment of DIN and according to Rule 10(6) once a DIN is allotted it is valid for the lifetime and can’t be re-allotted to any other person. Rule 11 talks about cancellation or surrender or deactivation of DIN and after the examination of Rule 11 neither cancellation nor deactivation is provided upon disqualification under Section 164(2) of Companies act 2013. It is also to understand that without DIN one cannot submit financial statements or annual returns. As AQD Rules do not empower the RoC to deactivate DIN apart from such disqualification, it is also contrary to section 164(2) read with section 167(1)  as the person concerned may continue to be a defaulting company’s director.

Judgement of the Case

By setting aside the impugned order dated 27.01.2020, these appeals are allowed and as a consequence of it, the publication of the list of disqualified directors and the appellants of deactivation of DIN by the RoC is hereby quashed. Within the 30 days of the date of receipt of a copy of this order, the DIN of the respective directors shall be reactivated.

With the help of the above case, it is very clear to understand the importance of legal help and that judiciary acts in the favour of directors if right justifications are given for the defaults. Now let us understand how we can get rid of disqualification and in what ways the company can be revived?

So, one of the remedies is similar to this that is applying to NCLT for relief. This remedy is basically for directors who want their company revived along with their disqualification removed. And another remedy available out there is filing a writ petition, this remedy is for directors who only want their disqualification to be removed. Let’s discuss both the remedies in detail:

Applying to NCLT: Companies which get disqualified due to default in the submission of documents can apply to National Companies Law Tribunal to get the revival order for their company and once the NCLT has approved for the revival of the company, directors can also apply for the reactivation of their DIN and removal of directors’ disqualification.

a. Drafting of writ petition:

b. This drafted application along with affidavits are required to be filed in High Court.
c. An advocate needs to appear in court.
d. Obtaining the final order of the High Court.
e. If the order is in favour of petitioner then on requires filing the same to the RoC.

Facts that are in Favour of Directors

Since 2017, in many cases, High Courts are of opinion that the related provisions of the Companies Act are ambiguous and lack clarity. Many factors have been raised by learned advocates that need clarity by MCA. Some of those factors are;


Category Career, Other Articles by - Shweta

Payment of Gratuity and Exemption from Tax

How to Overcome the Fear of Failure in Exams?