Introduction:  The Ministry of Finance had come out with General Anti Avoidance Agreement (GAAR) in this buget. But due to its opposition from many quarters especially the FII’s(Foreign Institutional Investors), Government formed a expert Committee to look in to the GAAR & make some changes to it. The Committee was headed by Dr Parthasarthi Shome. They reviewed the GAAR provisions & came up with suitable suggestions. The Government has incorporated the changes & has issued the new GAAR regulations.  Here are some of the changes which are accepted by Government

GAAR is an advanced instrument of tax administration where an entity is taxed if he has made an arrangement of transaction mainly to avoid tax. Some assesses structure a transaction in such a way that maximum tax benefit is available using the existing tax law. Some of these result in Tax mitigation which is permitted. Some are artificial arrangement which result in Tax avoidance. So there must be a distinction between tax avoidance & Tax mitigation. GAAR is invoked if there is such an arrangement made specifically to avoid tax & not to mitigate tax.

GAAR is to be applied only if cases of abusive, Contrived & artificial arrangements. Arrangement is said to be impermissible if the main purpose is to obtain tax benefit & results in misuse of provisions of law, lacks commercial substance or is not entered for bonafide purposes.

Some examples of arrangements lacking commercial substance are:

1. the substance or effect of the arrangements a whole,  is inconsistent with, or differs significantly from, the form of its individual steps or a part; or

c. Elements that have effect of offsetting or cancelling each other

d. A  transaction  which  is  conducted  through  one  or  more  persons and disguises the value, location, source, ownership or control of funds which is the subject matter of such transaction

3. it  involves  the  location  of  an  asset  or  of  a  transaction  or  of  the place  of  residence  of  any  party  which  is  without  any  substantial  commercial  purpose  other  than  obtaining  a  tax  benefit  (but  for  the provisions of this Chapter) for a party.

Some of the examples of Tax mitigation are the following:

(i) Selection of one of the options offered in law.

(b) setting up of a branch or subsidiary

(d) funding through debt or equity

(f) purchase or lease of a capital asset

(ii) Timing of a transaction, for instance, sale of property  in loss while having profit in other transactions.

(iii)  Amalgamations  and  demergers (as defined  in  the  Act) as approved by the High Court.

(iv)  Intra-group  transactions (i.e.  transactions  between  associated persons  or enterprises)  which  may  result  in  tax  benefit  to  one

If GAAR is evoked then the assessee may be denied of  tax benefit or a benefit under a tax treaty.

Some of the major changes made to GAAR on the recommendations of Shome Committee are as follows.

4. Where SAAR (Specific Anti Avoidance Agreement) is applicable then GAAR will not be evoked.

5. If an FII chooses not to avail the benefit of agreement u/s 90 & 90A & subjects himself to the domestic Tax laws , then the GAAR provision will not be applicable to such FII.

7. The assessing  officer will  be  required  to  issue  a  show  cause notice, containing reasons, to the assessee before invoking the provisions of Chapter X-A. The assessee shall have an opportunity to prove that the arrangement is not an impermissible avoidance arrangement.

8. The  tax  audit  report  may  be  amended  to  include  reporting  of  tax avoidance schemes above a specific threshold of tax benefit of Rs. 3 crores or above.

9. The following statutory forms need to be prescribed:-

a. For the Assessing Officer to make a reference to the Commissioner u/s 144BA(1) (Annexe-8)

b. For the Commissioner to make a reference to the Approving Panel u/s 144BA(4) (Annexe-9)

c. For the Commissioner to return the reference to the Assessing Officer u/s 144BA(5) (Annexe-10) 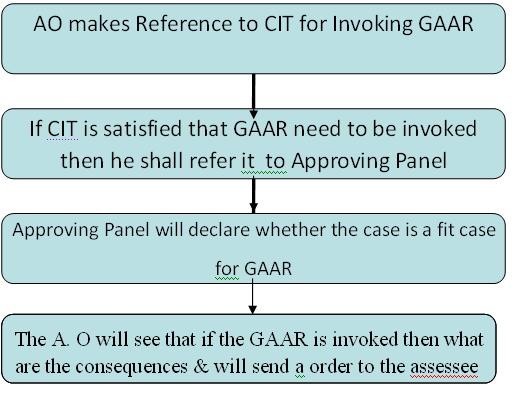 The Approving Panel shall consist of:

i. A Chairperson who is  or has  been  a  Judge of a High Court;

ii. One  Member of the  Indian Revenue Service not below the  rank  of  Chief  Commissioner  of  Income-tax;  and  one  Member  who  shall  be  an  academic  or  scholar  having  special  knowledge  of  matters  such  as  direct  taxes, business  accounts  and  international  trade  practices.

A decision of the AP should occur by a majority of members.

Conclusion: The Government has given some major reliefs to the FII’s who are investing in India by giving deferring the GAAR to 2016. This has led to rise in sensex to 20,000 mark, hope this ride wont stop & India continues to attract these FIIs