Consequent to the enactment of Companies Act, 2013, Securities and Exchange Board of India (SEBI) has announced some amendments in the listing agreement vide its Circular Number CIR/CFD/POLICY CELL/2/2014 dated 17th April, 2014.

In this article we have given a highlight of the changes made in the listing agreement vide the above SEBI circular and their impact on listed entities.

HIGHLIGHTS OF AMENDMENTS MADE IN CLAUSE 35B 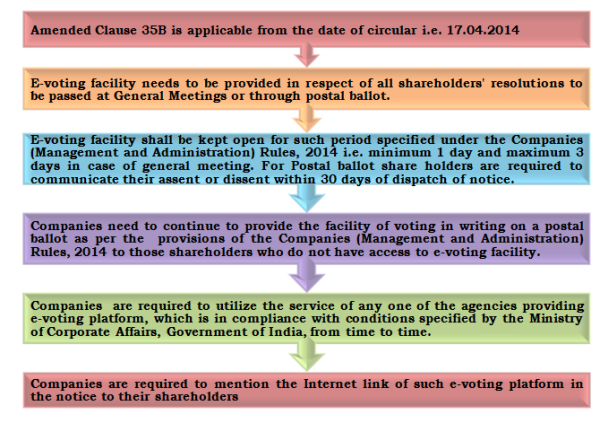 HIGHLIGHTS OF AMENDMENTS MADE IN CLAUSE 49

• The revised Clause 49 would be applicable to all listed companies with effect from October 01, 2014.

• The provisions of Clause 49(VI)(C) shall be applicable to top 100 listed companies by market capitalisation as at the end of the immediate previous financial year.

• The provisions of Clause 49(VII) shall be applicable to all prospective transactions. All existing material related party contracts or arrangements as on the date of this circular which are likely to continue beyond March 31, 2015 shall be placed for approval of the shareholders in the first General Meeting subsequent to October 01, 2014. However, a company may choose to get such contracts approved by the shareholders even before October 01, 2014.

The revised clause 49 is divided into 11 parts as depicted below.

Important Changes at a glance

As stated above, clause 49 lays down its provisions under 11 broad headings. The highlights of each of these headings are given below.

The objectives of principles reflect the purpose which is sought to be achieved by means of compliance of the provisions stated in the Clause 49. In case of any ambiguity, the provisions shall be interpreted and applied in alignment with these principles. These principles are further sub-divided into four sub-headings as given below:

• The Rights of Shareholders

•  Role of stakeholders in Corporate Governance

•  Responsibilities of the Board

a. The composition of the Board should provide for at least one women director.

b.  Independent director  - Changes made in qualification requirements

Person who neither himself nor any of his relatives —

(a)  (i) holds or has held the position of a key managerial personnel or is or has been employee of the company or its holding, subsidiary or associate company in any of the three financial years immediately preceding the financial year in which he is proposed to be appointed;

(ii) is or has been an employee or proprietor or a partner, in any of the three financial years immediately preceding the financial year in which he is proposed to be appointed, of —

(B) any legal or a consulting firm that has or had any transaction with the company, its holding, subsidiary or associate company amounting to ten per cent or more of the gross turnover of such firm;

(b)  is a Chief Executive or director, by whatever name called, of any non-profit organization that receives twenty-five per cent or more of its receipts from the company, any of its promoters, directors or its holding, subsidiary or associate company or that holds two percent or more of the total voting power of the company

• A person shall not serve as an independent director in more than seven listed companies.

• A person who has already served as an independent director for five years or more in a company as on October 1, 2014 shall be eligible for appointment, on completion of his present term, for one more term of up to five years only.

• The Nomination Committee shall lay down the evaluation criteria for performance evaluation of independent directors and the same to be laid down in annual report.

The company shall establish a vigil mechanism for directors and employees to report concerns about unethical behaviour, actual or suspected fraud or violation of the company’s code of conduct or ethics policy.

Role of Audit Committee has been enhanced by specifying new roles like approval of any subsequent modification of transactions of the company with related parties, scrutiny of inter-corporate loans and investments, valuation of undertakings or assets of the company, wherever it is necessary, etc.

• The company shall set up a nomination and remuneration committee which shall comprise at least three directors, all of whom shall be non-executive directors and at least half shall be independent. Chairman of the committee shall be an independent director.

• Role of committee has been specified.

Additional provisions specified in relation to subsidiary companies like no company shall dispose of shares in its material subsidiary which would reduce its shareholding (either on its own or together with other subsidiaries) to less than 50% or cease the exercise of control over the subsidiary without passing a special resolution in its General Meeting; selling, disposing and leasing of assets amounting to more than twenty percent of the assets of the material subsidiary shall require prior approval of shareholders by way of special resolution, etc.

• All Related Party Transactions shall require prior approval of the Audit Committee.

• All material Related Party Transactions shall require approval of the shareholders through special resolution and the related parties shall abstain from voting on such resolutions.

• Disclosure of resignation of directors

• Disclosure of formal letter of appointment