This notification shall come into effect on the 1st day of July, 2012. It deals with the export of goods.

(a)  The rebate shall be granted by way of refund of service tax paid on the specified services.

Explanation. — For the purposes of this notification,-

(i)  In the case of excisable goods, taxable services that have been used beyond the place of removal, for the export of said goods;

(d) No CENVAT credit of service tax paid on the specified services used for export of goods has been taken under the CENVAT Credit Rules, 2004;

(e) The rebate shall not be claimed by a unit or developer of a Special Economic Zone;

(2) The rebate shall be claimed in the following manner, namely:-

(b)  Exporter who is not so registered under the provisions referred to in clause (a), shall register his service tax code number and bank account number with the customs;

(c) This clause refer to  process of obtaining Service Tax Code by filling a declaration in Form A-2 to AC/Dy. Comm of Central Excise.

(d) The exporter shall make a declaration in the electronic shipping bill or bill of export, as the case may be, while presenting the same to the proper officer of customs, to the effect that—

(i)  The rebate of service tax paid on the specified services is claimed as a percentage of the declared Free On Board (FOB) value of the said goods, on the basis of rate specified in the Schedule;

(iii)  Conditions of the notification have been fulfilled;

(e) Rebate under this notification shall be calculated by applying the rate prescribed for goods of a class / description, as a percentage of the FOB value of the said goods.

(f) Amount so calculated will be deposited in the bank account of the exporter.

(h) Where the rebate involved in a shipping bill or bill of export is less than rupees fifty, the same shall not be allowed;

Rebate may be claimed in the following manner:- 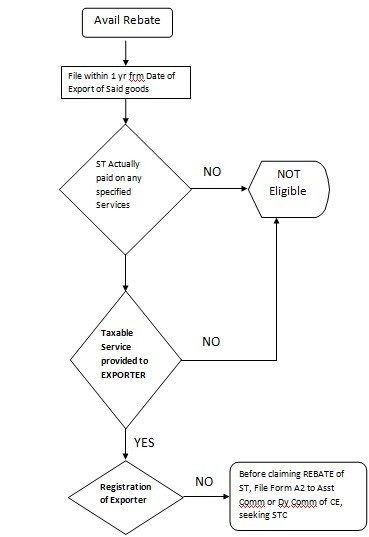 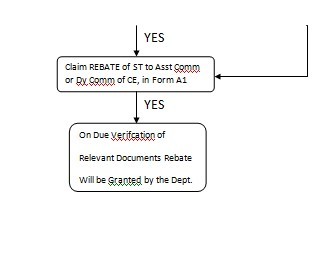