May 26, 2014 was a watershed moment in the history of Indian politics. The Macroeconomic scenario, for few years leading into 2014, was downcast with inflation running high, government having a huge fiscal and current account deficit and the GDP staying at sub-5%. Riding on the anti-incumbency factors prevalent then, BJP under the charismatic leadership of Shri Narendra Modi ji swept to power at the Centre. And expectedly anticipation levels were very high among the business community for getting the ‘Indian growth story’ back on track. Thus the usual pre-budget season hype was heightened this year on account of a single question that persisted in the minds of keen observers “Will the Budget deliver?”

And deliver it did. Among the slew of measures to prep up the economy, tax rate for domestic corporates was proposed to be reduced from the current rate of 30% to 25% over the next 4 years. Swaminathan Aiyar, a reputed columnist, writing in the Economic times (dated 1st Mar, 2015), opined that the proposed reduction “was a bigger conceptual breakthrough than his (Finance Minister’s) big thrust in infrastructure, aimed at kickstarting economic growth in the country”.

Before I start analyzing the impact of this announcement on the application of AS-22 (Accounting for taxes on Income), let me briefly give a conceptual overview of Deferred tax Assets/ Liabilities. 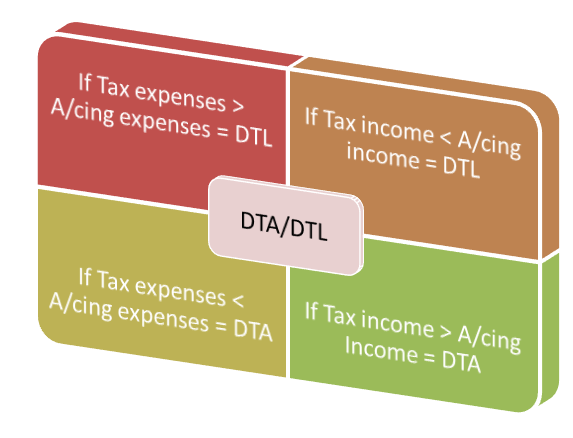 Now let us pay attention to what paragraphs 21 and 22 of AS-22 state. They are reproduced as such below.

“21. Deferred tax assets and liabilities should be measured using the tax rates and tax laws that have been enacted or substantively enacted by the balance sheet date.

In the above illustration, the corporate tax rate has been assumed to be same in each of the three years. If the rate of tax changes, it would be necessary for the enterprise to adjust the amount of deferred tax liability carried forward by applying the tax rate that has been enacted or substantively enacted by the balance sheet date.

Now let’s assume that the corporate tax rate is progressively reduced by 1% year-on-year so that the rate is as follows: Year 1-30%; Year 2-29%; Year 3-28%. The revised deferred tax calculation will be as below.

Thus we can see that the amount recorded as DTL reduces from 13.5 Lakhs to 12.75 Lakhs in the first year and in the second year the carrying amount of DTL is reduced from 9 Lakhs to 8.4 Lakhs.

The critical issue to be looked at here is whether the Honourable FM Shri Arun Jaitley’s proposal given in the budget speech ‘to reduce the rate of Corporate Tax from 30% to 25% over the next 4 years’ can be taken as having a substantive effect of enactment as mentioned in Para 22. Well, the obvious answer is no because FM’s proposal is just that … a proposal. Ultimately the tax rate may or may not reduce in the subsequent years and is dependent on whole lot of other extraneous factors like the economic condition of the nation etc.

But let’s consider the following scenario. A big MNC with multi-crore balance sheet assets has an originating deferred tax asset in the year 2014-15 and it is expected to be reversed over a period of 5 years. A difference of 5% on DTA for such companies could well run into hundreds of lakhs. Now does the following of prudent concept not entail that the corporate has to recognize the DTA (which is reversible in future years) at appropriately lower amounts (since the tax rate is likely to be @25%).

Like so many other areas in accounting, this too does not have any easy answers. Certain interesting questions that arise are:

b. Is true and fair presentation of Financial Statements affected by this?

c. Also if we have to account for the differential rates in future taxes, how do we do it? The proposed reduction is 5% over 4 years. So does it mean 1.25% reduction in tax rates per year?

Auditors of Listed Companies will be busy finalizing the accounts before the SEBI dealine of May 31st. They also need to pay attention to the issue raised in this article especially if any of them has huge DTA as on the Balance sheet date. Since AS-22 has clearly mentioned that at every balance sheet date the position must be reviewed and the carrying amount of DTA must be written off to the extent it is not reasonably certain that the amount will be recoverable.