The Count-down to the 'Union Budget 2021-22' has begun with the ceremonial 'Halwa Ceremony' on 23.1.2021. As a customary ritual, a mouth-watering sweet-dish 'Halwa' is prepared in humongous quantity in a huge 'Kadhai' and is distributed by the FM among all the office bearers of the Finance Ministry involved in the Budget making process. Interestingly, halwa ceremony also marks the beginning of about a week-long lock-down period (not caused due to corona of course) for the finance ministry officials who are directly associated with the budget-making and printing process and during this lock-down period, these officials are not even allowed to meet with their family, for ensuring the confidentiality of the budget papers, till the Budget is officially presented by the FM in the Parliament.

Last fiscal, our beloved FM has dropped the usual leather briefcase and instead has chosen to carry the Union Budget papers in a 'Red Bahikhata'. However, this year's Union Budget 2021, slated to be presented on February 1, 2021, is going to be completely paperless in the wake of the corona pandemic, as the Budget papers will not be printed and only the digital copies will be circulated.

In an unprecedented budget awareness initiative, on the occasion of the 'halwa ceremony', the Hon'ble FM Smt. Nirmala Sitharaman has also launched the “Union Budget Mobile App” for hassle-free access of Budget documents by Members of Parliament (MPs) and the general public using the simplest form of digital convenience. The mobile App facilitates complete access to 14 Union Budget documents, including the Annual Financial Statement (commonly known as Budget), Demand for Grants (DG), Finance Bill etc. as prescribed by the Constitution.

The App can be downloaded from the Union Budget Web Portal (www.indiabudget.gov.in). The Budget documents will be available on the Mobile App after the completion of the Budget Speech by the Finance Minister in Parliament on 1st February 2021.

Some Practical & Pragmatic Suggestions for the First Paperless Budget 2021-22 to bring 'Ease of Doing Business', Out of Paper, in Real Terms. 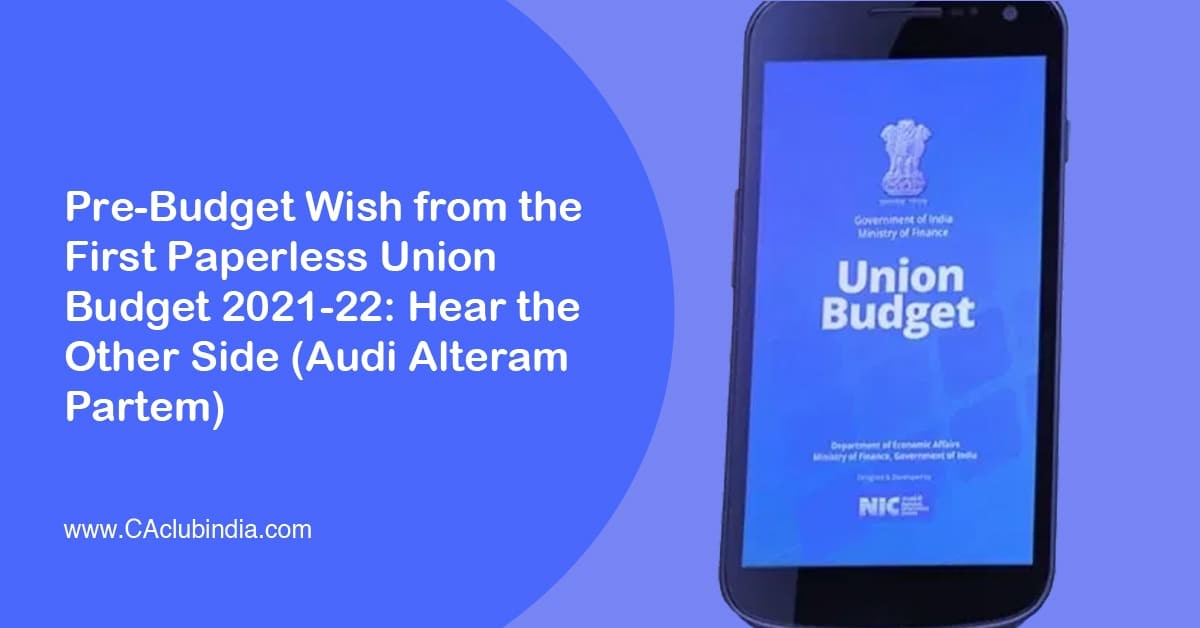 For doing justice to the herculean task of oxygenating the economy lying on the ventilator, the FM needs to put in some extra-ordinary and sincere efforts in this year's Budget.

Measures such as rationalizing the advance tax instalments mandating the payments of 25%-50%-75% instead of the existing 60%-75%-90%, an extension of similar benefits of reduced tax rates u/s 115BAA to firms and LLPs, extending the benefit of presumptive taxation u/s 44ADA to partners of firms and LLPs, can result in increased disposable income for consumption, both in the hands of individuals and corporates.

Ensuring speedy refunds by doing away with the withholding provision in section 241A can produce better results to inject liquidity in the economy than the fiscal packages. Increasing 'safe harbour limit' from the present 10% to 20% permanently in sections 50C, 43CA & 56(2)(x) can help a lot in boosting the real-estate sector.

Other procedural amendments like keeping the tax audit due date after the ITR filing due date and giving a by-default right of personal hearing via video conferencing to the assessees in all assessments, appeals and penalty cases in the new faceless regime, can help a lot in reducing probable tussles and litigations.

These basic yet effective measures can do wonders in bringing 'Ease of Doing Business' on the ground, in real terms and not just on paper.

In this Taxalogue, among all the above-suggested tax reforms/amendments, I would like to specially discuss the Doctrine of Audi Alteram Partem and its criticality and significance in the Faceless Tax Administration Regime, in detail.

Audi alteram partem (or audiatur et altera pars) is a Latin maxim or phrase meaning "no man should be condemned unheard” or “hear the other side”, and is an inherent constituent of the 'Principle of Natural Justice.'

Natural justice is the concept of common law which implies fairness, reasonableness, equality and equity. In India, the 'Principle of Natural Justice' has been given the Constitutional backing by Article 14 and Article 21 of the Constitution of India. Article 14 enshrines that every person should be treated equally. Article 21 provides that the law and procedure must be of a fair, just and reasonable kind. (Maneka Gandhi vs. The Union of India (SC).

In Indian Income Tax Laws, this Latin maxim 'Audi alteram partem' has been given an absolute recognition and our Indian counterpart to this Latin phrase is “Suitable or Reasonable Opportunity of Being Heard”.

The Hon'ble Supreme Court in the case of 'Manohar s/o Manikrao Anchule vs State of Maharashtra & Ors', has held that adjudicatory process has to be in consonance with the doctrine of audi alteram partem, i.e., no one should be condemned unheard and nemo debet esse judex in propriacausa sua, i.e. no one should be judge in his own case.

Likewise, the Apex Court in the case of Mohinder Singh Gill vs. Chief Election Commissioner has observed, “Indeed from the legendary days of Adam-and of Kautilya's Arthashashtra- the rule of law has had this stamp of natural justice, which makes it social justice. Today its application must be sustained by current legislation, case law or other Extant principle….”

The two essential ingredients of the Rule of 'Audi Alteram Partem' are (i) Notice and (ii) Hearing.

(i) Notice: In any adjudicatory proceedings including the income-tax proceedings, before drawing any adverse inference or conclusion, the affected party must be given the notice to show cause against the proposed inference or conclusion and seek his/her explanation. It is a sine qua non of the right of fair hearing. Any order passed without giving notice is against the principles of natural justice and is void ab initio.

(ii) Hearing: The second ingredient of audi alteram partam (hear the other side) rule is the rule of hearing. Any order passed by the adjudicating authority without providing the reasonable opportunity of being heard to the person affected by it adversely shall be invalid and must be set aside as has been consistently held by the Apex Court in the cases of 'Harbans Lal v. Commissioner', 'National Central Co-operative Bank v. Ajay Kumar' and 'Fateh Singh v. the State of Rajasthan'.

In all the three limbs of faceless tax administration regime, i.e. faceless assessments, faceless appeals and the faceless penalty, the assessees or their authorised representatives are not able to personally meet the concerned income tax adjudicating authority and make verbal or oral face to face representations. The only via media of interface is in an electronic manner only i.e. uploading of written replies and submissions and supporting documents and records through the e-Proccedings utility in the registered account in the e-filing portal of the income-tax department's website.

“In such a faceless regime, can restricting and confining the manner and mode of filing responses by the assessees in their tax assessments, appeals and penalty proceedings, via electronic mode only and not through a personal interface, be challenged in the appropriate legal forums and considered as against the principle of natural justice of granting of suitable and reasonable opportunity of being heard to the assessees in income-tax proceedings?”

Let us try to find the answer to this critical question in the ensuing paragraphs.

The circumstances where the request of the assessee for personal hearing via video conferencing may be approved are yet to be notified by CBDT and in order to do away with the ambiguity, a suitable clarification by the CBDT concerning the specified circumstances wherein the request of personal hearing of the assessee may be approved by the CCIT ReAC is desirable.

In the old E-Assessment Scheme, 2019, by virtue of a right vested in the scheme, the assessee was entitled to a personal hearing, by way of video conferencing/telephony, in case of disagreement with the additions/disallowances proposed in the draft assessment order, in all assessment cases.

It is pertinent to note here that the Hon'ble Madras High Court in a recent order in the case of 'Salem Sree Ramavilas Chit Company vs DCIT [2020]', has observed and stated that the faceless tax-assessment system can lead to erroneous assessment if officers are not able to understand the transactions and statement of accounts of an assessee without a personal hearing.

This burning and litigation issue of lack of suitable opportunity of being heard in the new faceless appeal scheme resulting in violation of Principle of Natural Justice and Article 14 of the Constitution of India, has become more critical in view of the admission of the writ petition of the taxpayer by the Hon'ble Delhi High Court in the case of Lakshya Buddhiraja on 16-10-2020, on this very issue.

Further, the Right of Filing Rebuttal to the objections of NeAC/AO against the admission of an additional ground of appeal & additional evidence by the appellant should be provided in Faceless Appeal Scheme, 2020.

The rule of 'audi alteram partem' or the grant of suitable/reasonable opportunity of being heard' is an essential and necessary ingredient of the 'Principle of Natural Justice'.

My learned and respected friends from the Revenue side may counter my above discussed propositions by asserting that unlike in U.S.A. and England, the Courts in India do not consider the right to an oral or personal hearing as part of the principle of audi alteram partem unless the statute under which the action is taken by the authority, expressly provides for the oral or personal hearing and the legislative requirement of the grant of a suitable opportunity of being heard may also be achieved by providing an opportunity to the affected person by making 'written representation' instead of oral or personal hearing as has been provided in the case of 'Union of India v. J.P. Mitter' (SC).

However, the question here is not about winning an argument or scoring a brownie point. The issue here is about winning the trust and confidence of the major stakeholders to whom our beloved and honourable PM Sh. Narendra Modi often refers to as 'the wealth creators' i.e. the taxpayers and the assessees.

No doubt the primary objective of the faceless tax administration is the elimination of physical interface and as such physical visits and meetings between the assessee and the assessing authority can't be allowed, and in fact, no-body should ask for it, but nonetheless that objective can still be achieved by inserting an enabling legislative provision of the grant of by-default right of personal hearing via video conferencing or telephony to the assessee, if he/she asks for it, in the faceless assessment, appeal and penalty schemes.

Believe me, the grant of half an hour opportunity of personal hearing via video conferencing to the assessee or his/her authorised representative to enable him/her to represent his/her case, is far more effective, meaningful and productive than the electronic uploading of 1000 pages written submission paper book, which the adjudicating authority may choose to read or not.

I would like to sum up the entire discussion with just one line, “Even murderers are given an opportunity of personal hearing, I am just an assessee.”

Our Dear & Beloved FM, Are You Listening?