The 'ensuing' budget is to be 'ensuring' budget in the light of sufferings gone through in the past one year or so because of COVID 19 and the government has no other approach but perforce extend captivating doles under the scope of welfare measures to alleviate the miseries of the people at large that is well understandable. Apart from this, the government shall have to take some call to spot on certain issues to correct the pressing and critical demand of time.

Different approach in direct Tax for Industry and Individuals are need of the hour specially when we are going through very bad patch inflicted by COVID 19. It is hell of a task for the government, especially for the Finance Minister confronting Budget shortly. It is really a test of as well for time.

Direct Tax approach to industry: Coming to the tax regime, it should have ‘target’ to achieve and not tentative inconfronting the impact of COVID 19; The budget should ‘accelerate’ economic growth for public good and should have ‘X’ factors to generate enthusiasm among the people at large to move forward. Coming to the Direct tax, there should be a different approach - between individuals and business income. Industrial growth is the need of the hour. Any industrial development increases production level, employment benefits, exports, infrastructural and social developments multiply and as a consequent revenue collections increase. Therefore, there is a case to have lower level of taxation if the country has to compete with other nations more so in the various manufacturing sectors in this complicated circumstances. 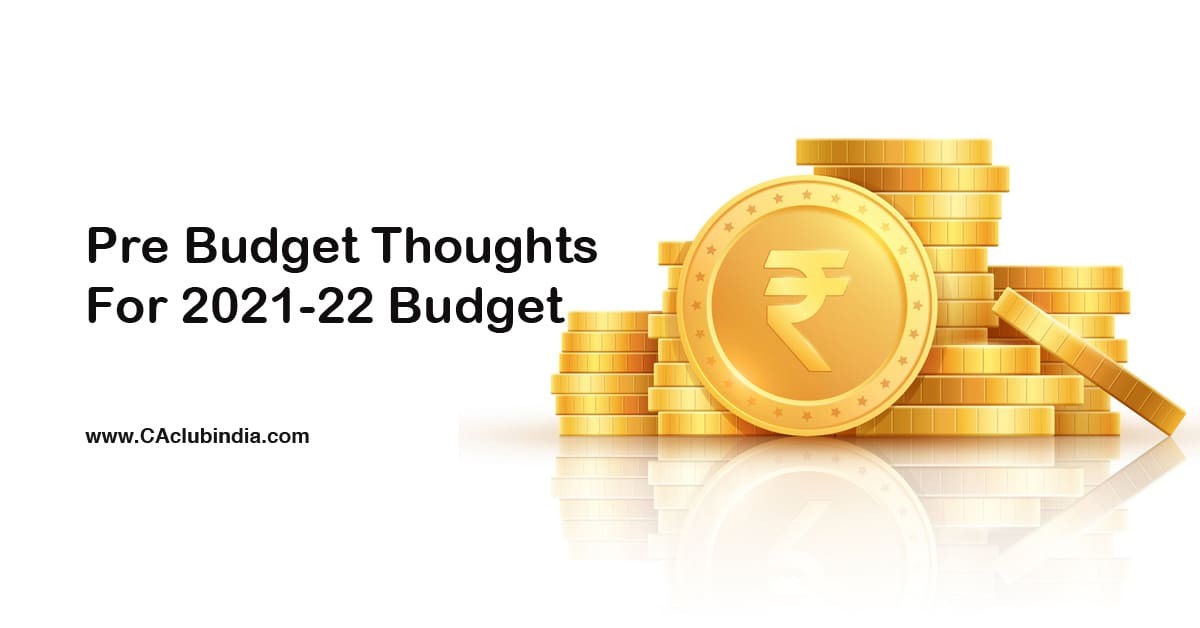 In one of my earlier articles sometime back, the author discussed the logic behind Tax Vis Duty. 'Tax' is normally taxing-burdensome, while on the other hand 'duty' is an obligation, task and responsibility. There were so many taxes like purchase tax, sales tax that were submerged in GST. Besides, it also covers customs duty - import duty and export duty; besides excise duty. One more duty named estate duty that is taken away from the statue book a long time before on the ground that it was neither viable nor economical to administer. Though both taxes and duties for a bare look are various sources for revenue, there is a- delicate difference - unlike in the case of taxes where they are collected at the time of transfer of property, in the case of custom duty-import and export duties, they are primarily 'imposed' rather 'levied' to regulate and take care of the local industries and their interests - to promote exports and encourage local productions by properly leveraging the said duties rather than only taxing mechanism. In other words, the said levies are the duties cast on the government to take care of domestic industries interest from competition from across. In the case of excise duty, it was levied on the manufacture, though money spinning was an attended effect but now submerged in GST a big ticket tax reform launched in June 2017 whose impact is still under gauge. it is the time the Finance minister should raise to address the call of the time impacted by COVID 19.

Direct Tax a different approach provided in the previous Budget

The previous year budget has for the first time introduced a new income Tax slab rate for New Tax regime-FY 2020-21 that is, with optional. Under this new regime, a taxpayer has an option or a choice to choose either to pay income tax at lower rates as per New Tax regime on the condition that they forgo certain permissible exemptions and deductions available under income tax or to continue to pay taxes under the existing tax rates. The assesse can avail rebates and exemptions by staying in the old regime and paying tax at the existing higher rate. For brevity, the rates are not listed, but. the Act may be referred to.

The article is not discussing on the logic of the options provided, since it is a separate and distinct topic by itself.

Logically, for individual above 60 years of ageand thereafter, for individuals 80 years above,the minimum limit to be suitably to be increased to say RS. 10,00,000. In the present day serranoes, old people are left in the lurch since the children are placed, in fact, driven to different locations for day to day life and the elderly persons have left to the mercy to necessarily depend on holiday homes or special appointees, more so in CARONA syndrome. It is honestly hoped it will not fall on deaf ears

'The Finance Act 2020' has abolished the DDT and moved to the traditional system of taxation wherein dividends are taxed in the hands of the investors. As a result, the provisions of Section 115-O shall not be applicable if the dividend is distributed on or after 01-04-2020. Consequently, the domestic companies are not liable to pay Dividend Distribution Tax- a pet child of Chidambaram, the then Finance Minister but, shareholders shall be liable to pay tax on such dividend income. Since the dividend is now taxable in the hands of the shareholder, several provisions of the Act have been revived such as the permissibility of expenses from dividend income, deductibility of tax from dividend income, treatment of inter-corporate dividend, etc.

Though dividend taxable in the hands of the shareholders is a welcome feature, in 'the concept of capacity to pay', it would have been ideal to extend the tax exemption for dividend in the hands of the receiver for a specified amount at least for senior citizens above 80 years - say, a lakh or around and beyond that will be taxed at the applicable rate to the individuals" if his assessable income is less than RS.15,000, especially when their children have settled far away, even in foreign countries.

The author honestly hopes it will not fall on deaf ears but reach out to the Central Govt. more so to the Finance Ministry.

Other Direct tax suggestions are to gear up savings by increasing the limit of tax free contribution in to National Pension Scheme (NPS) from the present RS. 50,000 per annum to attract public savings into pension plans which not only forms the backbone of post retirement social security for millions of Indians but can be directed for nation building by suitable amendments to investment.

The insurance limit can be appropriately increased.

The present exemption limits for interest income for individuals, more so for senior citizens deserve active consideration for upward rise.

LIKELY COVID Impact on the Budget

Prime Minister Narendra Modi on May 12 announced a 20 trillion-rupee stimulus package, equivalent to 10% of the country's GDP, in monetary and fiscal measures to counter the economic fallout from the coronavirus pandemic.

The package will focus on reforms in land and labour markets, liquidity and laws, to cater to the cottage industry, micro, small and medium-sized enterprises, labourers, middle-class citizens and industries, among others. The relief package would aid businesses that have been under a prolonged shutdown and unemployed people, Reuters said, citing Modi.

Finance Minister Nirmala Sitharaman said May 13 that the measures include collateral-free loans of up to 3 trillion rupees and a maximum of 200 billion rupees in liquidity support for MSMEs, with further 500-billion-rupee equity support for such enterprises with growth potential via a fund of funds, Bloomberg reported.

The government also revised the definition for MSMEs, increasing the investment limit and introducing additional criteria of turnover.

In addition, employee provident fund support of up to 25 billion rupees will be extended for three months, Sitharaman said, adding that the government reduced statutory contribution to the fund by employers and workers to 10% from 12%. Sitharaman announced tax relief worth 500 billion rupees, and a special liquidity scheme for non-banking financial firms.

"This package will give a new impetus to the development journey of the country in 2020 and a new direction to the self-reliance Still more extended over the period. It’s going to be aherculean task for the government. We have to wait and see the Budget. Therefore, it is outside the purview of the article.

Road Building: This will help steel industries, construction industries etc. It will employments mostly in labour sectors with employment opportunities

Relief in input on fertilizers/ agricultural instrument/low rate of interest: How to address the rural population embroiled in stress and distress? Waiving agricultural loan could not be a panache. That may have the potency to generate defaults so as to seed political spawn. The input tax on agricultural feedings like fertilizers and instruments used in cultivation like tractors may be reduced considerably to relieve burden on agriculturists. The interest on agricultural loans may be considerably reduced. It is known fact that agricultural products are purchased at rock bottom price but sold at more than doubled the rates, middle men eating the cake in block. The budget should address this problem by instituting proper mechanism to ward of the rural mistrust and consequent unrest The government is in the process to roll out a pan India 'faceless and nameless' e-assignment procedure from 2018 for tax payers. Let us hope it will ease the position. For senior citizens, Government should address this keeping in view the present day scenario mostly issuing out of health related issues.

- Boost economy in all fronts,

- Deliver people at large to

- Get the required benefits so as to obviate any big bad impact on GDP, budget deficit due to untoward impact lashed out by COViD 19. The Finance Minister should "Arise, awake and stop not till the goal is reached". Opposition normally make a hue and cry on each Budget for no reason or rhythm. Now, it is going to be aghast.

To quote one of the couplets written by the author on Budget, It run as follows:

"The budget is not to get when it buds,
But, allow budding and growing for getting a share".