One Year of GST implementation: Two sides of the coin

On midnight of 1st July 2018, the biggest indirect taxation reform in the history of India, GST will turn 1-year-old. These long 12 months have been a journey of lots of ups and downs and one can argue that not everything is as bright and shiny as the government wishes us to believe.

GST simplified a slew of Indirect taxes with a unified tax and is expected to dramatically reshape India's 2.4 trillion dollar economy. The GST bill waited 17 long years before it was passed with a landslide majority votes in favour of it. Also, for the nationwide implementation of GST, a total of 33 GST Acts were passed accounting for 29 states, 2 UTs and 1 each for CGST and IGST!

A little trivia to entice the reader's attention is that GST was first implemented in France.
Also, India's GST is based on the Canadian model and was made on the recommendation of Vijay Kelkar Committee.

GST provides a four-tier rate structure for goods and services, which is based on the principle of 'equivalence' and aims to ensure that different economic classes are not subject to tax at the same rate.

In the past year, GST has been the most discussed and deliberated topic in the country finding its presence in the life of a normal hawker & peddler to a 1000 crores business tycoon.

GST has indeed touched upon the lives of almost every person in the country. But the majorly affected sections are the businessman, traders and professionals who are dealing with GST every other second of their ordinary day. But the industry has been facinga lot of transitional challenges post-GST implementation and the system has not yet been stabilised completely even after cessation of a year.

Let us look at some of the after-effects of GST as experienced and shared by the trade in the last one year of its implementation:

1. The tax base has increased to about 1 crore assessees & this, in turn, has also increased the tax revenue. The collection has touched upwards on 10 lakh Crores in last few months. 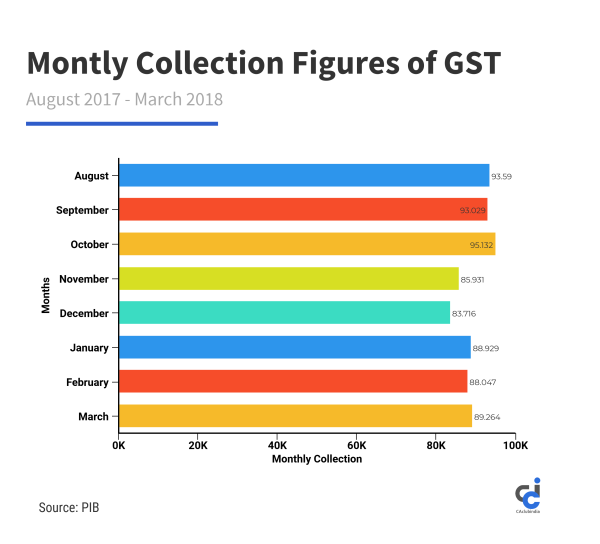 2. There has been the all-round focus on online IT right from the registration of taxpayer to processing of the refund. This has removed the requirement of one-to-one interaction with tax officials for hearings. The IT platform created by the Goods and Service Tax Network secures all the details filled up and creates unique IDs in the name of every dealer enrolled. This helps the tax department to figure out every business unit and thus create a different login mark along with calculations of annual tax return accumulated on the particular business unit.

3. Government has been proactive & consultative in making changes in tax rates and other administrative simplifications on the demand of industry.

4. In India, trucks travel 280 km a day as compared to travel time of 800 km in the US. Implementation of Electronic Way bill system has facilitated in faster movement of goods due to the removal of check posts on state boundaries. This has, in turn, reduced the turnaround time for goods transportation and has thus brought down the logistics and inventory costs.

5. GST has proved to be a milestone in controlling Inspector Raj to an extent and has thus kept a check on corruption.

7. GST is levied only at the final destination of consumption based on VAT principle and not at various points (from manufacturing to retail outlets) which in turn eliminates the cascading effect. This helps in removing economic distortions and brings about the development of a common national market. Also, HSBC estimates an 80 basis point rise in GDP growth over 3-5 years. NCAER pegs this at 0.9-1.7% thanks to the elimination of tax cascading effect.

8. GST has clearly mapped out the provisions applicable to the e-commerce sector which had been a major litigation issue in the Service tax regime and since these provisions are applicable all over India, there is little scope for any complication regarding the inter-state movement of goods anymore.

9. Earlier, the logistics industry in India had to maintain multiple warehouses across states to avoid the current CST and state entry taxes on inter-state movement. These warehouses were forced to operate below their capacity, giving room to increased operating costs. As an outcome of GST, warehouse operators and e-commerce aggregators players have shown interest in setting up their warehouses at strategic locations such as Nagpur (which is the zero-mile city of India), instead of every other city on their delivery route. Reduction in unnecessary logistics costs i already increasing profits for businesses involved in the supply of goods through transportation.

10. In the pre-GST regime, invoices needed a description of goods at every point of transaction. With the advent of GST, the invoices now include only an HSN (Harmonised System Nomenclature), a unique code to distinguish sale of different goods.

11. In an attempt to ease taxpayers' pain, a slew of forms like GSTR-2 and GSTR-3 have been suspended. Firms are now just required to file GSTR-1 and a summarized return GSTR-3B form.

12. Experts have also argued that the earlier C-forms exaggerated genuine interstate sales which took place due to interstate stock transfer. Under the GST regime, when taxes across all states are the same, there is no tax arbitrage to be made from recording transactions in this manner.

13. According to a World Bank report, India's new threshold limit of Rs. 20 lakhs is the highest among all the 31 comparator countries. Thus, the threshold for registration has actually increased comparatively with the pre-GST era from INR 5 lakhs under VAT and INR 10 lakhs under Service Tax to INR 20 lakhs under GST which still is way too low from the trader's perspective! 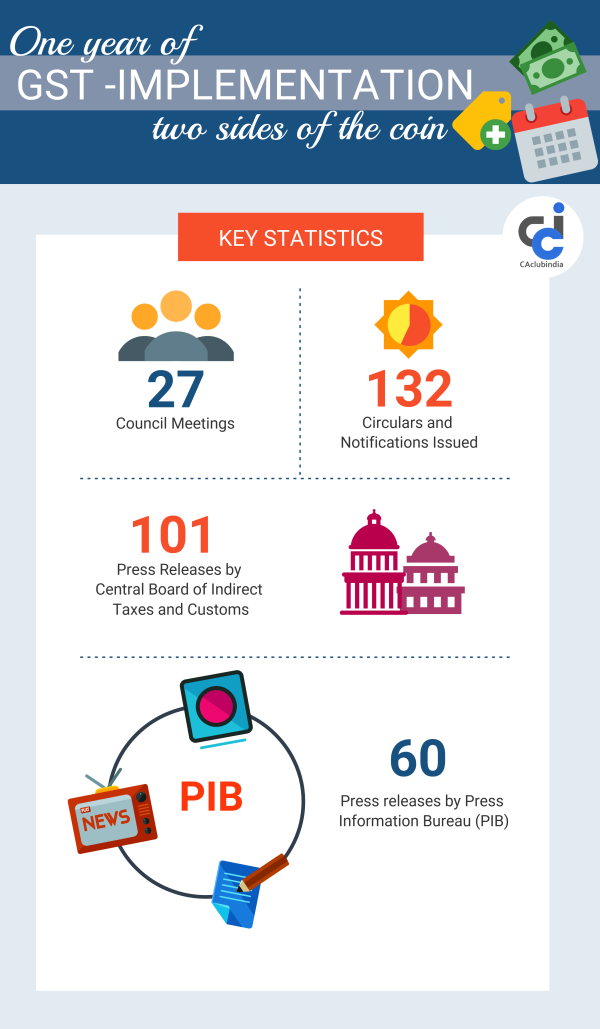 1. Though the entire system is online-based, a lot of technical glitches have been faced consistently by the taxpayers and this has created inconvenience to the public. It seems as if the IT infrastructure which is the backbone of this system was not completely ready to contain such huge traffic. It has been recommended by various experts that no late fee should be levied on nil returns filed as it would lead to improvement in compliance rate.

2. Various sectors like Real Estate, Petroleum & Electricity have still not been brought under the ambit of GST which is contradicting with the 'One nation - One tax' objective of GST.

3. One of the most peculiar problems that various assesse's are facing is that many assess are still unsure regarding their respective jurisdictional state and central authorities.4.

4. The return filing process prescribed in the Act is still quite cumbersome and time-consuming due to the presence of so many unnecessary details and fields. It needs to be made simpler in order to improve compliance and facilitate ease of doing business.

5. Definition of the taxable event 'Supply' which is the most basic deciding term, is inclusive and thus prone to litigations in future on its scope. Such lapses in the law need to be corrected swiftly by the Government.

6. The advanced Ruling mechanism, which was introduced with the objective to reduce litigations in future, has proved to be counterproductive. ARA of different states has given contradictory judgments on the same subject matters. This has instead resulted in the creation of confusion and chaos in the industry. Also, since these authorities are government officers and not any judicial authority, most of their decisions have been in the favour of revenue, often lacking principle of natural justice and legal jurisprudence which is necessary to give such judgements.

7. Exports directly affect India's standing at the world stage. The absence of a smooth and robust refund mechanism has affected the exports nationwide. There has been a delay in granting refunds to the exporters and has resulted in blockage of their significant working capital.

8. In Malaysia, more than a year's time was given to the industry to prepare for the tax change! But the small unorganized sector of India was not given enough time to be prepared for GST implementation, especially after demonetization. They have faced problems due to increase in operational costs of having a computer and engaging an accountant in order to make invoices, E-way bills and file GST returns.

9. Some states have introduced different threshold limit for generation of E-Way bills (e.g. - Delhi has increased the intrastate limit to Rs 1 Lakh, whereas some other states have a limit of Rs. 50,000)this leaves the suppliers who have registration in multiple states in confusion.

11. Including transactions such as 'Stock transfers between branches' in its scope has affected cash flow of businesses as it results in outlay for GST payment and taking credit later on.

12. A rate of 28% attracted on certain goods is one of the highest tax rates in the world. In fact, according to a World Bank report, India has the highest standard GST rate in Asia, and second highest in the world after Chile. Hence, the Government should rationalize the GST rates at the earliest.

13. Many notifications and circulars issued by the government in the post-GST implementation era contradict with the provisions of the Act. This has resulted in confusion for the professionals as well as taxpayers as ideally the Act supersedes the circular which is clearly not happening as of now.

14. Some Experts believe that CGST(Central GST), SGST(State GST) are nothing but new names for Central Excise/Service Tax, VAT and CST. Hence, there is no major reduction in the number of tax layers.

15. One falls out of this complicated tax system is increasing litigation. An increasing number of investigations by the National Anti-profiteering Authority and the flood of Advance Rulings point to the fact that many aspects of GST need urgent streamlining.

There is no denying the fact that any new taxation system in large country like India which has such a huge population with so many different cultural and political factors affecting it,would need at least 3-5 years to settle down. GST was the tax reform we had strived for and any new system would have certain teething issues.

In fact, as per the latest World Bank report, 'The Indian Goods and Services Tax (GST) system is among the most complex in the world with one of the highest tax rates.'

Based on the first nine months of data (and including April 2018 collections in those of March 2018 as they should be), revenue collections for nine months were 8.2 lakhs crores (11 lakhs crores annualised), yielding revenue growth of 11.9%, compared with the relevant pre-GST numbers. The implied tax buoyancy (responsiveness of tax growth to nominal GDP growth) is 1.2, which is high by the historical standards for Indirect taxes.

But, a few major changes/amendments as pointed out by various experts to make GST implementation and its administration even more efficient are enlisted as follows:

GST is indeedthe next biggest tax reforms in India. But India being a federal structure, a lot of implementation will depend on the cooperation from the State governments. There are a lot of operational challenges because of our political and cultural diversity which needs to be worked upon and sorted at the earliest.

Govt. plans to develop simple mobile apps for suppliers who are engaged in B2C supplies exclusively and help small traders to settle in the new taxation regime.

Also, According to the latest news forecast, the Government is planning a major overhaul in the Goods and Service Tax (GST) as the GST Law Review Committee "has identified around 180 issues" such as single registration for a taxpayer across India, change in the definition of 'supply' under Section 7 of the Central GST (CGST) Act, and doing away with the precondition of matching returns with claims for availing input tax credit (ITC).