Racing against time on the Government's Goods and Services Tax (“GST”) implementation target of April 1, 2017, two – day meeting of all powerful GST Council, 8th in a row, begun on January 3, 2017. On the first day of the GST Council meet, the Ministry of Civil Aviation, Commerce, Railways, Electronics and IT and industry bodies such as NASSCOM made presentations on their expectations from GST.

8th GST Council meet concluded on January 4, 2017, but, the deadlock continues between the Centre and the States on the vexed issue of “cross empowerment”, or “dual control” of assessees. Gist of the key takeaways from the 8th meeting of the GST Council is given hereunder for easy digest:

The GST Council has reached a stalemate on dual control between Centre and States. Even after eight meetings of the GST Council, the States and Centre have been unable to reach any consensus on the issue of dual control in administrative control of GST. The question of who will exercise control over GST assessees -- the Centre or the States -- remains critical. The States want exclusive control on businesses with turnover below Rs. 1.5 crores, including the service taxpayers.

The States have demanded for enhancing the number of items on which cess is to be levied to compensate them to deal with revenue loss estimated at Rs. 90,000 Crore in the wake of demonetization.

In this regard, the Hon’ble Kerala Finance Minister, Mr. Thomas Isaac said that “Earlier the Council had decided on four commodities for levying cess. Now it has been decided that it would be as notified by Council and at the end of year five it would be merged with the GST rate or divided between Centre and states as the Council decides.”

Fresh roadblocks have emerged on products moving in High Seas with Coastal States demanding tax jurisdiction in the GST regime over high sea sales in offshore regions within 12 nautical miles, whereas Centre claims it to be a Union-administered territory. The issue broadly is that area within 12 nautical miles of the sea is Indian territory and a question arises whose territory it is - whether belong to the Centre or the States. Mr. Jaitley said that a constitutional answer needs to be found and the solution has to be legally tenable.

IGST on transactions among SEZs:

Making a presentation before the GST Council, Commerce and Industry Minister Ms. Nirmala Sitharaman sought exemption of Integrated Goods and Services Tax (IGST) on goods transferred from Special Economic Zones (SEZs) across States and said that since SEZs are considered economic zones outside the Country’s territory, IGST should not apply on transactions among them. She also sought lower GST rates for employment-intensive plantation, leather and cement industries and urged not to end duty exemptions for exporters.

The Hon’ble Finance Minister, Mr. Arun Jaitley after the two-day GST Council meet said that IGST has 11 chapters and initial ones are discussed but few remains because discussion was inconclusive and said that they are hoping to resolve vexed issue of IGST and dual control over assesses in its next meeting on January 16, 2017:

“We know the difficulties, we are moving against time. Dual control is a complex issue. We started a discussion that was inconclusive. We have decided to meet on January 16 to untie the knots in this issue.”

Further, in regard to implementation of GST from April 1, 2017, the Hon’ble Kerala Finance Minister, Mr. Thomas Isaac said the following-

“Working overtime, it should be possible to meet the deadline of September. I am not very optimistic about rolling GST out in June/July. Because it is a new tax and lot of complexity involved, it would be better to move in after full preparation. So GST, to my understanding, will be implemented from September,”

In the wake of the likely delay of GST implementation, the people at large, will get more time to prepare themselves for the biggest indirect taxation reform in India.

We are pleased to announce release of our Handbook on Goods and Services Tax, titled, "GUIDE TO REVISED MODEL GST LAW (With Draft Rules on Registration, Payment, Invoice, Returns and Refund)” [3rd Edition]. 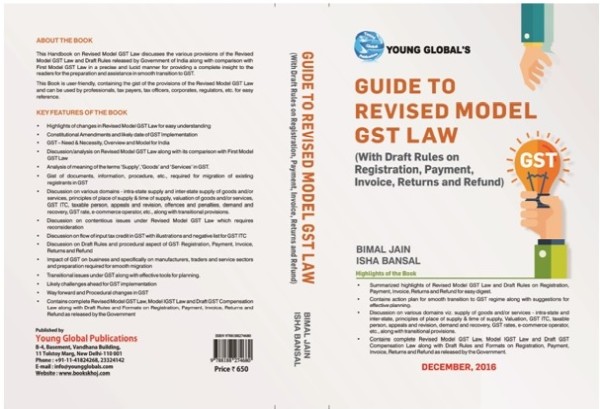