Union Budget | Key Highlights of Changes under the Customs and Excise


Union Budget 2021 was presented in Parliament on Monday, February 1st, 2021.Presenting the first ever digital Union Budget, Union Minister of Finance and Corporate Affairs Smt. Nirmala Sitharaman stated that India’s fight against COVID-19 continues into 2021 and that this moment in history, when the political, economic, and strategic relations in the post-COVID world are changing, is the dawn of a new era - one in which India is well-poised to truly be the land of promise and hope.

The Budget proposals for this financial year rest on following six pillars:

This document summarises the changes made/ proposed under the Customs and Excise - Section wise in comparative manner for easy digest.

Unless otherwise stated, all changes in rate of Customs duty take effect from the midnight of 1st February/ 2nd February 2021. A declaration has been made under the Provisional Collection of Taxes Act, 1931 in respect of clauses 95(i) [Amendment of First Schedule to the Customs Tariff Act, 1975], 115 [Agriculture Infrastructure and Development Cess on imported goods and 116 [Agriculture Infrastructure and Development Cess on excisable goods] of the Finance Bill, 2021 so that changes proposed therein takes effect from the midnight of 1stFebruary/2ndFebruary 2021. The remaining legislative changes would come into effect only upon the enactment of the Finance Bill, 2021. 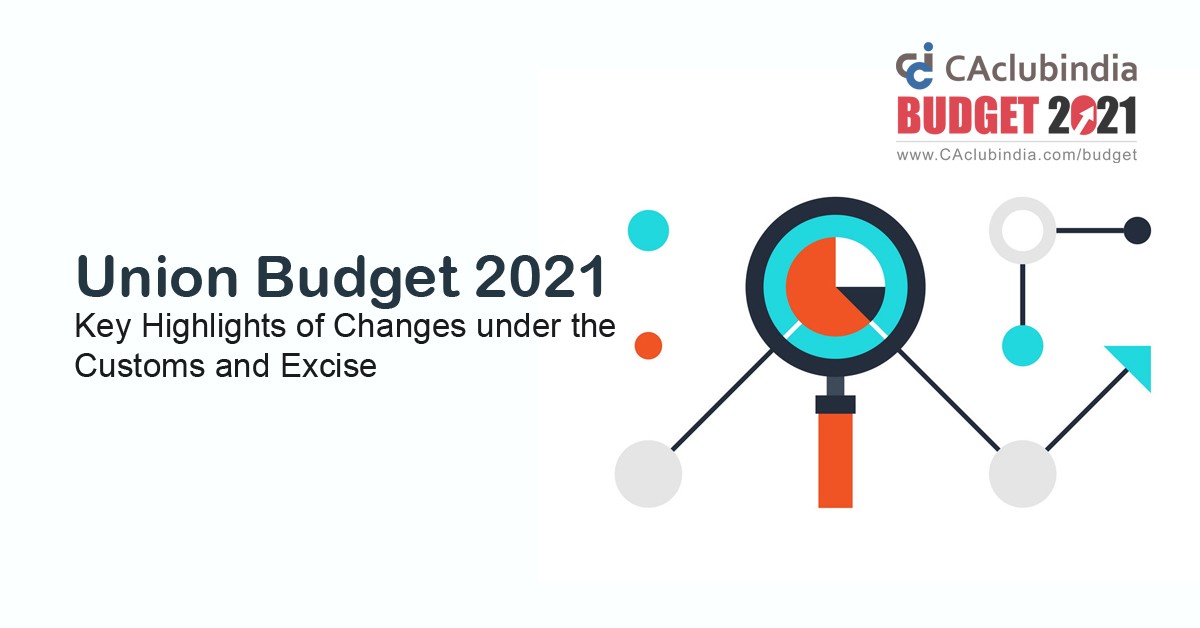 Proposed Amendments in the Customs Act, 1962

Synopsis: Certain significant changes have been made in the Customs Act, 1962 ("the Customs Act'). Mostly, these are for enhanced trade facilitation. A definite period of two year, extendable by one year is being prescribed for completion of investigation. Also, it is being prescribed that conditional exemption shall be having validity of two years unless specifically provided otherwiseor varied or rescinded earlier (the notification would end on 31stMarch falling immediately after two years of issue of exemption).

IGCR Rules have been amended to allow job work on imported goods and also to allow disposal of goods at payment of duty on depreciated value. A few changes are made for improving compliance.

Amendments in First Schedule of the Customs Tariff Act, 1975

Amendments in the Customs Rules

• to allow imported capital goods that have been used for the specified purpose to be cleared on payment of differential duty, along with interest, on the depreciated value.The depreciation norms would be the same as applied to EOUs, as per Foreign Trade Policy.

Following are the gist of the notifications which makes amendment in Customs Tariff and Non-Tariff, with effect from midnight of Feb 01/Feb 02, 2021.

These changes would become effective on 02.02.2021, 00:00 hours owing to thedeclaration made under Provisional Collection of Taxes Act, 1931.

1) AIDC, as duty of customs has been proposed under Clause 115 of the Finance Bill, 2021. Enabling provisions has been made for levy of this cess on all imported goods at the rate not exceeding the rate specified in the First Schedule to the Customs Tariff Act, 1975. However, it would be levied only on specified goods as detailed below. All other items are being exempted from this Cess.

* All goods originating in or exported from the United States of America.

2) For the purpose of calculating the AIDC, the import value of such goods shall be calculated in the same manner as the value of goods is calculated under the provisions of Section 14 of the Customs Act, 1962.

3) Social Welfare Surcharge (SWS) would be levied on AIDC. However, exemption from SWS on AIDC has been given to gold and silver.

4) Further, goods imported under Customs duty exemptions available under FTA and EOU as well as under advance authorization schemes are being exempted from AIDC.

AIDC of Rs 2.5 per litre has been imposed on petrol and Rs 4 per litre on diesel as an additional duty of excise is proposed under Clause 116 ofthe Finance Bill, 2021. Accordingly, Basic Excise Duty and the Special Additional Excise Duty have been calibrated so that there would be no additional burden on the consumer.

The table below summarizes the change in various duties applicable to Petrol and Diesel:

Following are the gist of the notifications which makes amendment in the ExciseTariff with effect from February 02, 2021, unless otherwise specified.

(a) "Basic Excise Duty" means the excise duty set forth in the Fourth Schedule to the Central Excise Act, 1944.

(b) "Road and Infrastructure Cess' means the additional duty of central excise leviedunder section 112 of the Finance Act, 2018.

Amendments in Fourth Schedule to the Central Excise Act, 1944

Amendments in Schedule VII of the Finance Act 2001 (NCCD Schedule)

Note: For imposition of Agriculture Infrastructure and Development Cess (AIDC) as an additional duty of excise proposed on Petrol and High speed diesel, refer discussion above.