Infrastructure sector in India has not been able to perform to its full capacity, majorly due to the Government red tapes, lack of funds and very long gestation period in completion of the projects. With introduction of Public-Private-Partnerships (PPP), this scenario is expected to change.

Infrastructure Financing - one of the most crucial factors – needs to evolve to an advanced level from the till recent conventional ways of taking loans, grants, special allocations, etc.

This research article aims to discuss a not much explored way of funding the infrastructure needs in the country i.e. ‘Tax Increment Financing (TIF)’.

It will be important to note that ‘Infrastructure’ per se cannot be imported or exported or shifted. It has to be built and constructed at the geographical place where it is required to be used.

Infrastructure is a ‘huge’ subject matter requiring primarily, huge amount of finance, labour and time. Infrastructure is definitely the backbone of the economy and if India has to grow at double-digits, then investment in this sector has to be given paramount importance. This is one of the sector through which the Government increases spending and creates various opportunities, thereby impacting the growth of the economy since lack of supportive infrastructure acts as a drag on the GDP growth rate.

In the first business session of the Annual Meeting of the Asian Development Bank (ADB) in Manila on Friday, 4th May 2012, Indian Finance Minister Pranab Mukherjee has said that, “India needs about $1 trillion investment in next five years for infrastructure development, half of which has to come from the private sector. India has made provisions for creating infrastructure debt fund to attract investment in this sector. Infrastructure offers huge scope for foreign investments also.”Also, IDFC Projects Ltd.’s Managing Director, Pradeep Singh in his presentation in the same meeting said that “In order to sustain growth targets (9% GDP), investment in infrastructure would need to increase further to over 10 per cent of GDP by 2017.”

In the Eleventh Five-Year Plan, investments that were allotted for this sector were to the tune of 20 lakh crore, which was raised to 50 lakh crore in the Twelfth Five-Year Plan. Further importantly, the government has envisaged that out of the total investments, around 50% would come from the private sector in the Twelfth Plan as against 30% estimated in the Eleventh Plan. This is a major step that the government has taken for this sector is involving private sector participation through encouraging Public Private Partnerships (PPP).

According to the Ernst& Young Study – Infrastructure Today, investments planned for infrastructure (sector-wise) in 12th Five Year Plan can been seen from the below pie chart: 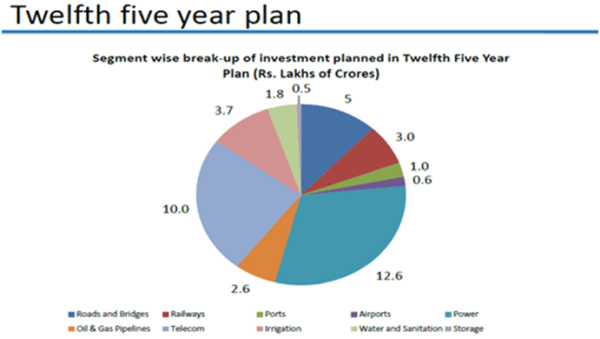 Also the below chart shows the planned gradual increase in investments in infrastructure sector (sector-wise): 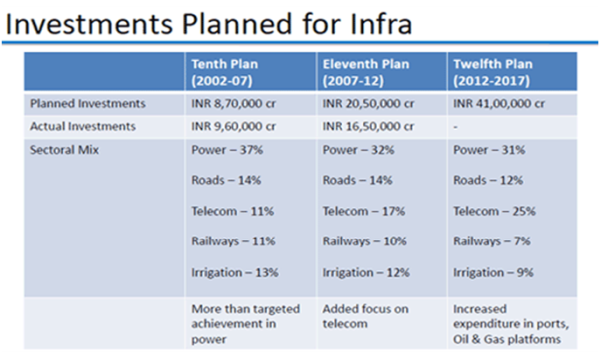 Infrastructure and other public utility services have traditionally remained under the domain of Government and other statutory bodies in India. But with an upsurge in the demand for transport, water supply, sewerage, drainage and solid waste management systems, Indian government has found itself lacking in the financial, technical and executive capacities that are needed to bridge the demand–supply gap in infrastructure.

· Municipal Bonds – This way has not been successful in India, though few municipal corporations like of Ahmedabad, Bangalore, TamilNadu, launched Municipal Bond issues, but got very low response and could sustain and fetch the desired results. This is one of the ways which can be re-looked by the government and state agencies.

· Debt financing from banks – The Reserve Bank of India (RBI) has allowed banks and non-banking financial companies (NBFCs) to set up Infrastructure Debt Funds (IDFs) to accelerate and broaden the funding sources for the country’s $1 trillion infrastructure requirements during the 12th Five Year Plan. An IDF may be set up either as a Trust or as a company. A trust based IDF would be a Mutual Fund that would issue units, while a company based IDF would be in the form of a NBFC that would issue bonds. A trust based IDF (MF) would be regulated by SEBI and an IDF set up as NBFC would be regulated by RBI.

· Takeout Financing: where the takeout finance scheme has been designed to enable lenders to address the concern of the hitting the sectoral limit, asset-liability mismatch and liquidity issues that may arise by the long-term debt financing to core projects. Under the scheme, banks and lenders can enter in an arrangement with financial institutions for transferring the loan outstanding in their books to those of the financial institution which is taking out long-term debt.

· Viability Gap Funding (VGF):In a situation where the project is unlikely to get private investment, the government can meet a portion of the cost making the project viable. VGF is typically provided in competitively bid projects. Projects in a number of sectors such as roads, ports, airports, railways, inland waterways, urban transport, power, water supply, infrastructure projects in special economic zones, tourism infrastructure projects are generally eligible for viability gap funding. The government now proposes to add social sectors such as education and health to the list.

Reasons for lack of funds for Infrastructure:

· Banks in India are still finding infrastructure finance a highly risky preposition due to the peculiar nature of the duration of the assets and liability side. Since the banks have to lock in the loans granted to the infrastructure sector for long gestation period (typically above five years) funding these loans through short term deposits poses risks and limits the lending ability of the banks. Also due to the asset-liability mismatches, banks usually lend on floating interest rates which negatively impacts the costing mathematics of the sector. Also banks do not have the required expertise since infrastructure financing involves taking on project risk and commodity risk over and above credit risk, and the banks are not prepared for such situations.

· Financial markets are inadequately developed in India, which currently leads to PPP projects depending on commercial banks for funding. This exposes the investors to risk concentration, maturity mismatches, and rising interest rates and tightening credit conditions over the life of the project.

· Financial institutions also hesitate to fund the infrastructure projects due to reasons like delayed execution of projects, labour problems resulting in even cancellation of projects, lack of monitoring and planning, political issues, etc.

· Funding for re-building or maintenance is also not available to the extent required.

· Amidst the fast growth in other sectors like retail, housing, banking, services, IT, financial institutions are inclined towards providing funds to these sectors and therefore, infrastructure development has taken a back stage.

Looking at the above ways of infrastructure funding / financing and considering their drawbacks or failures, unexplored ways of Infrastructure financing needs to be looked at by public as well as private agencies and more innovative ways needs to be introduced to make the infrastructure sector work to its full capacity and show the desired results.

Tax Increment Financing (TIF) is one such unexplored way of financing the infrastructure projects in India, particularly at the municipal or state level.

Under the Tax Incremental Financing (TIF) is a means of funding public sector investment infrastructure judged to be necessary to unlock regeneration in an area, and which may otherwise be unaffordable to local authorities. The goal of TIF is to support and guide the limited public finances available for regeneration and helping to lever in additional private sector capital. TIF uses future additional revenue gains from taxes to finance the borrowing required to fund public infrastructure improvements that will in turn create those gains.

Tax increment financing (TIF) works by allowing local authorities to borrow money for infrastructure projects against the anticipated increase in business rates income expected as a result of the said infrastructure project. They can use that borrowing to fund key infrastructure and other capital projects, which will support locally driven economic development and growth.

The TIF system relies on the appreciation in value of the land and buildings in the TIF district. If a development is profitable, then the debt and other costs will be paid for by the growth of property tax revenues. If the property fails to increase in value, the improvement costs fall back on the general taxpayer.

TIF is an economic development tool available at the municipality level.

They funded the capital improvements by accessing bank loans to be repaid by the households, as an annual tax increment, which would get immediate benefits due to the implementation of the TIF programme in select neighbourhoods.

An approach was followed to develop complete hard infrastructure in all neighbourhoods by providing water supply, underground drainage, roads, storm water drains and street lights. In the core area of GHMC, the focus was on augmenting city infrastructure like over-bridges and white top roads.

Neighbourhood residents had to contribute 30% of the local water project cost if internal distribution lines had to be laid. Nearly 800 neighbourhoods were identified based on the existing infrastructure gaps in the peripheral neighbourhoods. In the first part, the hard infrastructure requirements were evaluated through a rational-technical survey by Engineers. Then the survey findings were confirmed by the area sabhas, ward committees and the local elected representatives. Lastly, operational plans were divided into stages, and during the first phase, those already having water supply and drainage network but no roads; those not having water supply or drains, and those requiring only recreational facilities, such as parks and playfields, were selected.

Expressions of interest were invited and 13 banks and HUDCO participated in the bidding process. State Bank of Hyderabad was selected because it offered the lowest interest rate of 10.75%. The loan repayment period was 10 years and the loan was to be accessed in tranches according to requirement and progress of works.

The Hyderabad municipality has achieved a great success with this model.

It's time for other city municipalities to adopt such ways to fund their requirements and create a better place for people to live.