Editorial Desk of the Magazine” THE MAVERICK TREASURER” kept the definition of OTMF is when you are keeping the Strike Rate of the Options Contracts at 1 Implied Volatility away in case of Buy Put Contracts or1.5 Implied Volatility away in case of Buy Call Contracts. The purpose of taking OTMF is to make sure that both Buy Put and Buy Call Contracts come up low premiums to pay and subsequent FX line item in the books of Exporters and Importers.

Buy Put is an Options Derivatives Contracts where by an Exporter having the right to sell his Foreign Currency Receivables at an agreed rate with the bank while Buy Call is an Options Contracts where by Importer is having right to buy from Bank at an agreed rate. Net Settlement of both Buy Put and Buy Call along with other Options Derivatives is done at Tokyo Cut which is published at 1130 AM IST or 3.30 PM Tokyo Timings.

## Please be note that Risk Management policy of the Corporate, Bank, Proprietary Trading Desk, and Financial Institution should be very robust to understand Moneyness aspects of Options Contracts and associated MTM (Mark to Market) on these Contracts. At the same timeshould understand technicalities of Hedge Accounting guidelines under IFRS, US GaaP.

Sitting today if an exporter would like to sell his Foreign Currency Receivables of say 10 Months period then he would be getting the Outright Rate of 70.9925 or ~ Rs 71/$. If the price at maturity date would be greater than Rs 71 then Exporter would lose and if the price would be lower than he would gain the show. This Gain/ (Loss) on Forwards Contracts is known as Opportunity Cost however would surely hit FX line in P&L.

To resolve this issue both Exporters and Importers are advised to take Options Contracts to hedge their ForecastedReceivables, Payables at least for rolling 12 months however they can also hedge their longer tenor receivables, payables using longer tenor Options contracts as well like Cost Reduction Structures, Structured Derivatives which in turn covers

## Reserve Bank of India (RBI) is restricting to have such Cost Reduction Structures or Structured Derivatives till 2 Years rolling period. 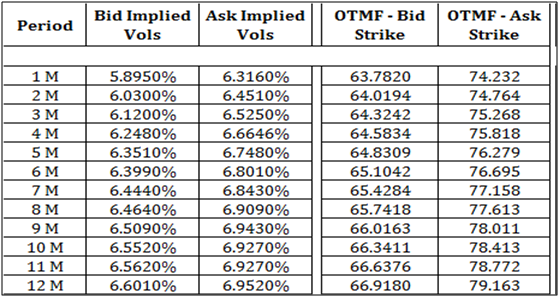 Average Implied Volatilities for both Exporters and Importers stand ~ 6.5% for complete 12 months which effectively means there is a great probability that INR would depreciate by at least 6.5% by that time maturity would come henceforth both Exporters and Importers are advised to have Options Contracts in their books which would save themfrom depreciation in INR and off coursesave FX line in their P&L.

Suppose an Exporter is taking a 6 Months Forwards Contracts at an agreed price of 69.5550 to cover his USD forecasted receivables. While at the same time Importer is covering his near 6 Months payables at 69.6950.

At the same time there are some Exporterswho are taking OTMF Buy Put at 65.10 and Importers taking OTMF at 76.69 levels to cover their forecasted receivables and payables respectively.

Advice from Editorial Desk:-Editorial Desk of “ The Maverick Treasurer “ recommends usage of Options Contracts to hedge their receivables and payables at least near 12 months. As we understand that markets are getting highly volatile henceforth Options would be able to assist you saving your Downside and Upside.