The New GST Return System which was to be implemented from the 1st of April 2020 has now been deferred till September 2020 by the GST Council in it’s 39th meeting. This article presents a brief overview of the New GST Return Filing System, the introduction of SAHAJ and SUGAM, the payment of GST, etc. In the present scenario of GST, return filing is a lengthy and cumbersome procedure because of multiple return filing. There may be variations in returns related to the same period. (i.e. between GSTR 3B VS GSTR-1). GST council could not successfully implement GSTR 2 and GSTR 3 facilities because of technical and practical feasibility issues. GST council realized all these shortcomings and in its 27th meeting held on 4th May 2018 it approved basic principles of new GST return System. In the 28th meeting held on 21st July 2018, GST council approved key features and new format.

What is the new GST return system ?

• NIL returns can be filled by SMS

• Taxpayers with turnover up to 5 Cr are included in the "Small Taxpayer" base.

• Introduction of new Sahaj & Sugam returns to ease return filing for sellers with local market base.

• A New separate Amendment Return has been introduced.

• Under New  System there will be one monthly return(GST RET-1) per taxpayer except in few cases such as:

• 20th of next month will be due date for large taxpayers 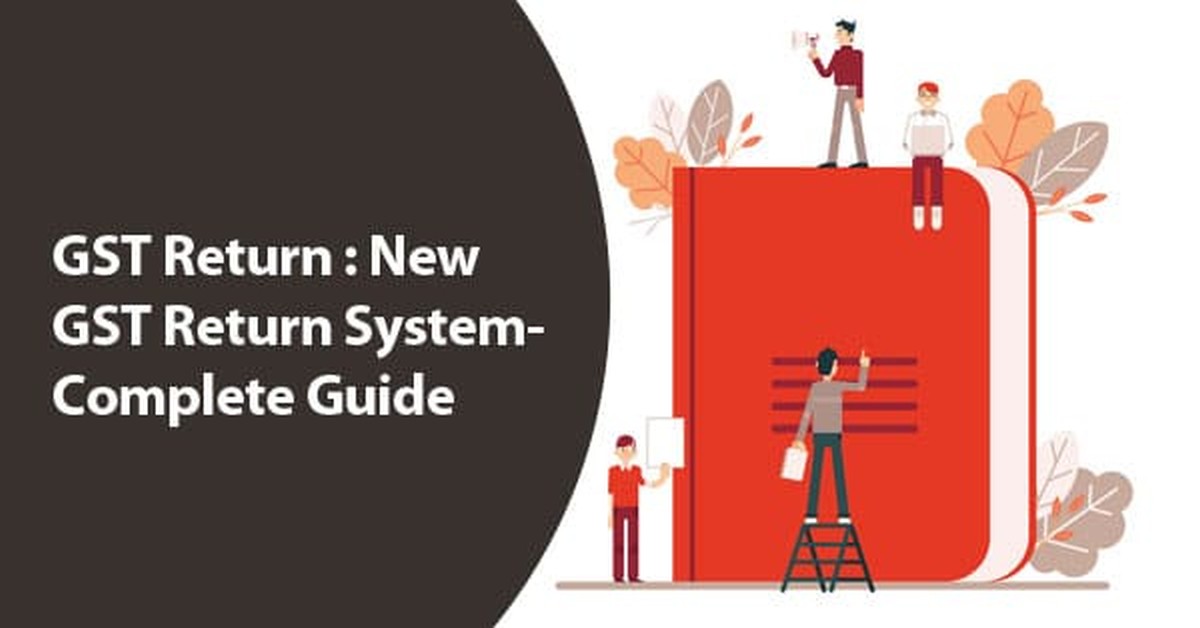 • New return format, GST RET-1 will contain all details about supplies made, ITC claimed, and GST payment(along with interest). It contains mainly 2 annexures.

• Returns have annexure attached to it. From such annexure data will get auto populated in the main return.

• Input tax table has auto-populating cells (which will get populated from input annexure).

How can I claim ITC in the New Return System?

• Using this facility, we can check whether counter party has uploaded our invoices which will enable us to avail ITC

• After return filing period, the purchaser can check the counterparty filing status of return to see if he has discharged his liability.

• For 6 months after implementation of the new return facility, the recipient shall avail ITC on self- declaration basis even on the invoices which are not uploaded by the supplier by 10th of next month.

• After the transition phase there seems a chance of an increase in working capital because if the supplier uploads invoices after 10th we may need to pay taxes out of our own pockets for settling liability of the current period.

• If the supplier uploads the invoice but does not file the return, it’ll be considered as self-admission of the liability and recovery proceedings shall be initiated against him.

• No automatic reversal of tax on recipient’s ledger due to non-payment of taxes by the supplier.

• Recovery shall be 1st done by supplier and only in special cases such as taxpayer missing; closer of business etc. recovery will be done by the recipient.

• Only the invoices or debit notes uploaded by the supplier on the common portal shall be the valid document for claiming ITC.

• If "missing invoices" are not uploaded by the supplier within prescribed time, Input tax claimed by recipient on such invoices will be recovered by recipient.

• If the supplier does not upload the "missing invoice", it is recipient’s liability to report them within 2 tax periods (Table 3L in the annexure of supplies to main return).

For example: Invoice of April on which recipient claimed ITC but not uploaded by supplier, then such invoice shall be reported by the recipient not later than in the return of June, which will be filed in the month of July.

• Information about missing invoices uploaded by the recipient shall be made available to the supplier.

ACTIONS TO BE TAKEN ON INVOICES UPLOADED BY SUPPLIER

CONCEPT OF LOCKING OF INVOICES

• Locking of invoices is like handshake between recipient and the supplier.

• It means that the recipient has accepted the invoice uploaded by the supplier.

• Separate locking facility is also available before filing of return.

• Any invoice on which no action has been taken, will be deemed to have been locked and accepted when recipient will use ITC related to such invoices for filing of monthly return

• The invoices will be deemed locked if recipient does not take any action on the invoices & takes inputs on such invoices.

• Once the invoice is locked no changes can be made by the supplier.

• Only changes in locked invoices can be made through Debit/Credit notes raised to affect changes in them.

• A wrongly locked invoice can be unlocked by recipient before filing of return subject to reversal of credit in his credit ledger.

REJECTION OF INVOICES AND IT FACILITY

• Where an invoice has been uploaded with wrong GSTIN, it’ll be shown in the "viewing facility" of that wrong GSTIN.

• As that entity is not the actual recipient of goods/services, he should "reject" such invoices.

• To assist matching of correct GSTIN, Govt utility may include in the tool, a facility which will create a recipient and seller master list from which GSTIN numbers can be matched.

• Invoices can be "kept pending" due to one of three reasons:-

a) Supply not received by the recipient.
b) Recipient holds the opinion that invoice needs amendment.
c) Recipient is not able to decide whether to take input tax credit for the time being.

• Invoices should be marked pending by recipient and no ITC will be available on such invoices for the time being.

• These invoices can be accepted on later dates and credit can be taken in future tax periods.

• Payment of taxes has to be done in full by the supplier as is being done in the present scenario. No provisions of filing payable returns.

• If in one return there are invoices related to 2 or more periods (say due to addition of missing invoices) then liability of such different periods will be shown separately.

• Such liabilities, even if shown separately, can be paid using one single consolidated challan.

• Interest shall be applicable on invoices which are uploaded after their due date.

• There would be a facility to file 2 amendment returns for each tax period within time specified in sec 39 (9) of CGST act.

- September of next year OR
- Date of filing of annual return

• To amend the "missing invoice" we need to amend the return to which that invoice originally relates to.

• For ex: If an invoice of April is uploaded through the return of month of July, then to amend such "missing invoice", return of April has to be amended.

• Therefore, it is advised to firstly upload all the missing invoices and only after that we should use the amendment facility to amend invoicesas any one return can be amended only twice

• No amendment is possible for locked invoices. So, suppose if the supplier uploads the invoice in the month of May and recipient accepts the same. Our opinion is that the same cannot be amended. Or if the invoice can be unlocked even after filing of return the same can be amended. But no clarity on the same.

• If ITC credit is available in the credit ledger then even such inputs can be used to settle the amended liability.

• If due to amending such return, liability gets negative (say because of more payment for lesser liability) then such negative liability will be carried forward as is and will be brought forward in regular return of next tax period.

• If liability, due to amendment, changes more than 10% then, a higher late fees MAY be prescribed to ensure that reporting is appropriate in regular returns. This will also ensure that only genuine entries will get amended

• As per Notification No 70/2019- Central Tax, all the assesses having turnover above 100 Cr are mandatorily required to generate an Invoice Reference No. (IRN) for all the B2B invoices.

• The invoice will not be a valid document for the purpose of claiming input unless it has a unique IRN and QR code generated on the E-Invoicing portal.

• As all the B2B invoices will be uploaded on the E-Invoicing portal, the same will automatically be reflected in the outward supply annexure of new return format which will ensure seamless flow of credit for all the registered entities dealing with the assesses having turnover 100 Cr.

• Every taxpayer whose turnover in preceding is less than 5 Cr has an option to opt for a quarterly return under GST.

• Option of filing quarterly return must be exercised in the beginning of every year.

• We have an option to change the periodicity of such return which can be exercised once a year at the beginning of any quarter.

• Quarterly returns do not have facility of reporting missing/pending invoices

• If small taxpayers wish to have facility to report missing/pending invoices then he may choose monthly return filing.

• Even if we are filing quarterly returns, the taxes must be paid monthly through a "payment of self-assessed tax form"

• Due to monthly payment of taxes, there does not seem much change in the quarterly scheme of return filing as compared to current scenario.

SELF DECLARATION FORM FOR PAYMENTS

• Liabilities as well as the inputs of the entity have to self-declared. Remaining payable, if any, has to be settled in cash by paying a challan. Only full settlement of liability is allowed in the payment form.

SAHAJ and SUGAM under New System

• Government realized that it is not feasible for a small taxpayer to file a lengthy "monthly/quarterly" every time when most of the fields for him are irrelevant.

1. Sahaj: People having only B2Cs customer base

2. Sugam: Allows both, B2B and B2Cs customer base

• These returns will be helpful for small taxpayers who are only concerned with their local market.
• Number of such taxpayers is very large and hence it can be said that this will truly bring ease in return filing for small tax payers.
• But even in these returns, tax needs to be paid on a monthly basis.
• No concept of Missing/ pending invoices and no amendment return.
• So not feasible and suggestible as no amendment possible

• Originally GSTR1 ,2 AND 3 were made for a real ideal situation, which in the present day was not possible.

• Clearly the current amendments are aimed to mitigate the shortcomings of earlier system but clarity is needed on a lot of points.

• Taking credit on a provisional basis and then reversing and unlocking, rejecting invoices is all a very cumbersome process. It will be difficult for practitioners to actually file returns of their clients as it involves a lot of paper work and the time and will need more efficient and educated staff for just simple return filing process.