GST is approaching quick and fast *take background from some random GST article*. The following discussion focuses on Place of supply of Goods aspect. Place of supply (‘POS’) should mean the place where supply happened or made to be happened by some government force. For now let us just consider only that place of supply as per Model GST Law (“GST law”) is important to determine which taxes amongst CGST & SGST or IGST needs to be charged.

Before moving in to complex things, let us take a very amateur example of a transaction of sale of goods between a supplier and a buyer wherein the goods are sold on DDP basis wherein the supplier, supplies the goods at the premises of the buyer and undertakes to pay for all the expenses for the delivery, namely transportation, insurance etc.

Under this model, there should not be any confusion regarding what should be the place of supply, as the movement of goods terminates at the factory gate of buyer for delivery to him. So in case the goods are supplied by A of “Delhi” to B of “Delhi”, the transaction should be intra-state supply of goods since the location of supplier and POS both are in same state, CGST & SGST to be levied, similarly if the goods are supplied by A to C of “Haryana”, the location of supplier and POS comes to different states, IGST to be levied. 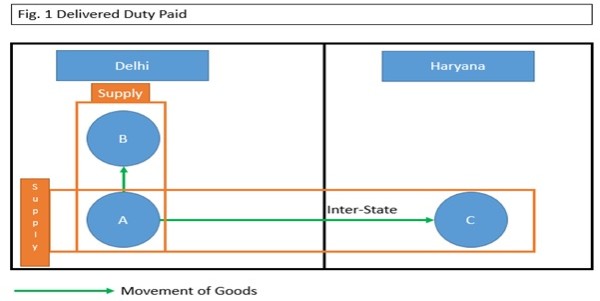 Easy, right? Let us throw the example of an Ex-works sale of goods under which the Supplier supplies the goods to buyer at his (suppliers’) factory gate and after that the buyer takes the goods to his premises for his subsequent use.

1. “Location of goods at the time at which the movement of goods terminates for delivery to the recipient” (‘limb 3’)

By the above time, I had anchored myself that in Ex-works cases, the POS will be the factory gate of supplier. An intelligent mind told me that the limb 3 of the clause should not be read in isolation, but it should be read in the conjunction with the limb 2 i.e. termination for delivery to the buyer should not be meant merely from the point of view of the supplier, but it should be read as the termination for delivery to the buyer from point of view of all the three persons mentioned in limb 2 i.e. the supplier, the recipient (the buyer) or any other person,

Meaning thereby, regardless that the supplier has terminated the movement of goods at his factory gate to the buyer, the movement of the goods is continued by the buyer (or the hired transporter on his behalf) and the final movement will be terminated only when the goods reaches the premises of the buyer. Fine, there you go, as per this interpretation, even in Ex-works cases, the POS will be the premises of buyer.

Right, if it wasn’t for two limbs, you have another limb to give force to. Now, reading from the pre amble of the section 7 (2), “where the supply involves” i.e. this provision (for determining Place of supply) will operate only during the time the supply continues. In other words, wherever the supply of Ex-works sale get completed, this section will freeze and movement of goods beyond Ex-works sale will be of no import for determining POS of the Ex-works sale. 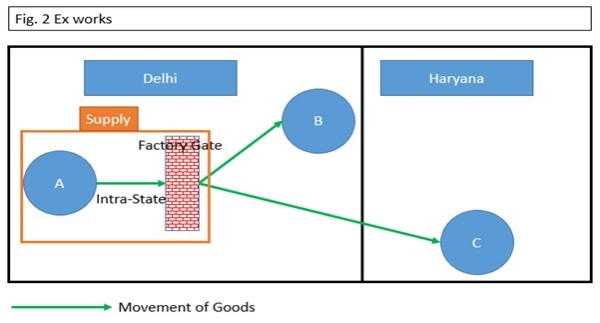 Having arrived consensus between in limb 2 and limb 3 vide point 3 above we can say that in Ex-works cases, the POS of goods will be that of premises of the recipient, it is only the limb 1, that we have to secure some comfort i.e. what does the term “the supply involves movement of goods”. Following points could be considered, then

4. Whether the words “involves” are verb or noun?

Perhaps that’s the most crucial ingredient of this limb, in determining what under which situation this limb gets triggered?

4.1 Taken as noun: If the words involves is taken as noun here, it means this clause provides for determination of place of supply in a transaction which involves movement of goods.

Let us says, X enters into two transactions with Y, (i) one for sale of Shampoo and (ii) another for sale of land, then this clause will be relevant for the former transaction i.e. sale of shampoo because this sale will involve movement of Shampoo, and this clause will not be relevant for latter transaction i.e. sale of land because this sale will not involve movement of land.

4.2 Taken as verb: If the words involves is taken as verb here, it means this clause provides for determination of place of supply of that particular supply only.

Enforcing this verb ideology to sales of goods cases, it means “movement of goods” during the supply, is only relevant for seeing what shall be the POS. The movement (if any) after completion of supply event doesn’t affect the POS already determined.

3. When is a sale or purchase of goods said to take place in the course of inter- State trade or commerce

Therefore, unlike GST Law, the determination of inter-sale is not dependent on “involves” of sale but on “occasions” of sale. The words “occasions” have stood the test of time, following observations as relevant for the current context can be noticed;

The word 'occasion' is used as a verb and means 'to cause' or 'to be the immediate cause of'.[Coffee Board, Bangalore vs Joint Commercial Tax Officer (1971 AIR 870)]

Within cl. (b) of S. 3 of the Central Sales Tax Act, 1956, are included sales in which property in the goods passes during the movement of the goods from one State to another by transfer of documents of title thereto and also covers sales in which movement of goods from one State to another is the result of a covenant or incident of the contract of sale and property in. [Tata Iron and Steel Co. Ltd. v. S. R. Sarkar and ors. (1954) S.C.R. 53]

Where under the terms of a contract of sale, the buyer is required, as a necessary incident of the contracts to remove the goods from the State in which he purchased the goods to another State and when the goods are so removed, the sale must be considered as a sale in the course of inter-State trade or commerce. [State Of Bihar & Anr vs Tata Engineering & Locomotive Co. 1971 AIR 477]

What is inter-State sale?

It is well settled by a catena of decisions of this Court that a sale in the course of inter-State trade has three essential ingredients:

(i) there……….. (ii) the goods must actually move from one State to another, pursuant to such contract of sale; the sale being the proximate cause of movement…….. [State Of A.P vs. National Thermal Power Corpn AIR 2002 SC 1895]

The above judicial pronouncements settles the fact the for being inter-state sale under CST Act, the movement of goods doesn’t necessary needs to be out of sale, it can even be the proximate cause of sale. When we see “sale occasions” it means movement prior to sale, during the sale or after the sale, but when we see “supply involves”, the movement in my mind should only be restricted only during the supply part.

6. Auction Sales completed at the Auction place itself

Let us discuss another peculiar case of Auctions, wherein also the problem of POS could arise. Auction sale (or supply in the GST Regime) are complete by the fall of hammer, per Sale of Goods Act [Kil Kotagiri Tea vs State of Kerela (1965) 16 STC 467]. Taking cue from said case, it should mean all Auction sales falls in the intra-state category, because POS in this case would always be the place at which the auction is happening.

Auction sales have also been studied from the point of view CST Act vis-à-vis Inter-state sales. Variety of judgments have been there, the Hon’ble Kerela High Court in case of [Ashish Kapur vs Forest Officer And Ors.  2005 141 STC 333 Ker] sums up the logics when an Auction Sales can be considered as Intra-state and when Inter-state. The stress is again on the word “occasions”, and as pointed in para 5 above, “occasions” is different from “involves”

3. Mr. Raju Joseph, the learned Government Pleader, has cited a Constitutional Bench decision of the Supreme Court in Kil Kotagiri Tea and Coffee Estates Co. Ltd. v. State of Kerala, [1965] 16 STC 467, which held that sale of goods in auctions is complete by the fall of the hammer under the Sale of Goods Act. In the said case, the question was whether the sale was completed within the area of Fort Cochin, which was hitherto in the State of Madras or Willington Island which was in the State of Travancore. Dealing with the question very comprehensively, it was ruled by the Supreme Court authoritatively that since the sale took place within the territorial jurisdiction of Fort Cochin, tax which is leviable by the State of Madras was payable. Learned counsel for the appellants seek to distinguish the ratio laid in the said judgment by relying upon the judgments cited in Consolidated Coffee's case , Co-operative Sugar's case and National Thermal Power Corporation's case.

5. The above three decisions relied upon by the learned counsel for the appellants lay down a legal principle that there should have been a pre-existing and binding obligation on the part of the purchaser of goods in any State to claim exemption from the State sales tax on the ground of inter-State movement. It is not enough if there is a wish or intention on the part of the purchaser to carry the purchased goods to his place of destination from the State where he had purchased such goods. But, it should be an imposition that should have been in existence even at the time of bidding in any auction or purchasing otherwise, so as to claim the sale as inter-State. It may not be necessary that such an imposition should be in express terms and it is suffice if it is implicit.

7. The whole conundrum gives rise to some other important questions,

Q1: When does a supply is said to be completed? [Be like, we know when does it commences]

Q2: Does movement of goods by a person is supply? Let us not answer any of these above in this article [Like I know it for real, *Sigh*]

8. How Ex-works can create chaos:

Imagine a case, “Alpha” of Haryana buys goods from “Beta” of Delhi on Ex-works basis. Beta treating Ex-works as Intra-state supply, charges “CGST & Delhi GST” on the invoice. Alpha is not registered in Delhi, what he is going to do with Delhi GST? He cannot use the Delhi GST against any of his output GST liabilities. Again, some people in knowledge are quoting that even CGST is also state specific i.e. CGST of Delhi is also not utilizable by Alpha. So Cost?

Now if in Ex-works case, POS of premises of Beta is taken, then Alpha will charge IGST. IGST is available as credit to Beta for discharging his output GST liabilities.

WORD OF CAUTION: Inherently it has been assumed that supply terminates as soon as the goods are sold by the supplier to buyer and all risk and rewards are transferred. The termination point of supply may need to be tested judicially.

Conclusion: I don’t have parting words, but it’s the tradition. The GST Legislature runs on the basic feature of seamless credit, so legislative intent is also important. I don’t know if the Place of supply section is badly crafted or not.

I am kind of delusional. *Laugh* A special thanks to Mr. V. S. Datey for his brilliant book on CST Act, and Frank Lampard.

Thanks
The author can also be reached at manish619sachdeva@yahoo.in