For those opting for Aadhaar authentication, new GST registration will be issued within three working days and would not need to wait for physical verification. However, those not opting for Aadhaar authentication for GST registration would be granted it only after physical verification of the place of business or documentary verification which may take up to 21 working days or more if notice is issued. – (Source Newspapers) 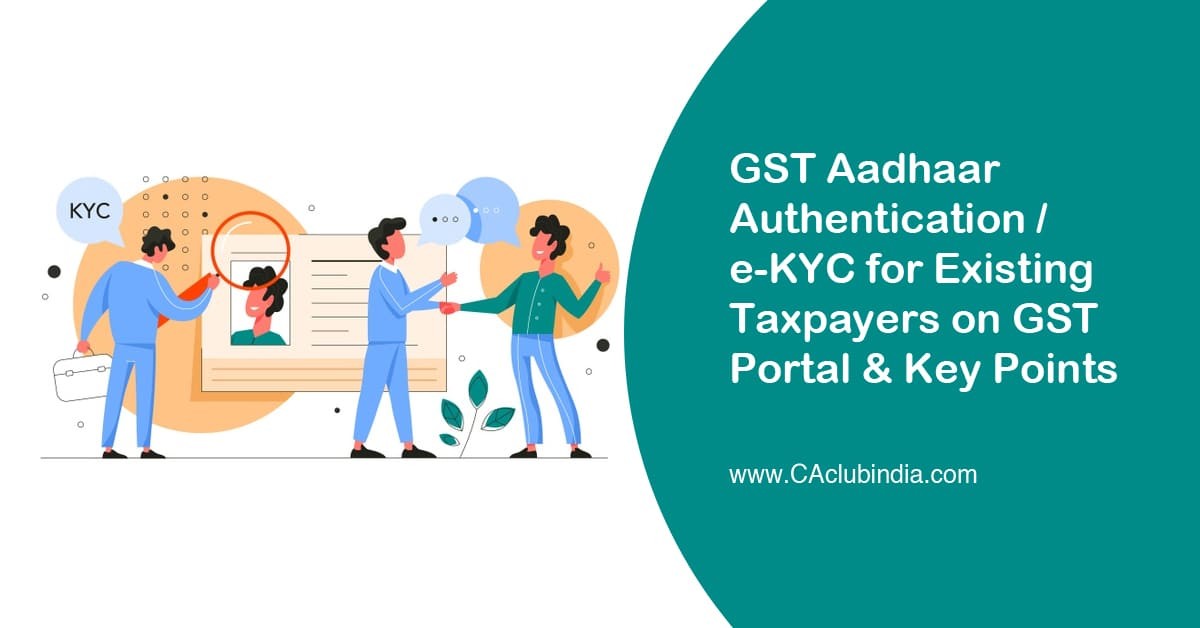 1. For Existing Taxpayers on GST: Functionality for Aadhaar Authentication and e-KYC where Aadhaar is not available, has been deployed on GST Common Portal w.e.f. 6th January 2021.

2. All taxpayers registered as Regular Taxpayers (including Casual Taxable person, SEZ Units/Developers), ISD and Composition taxpayers can do their Aadhaar Authentication or e-KYC on GST Portal.

3. Non Applicability: This is not applicable for

Brief about Aadhaar Authentication or e-KYC

I. If Aadhaar is available, the Primary Authorized signatory and 1 person who is Proprietor/Partner/Director /Managing Partner/ Karta of the entity registered can go for the Aadhaar Authentication.

II. In absence of Aadhaar, they can upload any of the following documents to undergo e-KYC:

How to do Aadhar Authentication/ e-KYC on Portal?

Kindly note that: If the same person is Primary Authorized Signatory and Partner/Promoter, Aadhaar authentication is only required to be done for that person

On the My profile page, in addition, to SEND AADHAAR AUTHENTICATION LINK, UPLOAD E-KYC DOCUMENTS option would also be displayed to the taxpayer from where they can upload the e-KYC documents on Portal. In this case, the process of e-KYC authentication would be subject to the approval of uploaded e-KYC documents by Tax Official.

1. As the Aadhaar authentication link will be sent on registered Email ID and Mobile Number, the OTP received on both will be same/common.

2. If the Aadhaar Authentication link gets expired before any of the persons tried to authenticate Aadhaar, the taxpayer will need to again select option from pop-up to send Aadhaar authentication links to them. Only after that both persons shall receive the links and reminders on 5th, 10th and 15th day.

3. You will receive an authentication link for Aadhaar on the mobile number and e-mails IDs of the selected Promoters/ Partners or Primary Authorized Signatories, as mentioned in the registration application.

5. If Tax Official approves the EKYC document, then the taxpayer will be considered as E-KYC Authenticated and not Aadhaar Authenticated.

6. Once a taxpayer has uploaded the documents then an ARN will be generated and it will go to the Tax Official queue who can either approve or reject the documents.

Disclaimer: Every effort has been made to avoid errors or omissions in this material. In spite of this, errors may creep in. Any mistake, error or discrepancy noted may be brought to our notice which shall be taken care of in the next edition. In no event, the author shall be liable for any direct, indirect, special or incidental damage resulting from or arising out of or in connection with the use of this information.