The concept of 'Class Action Suits' was first introduced in the US, also known as 'Representative Action', which is usually a form of court case, filed by larger group of people collectively who has suffered same or similar injuries. However the same was not new India.

Lately in year 2005, it was recommended by 'J.J. Irani Committee Report2' the principle of 'Class/Representative Action' by one shareholder on behalf of one or more of the shareholders of the same kind have been allowed by courts on the grounds of persons having same locus standi.'

Post the Satyam Scandal, the Indian Parliament drafted the Companies Bill 20093 and introduces the provisions enabling shareholders to file class action suits providing a way out to small or minority group of stakeholders for redressing their grievances apart from stakeholders like Creditors, Bankers, debentures holders etc. and later in Companies Bill 2011. Thereafter the 2013 act has now introduced the concept of class action under section 245.

What are Class Action Suits under the Company Act, 2013?

The provisions governing Class Action is set out under the Section 245 of the Companies Act, 2013 which falls under the Chapter XVI 'Prevention of oppression and Mismanagement' notified on 01st June, 20164. It contains ten different sub clauses and provides procedures & reliefs thereafter.

SECTION 245 allows specified categories of Petitioners5, who forms a common opinion about the grievances against the mismanagement of company affairs (other than banking companies) by its directors, auditors or advisors, and can collectively approach (on behalf of all) the NCLT for redressing their situation.

Introduction of this section places greater liability not only on management but on auditors & advisors so associated to act responsibly.

This relief is in addition to the Oppression & Mismanagement of the Company covered under the Section 241 & 244 of the Act. The members now can file application under 241 as well as under 245 separately and distinctly, however remedies available under the two are different, Section 241 to 244 seeks greater array of remedies to specific members, however there is no such concept of waiver under section 245. 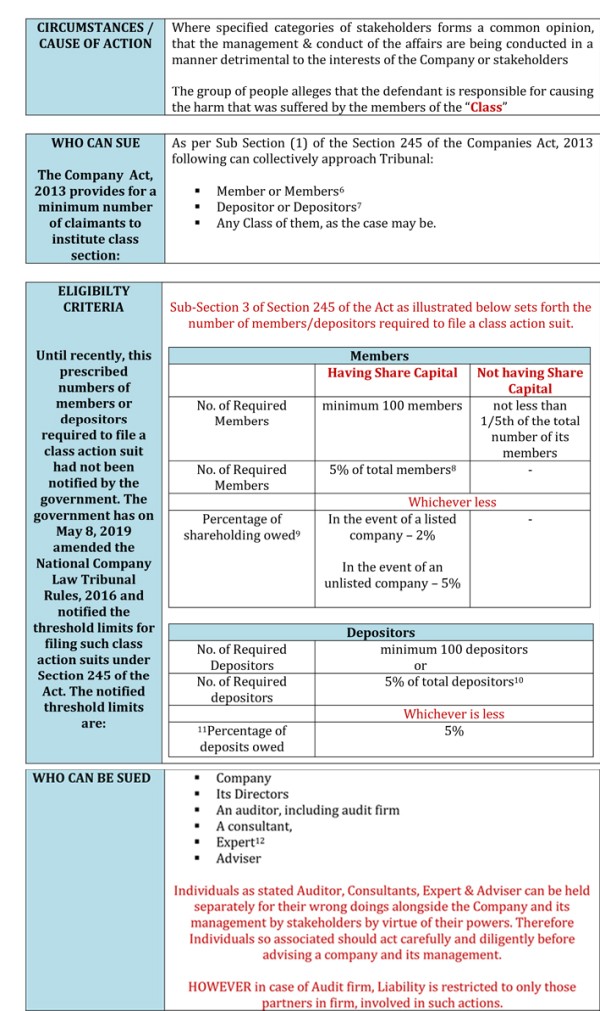 A separate provision has also been incorporated under SECTION 37 of the Companies Act, 2013 which is too the extent similar to Section 245:

Where affected persons may file suit or any other action may be taken under Section 3413 or Section 3514 or Section 3615, they may be any person or a group of person or association of person. A suit instead of application with NCLT can be filed.

However there is no minimum number of persons required for filing such suit as required under section 245 of the Act,

How to file Class Action Suit?

• A copy of application also needs to be serve to the Company, Regional Director, Registrar of Companies, others respondents and all such persons as the Tribunal may direct;

• The Tribunal after taking into account the points as mentioned in Section 245(4) and rule 85 of NCLT Rules, 2016, may admit or dismiss the application;

• Under Oppression & Mismanagement, the Petitioner cannot ask for documents from the Company - Mohta Bros P Ltd. Vs. Calcutta Landing and Shipping Co (1970) 40 Comp. Cas. 119 Cal, so exchange of evidence (documents) is not permitted as permitted in Federal Law.

• As per sub section (8) of section 245 of the Act Where Application filed before the Tribunal is found to be frivolous (not having serious purpose or value) or vexatious, Tribunal may reject such application & accordingly do so by mentioning the reason in writing and also may direct pay such as costs not exceeding 1 Lakh.

In an application following reliefs can be sought:

• From committing any act contrary to the provisions of the 2013 act or any other applicable law, and declaring a resolution altering the MoA or AoA of the company as void if the resolution was passed by not disclosing material facts or by misstatement to the members or depositors.

These reliefs are akin to preventive reliefs and are based on the principles under the Specific Relief Act, 1963.

• The cost of aforesaid public notice will be borne by applicants and shall be later discharged by company or person so held responsible in case order is passed in favour of applicants.

• In case any applicant wants to opt-out of the proceedings after the institution of suit, applicant may do so with the permission of Tribunal by filing Form NCLT-1 as per rule 86 of NCLT Rules, 2016;

• Order so passed by the Tribunal shall be binding on Company and all its members, depositors and auditor including audit firm or expert or consultant or advisor or any other person associated with the company.

Penalty on non-compliance of order passed:

Company shall be liable with fine: Rs 5 Lakhs to Rs 25 Lakhs
Other Personnel: Fine: Rs 25000/- to Rs 1 Lakh Imprisonment: May extend to 3 years terms

Disclaimer: Appreciate your support and so happy to have you as reader.

This article is only knowledge sharing initiative and is not intended to be a part of any advertising. The information contained therein is of general nature and the entire contents of this document have been developed based on relevant information and are purely the views of the authors. Though the authors have made utmost efforts to provide authentic information however, the authors expressly disclaim all or any liability to any person who has read this document, or otherwise, in respect of anything, and of consequences of anything done, or omitted to be done by any such person in reliance upon the contents of this document . READER SHOULD SEEK APPROPRIATE COUNSEL FOR YOUR OWN SITUATION. AUTHOR SHALL NOT BE HELD LIABLE FOR ANY OF THE CONSEQUENCES DIRECTLY OR INDIRECTLY.